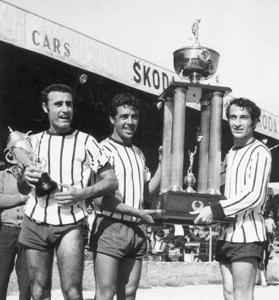 The clash for the Sons of Malta Cup in 1970 between league champions Sliema Wanderers and FA Trophy holders Hibernians ended in a 0-0 draw.

At the time, Sliema Wanderers were on a long unbeaten run while Hibernians had not won against the Blues in their last six encounters.

With these statistics in mind, it was no wonder that both teams took to the field with only one aim... to win, or rather not to lose, at all costs.

The outcome was an inevitable draw, which left everyone, at least for the time being, quite satisfied.

It was anybody’s game.

Joe Cini opened the scoring only for Charlie Micallef to equalise for Hibernians.

Once again, the game went into extra-time and it looked odds-on that the issue was to be decided by a penalty shoot-out.

Then, some slack marking by the Sliema defence left Lorry Young unmarked. The Hibs youngster lobbed the ball into the penalty area and Sliema goalkeeper Vella seemed to have the cross covered only to let the ball slip from his grasp.

The ball hit the underside of the crossbar and rebounded into play as Charlie ‘Dunda’ Micallef flashed in to score the winner.

Hibs’ hero that day was obviously Micallef but the star of the match was ‘maestro’ Eddie Theobald. He played one of the best games of his illustrious career.

His artistry and magic lifted Hibernians. He dominated midfield to such an extent that he made the Sliema midfielders look average by comparison.

Eddie Theobald was born in Paola on September 28, 1940. One of the all-time greats of Maltese football, he was one of the most noted players of the sixties and seventies.

Theobald came from a great football family which included his father Turu and his brothers Louis and Ronnie. As a midfield player, he had no equal.

His skills, accurate passing and intelligent play made him an automatic choice both for his club Hibs and the national team. Theobald earned 17 caps for Malta.

He joined Hibernians in March 1956 as a minor and made his league debut in season 1958-59 against Floriana. Hibs won that match 2-0 and from then on, Theobald never lost his place in the team, helping the club to win its first three championships. Theobald was voted footballer of the year twice, in 1966-67 and 1970-71.

Theobald soon became the darling of the Hibs supporters.

His lean frame, his elegant style and the way he fluttered his way through opposing defences earned him the nickname ‘l-għasfur’ (the bird). One could not possibly think of a more appropriate nickname for this dazzling footballer.

His dribbling rivalled that of his father Turu. His contemporaries considered the elder Theobald as the greatest dribbler in the history of the Maltese game.

He was rarely substituted and was never suspended. These facts say a lot about the skills and character of this great footballer.

In a bold bid to build a new squad for the future, they decided to ditch the old team in favour of their minor side who were introduced en bloc in the First Division.

It was a move which was to pay rich dividends in the future. However, no-one expected Hibs to part with Eddie Theobald.

In a controversial deal, which many Hibs fans still talk about up to this day, he was transferred to Żebbuġ Rangers for the ridiculous sum of 200 pounds.

Theobald stayed for three seasons with Żebbuġ Rangers. Much of his old magic was still there to the delight of the Żebbuġ fans and the dismay of the Hibs supporters.

The Rangers’ team was, however, not of the same standard as Hibs. In 1977 they were relegated, prompting Theobald to retire.

After his retirement, Theobald took up coaching but, after a while, he quit competitive football altogether.

His love for the game, however, never wavered and until he retired from service in 2000, he was a physical education instructor with the Department of Education.

Theobald played many great matches in his career but in my opinion, his best performances were against Chelsea FC in 1963 and the 1970 Sons of Malta encounter.

Malta had lost one of its greatest football stars.