War came to Malta before the formal British declaration of war on Germany on August 4, 1914, as the Royal Navy had just left the Grand Harbour in pursuit of the German battle cruiser Goeben.

The British Mediterranean Fleet, located in Malta, was normally the most important among its fleets as it was the largest and had the newest battleships. But that changed a decade before the war, with the establishment of three equal fleets of the Channel, Atlantic and Mediterranean.

Malta hosted a garrison of five battalions of British regulars, while two battalions of the King’s Own Malta Regiment of Militia were immediately mobilised. The Maltese quickly volunteered to join the Royal Navy and the British Army. About 24,000 served in the Great War, a substantial number considering Malta’s population of 219,000 at the time. Just over 500 Maltese perished during WWI. 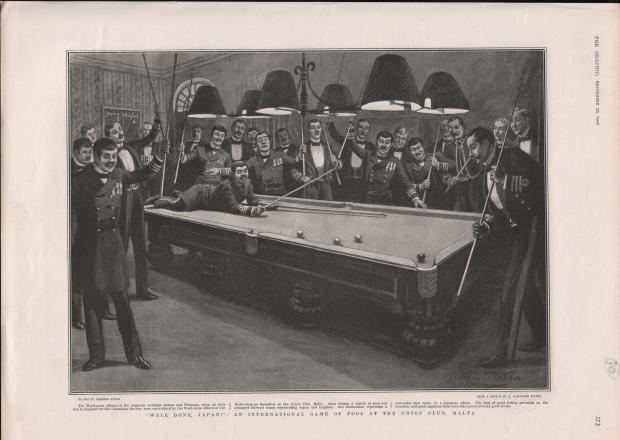 Game of pool between Japanese and English soldiers at the Union Club, 1902.

The only Maltese unit to serve in combat was a small detachment of the Royal Malta Artillery that saw action at Gallipoli. Both battalions of the King’s Own Malta Regiment volunteered for front-line service, but served as stevedores unloading supply ships, one battalion on the Salonika front and one at Gallipoli. A composite battalion of Maltese militia served in the Cyprus garrison during 1915.

Malta’s biggest role came by acting as the ‘Nurse of the Mediterranean’, repeating what happened during the Crimean War, by tending to wounded soldiers from the fronts at Salonika and Gallipoli. In August 1914, Malta housed three military hospitals with 389 beds; by the war’s end Malta had 27 hospitals with 25,000 beds serving casualties from Gallipoli. Over 135,000 wounded passed through Malta’s hospitals. Malta also housed two prisoner-of-war camps for Turkish prisoners.

Malta’s admiralty dockyards were engaged in full swing. It was not surprising that the war brought full employment, sending food prices soaring, with the consequent unrest at the dockyard in May 1917.

Malta’s crucial contribution came through the Royal Navy’s command operations of the Mediterranean theatre, with huge troop movements and the consequent need to transport wounded personnel to hospitals in Malta and Egypt.

Following the Battle of Jutland, the main British fleet with its dreadnoughts and battle cruisers was held at Orkney, north of Scotland, deterring the movement of the main German fleet, which was kept in harbour. Thus, most of the naval activity was rendered through submarine activity of the Central Powers terrorising ship movements, and Entente destroyers chasing them.

The slaughter on the Western Front meant that a constant stream of reinforcements was needed. If the Mediterranean route was squeezed shut, French and British Empire troops had to go all the way around the southern tip of Africa to reach the eastern Mediterranean war area.

The Mediterranean was covered by British, French and Italian fleets but lacked naval support.

The French Mediterranean Fleet operated from Malta from August 1914, but left for Argostoli in view of training difficulties and to prohibit sailors visiting whorehouses.

Britain, by signing a mutual defence treaty with Japan in 1902, handed the main responsibility for Far Eastern waters to Japan. After declaring war on Germany on August 23, Japan captured the German base of Tsingtao in China and occupied the German Marshall and Caroline Islands.

The Imperial Japanese Navy filled the vacuum created by the shrinkage of Royal Navy operations and played an important role in patrolling a substantial part of the world’s sea lanes. Japanese warships helped escort ANZAC troopships across the Indian Ocean and hunted Entente ships in the East Indies and Indian Ocean, including the chase on the von Spee’s squadron in the Pacific leading to the Battle of the Falklands. In February 1915, the Imperial Japanese Navy helped British forces put down a mutiny in Singapore.

The Japanese were the first to launch an air attack from the sea using a seaplane carrier during their assault on Tsingtao. 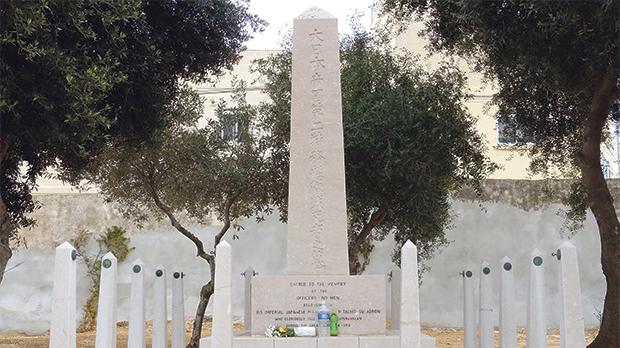 The Japanese WWI memorial at the Naval Cemetery, Kalkara, where the 68 Japanese sailors killed in the attack on the Sakaki lay buried.

Britain made repeated requests to Japan to assist in the European theatre, but Japan resisted splitting its military capabilities.

Then on February 10, 1917, the Japanese Cabinet conceded to British requests by creating a Second Special Squadron. Just a week later the flotilla left Japan for Malta via Singapore, Colombo, Aden and Port Said. It consisted of eight destroyers, the Ume, Kusunoki, Kaede, Katsura, Kashiwa, Matsu, Sugi and Sakaki, under the command of Admiral Sato Kozo on board the cruiser Akashi. It entered its base at Grand Harbour on April 16, 1917, escorting the Saxon, an English troop transport, from Port Said.

By then, German and Austrian submarines operating in the Mediterranean were sinking Allied shipping at an alarming rate. In April 1917, Allied losses totalled 218,000 tons, seven per cent of total sinking during the entire war. By the end of WWI, the Allies lost 12 million tons of shipping, a quarter in the Mediterranean.

The Second Special Squadron began its escort duties by protecting Allied shipping between Marseilles, France, Taranto and Cairo. Its arrival was timely, with vital reinforcements shifting to France after the bloody offensives at Arras, Chemin des Dames and in Champagne.

Japanese warships participated in the dramatic rescue of troops from the torpedoed transport Transylvania on May 4, 1917. Some 413 men died in this tragedy off the French coast, but Japanese, French and Italian naval forces saved most of the 3,000 troops despite the danger of further torpedo attack. The Admiralty congratulated the Japanese admiral for their sterling support.

The Japanese navy relieved the Akashi in June 1917 with the armoured cruiser Izumo, and reinforced the Malta squadron with the destroyers Kashi, Hinoki, Momo and Yanagi. As the tempo of anti-submarine operations in the Mediterranean accelerated, Japanese sailors temporarily manned two British gunboats, which they designated the Tokyo and Saikyo, and two British destroyers, renamed the Kanran and Sendan.

At peak strength in 1917, the Japanese Mediterranean flotilla numbered 17 warships.

Most Japanese wartime losses, apart from the Tsingtao operation, were due to accidents, but a hundred years ago, on June 11, 1917, the Sakaki was hit by a torpedo fired from the Austrian U-Boat U-27 off Crete, with a loss of 68 sailors. Despite the heavy damage to its bow, the ship remained afloat and was repaired. A memorial in their commemoration was set up at the Kalkara Naval Cemetery where the sailors lay buried. The memorial has been maintained during the last century by the Commonwealth War Graves Commission.

The importance of Japanese escorts dramatically increased when in 1918 the Germans launched their spring offensive on the Western Front. The British responded with further large movements of troops from the Middle East to Marseilles. 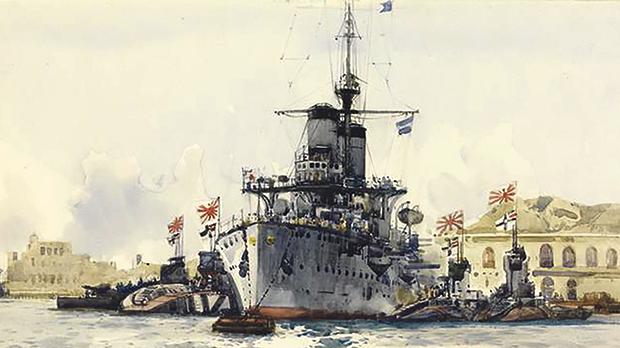 Japanese units escorted more than 100,000 British troops directly across the Mediterranean during the critical months of April and May. After the crisis ended, Japanese warships convoyed troops from Egypt to Salonika in support of the allied 1918 autumn offensive.

After the armistice, the Second Special Squadron helped supervise the Central Powers’ surrendered fleets. The Izumo and two destroyers left Malta for Scapa Flow to help guard the German fleet and prepare for the return to Japan of seven surrendered German submarines. In Brindisi the Japanese assisted in supervising German and Austro-Hungarian ships surrendering in the Mediterranean, while in Constantinople the Nisshin and eight destroyers superintended enemy warships.

The Izumo component arrived in Malta with the seven German U-boats from Orkney in March.

The crew of the ships took part in the 1919 Paris and London victory parades.

On April 10, the squadron made the last Mediterranean port calls, including to Naples, Genoa, and Marseilles. The Second Special Squadron left Malta for good on May 15, reaching Yokosuka on July 2, 1919.

By the end of the war, the squadron had engaged German and Austrian submarines 34 times; escorted 788 ships across the Mediterranean, safely transporting more than 700,000 troops to the Western Front. Its destroyers made 53 port visits around France, Britain, Italy, Belgium and Greece.

The Japanese were lavishly praised for their performance in the Mediterranean by British leaders. Winston Churchill, who as First Lord of the Admiralty when the war started, was the driving force behind British and Japanese naval cooperation. He “did not think the Japanese [Squadron] had ever done a foolish thing”.

Governor of Malta, Lord Methuen, while reviewing Japanese warships in March 1919, lauded the Japanese navy for “its splendid work in European waters” and expressed the hope, that “God grants our alliance, cemented in blood, may long endure”.

On August 21, Admiral George A. Ballard, senior naval officer-in-charge in Malta, reported to the Admiralty that the Japanese had rendered invaluable service in escorting troop transports since their arrival in Malta. He said that until the engagement of Japanese destroyers the Allies had been short of escorts. Ballard praised their operational capacity by pointing out that the Japanese spent 72 per cent of their time at sea compared with 60 per cent by the British and 45 per cent by the French and Italian navies.

The Japanese navy was engaged for 26 days per month and its operation distance reached 6,000 nautical miles in a month. 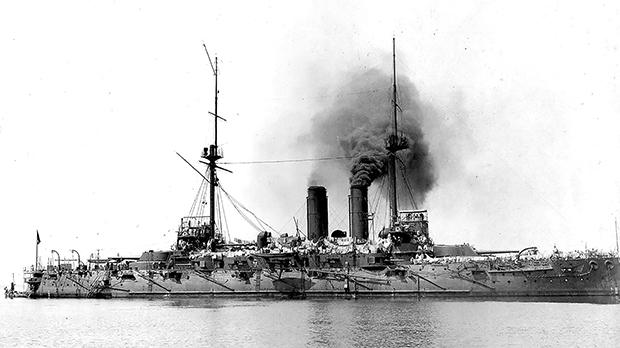 This record clearly demonstrated the dedication of the Japanese naval officers. The commanders of several Japanese warships were reported to have committed Hari-Kari when ships they were convoying were lost.

However, in A Diary of Mediterranean Expeditions, Kondo Eiichiro and Chichukai Ensei Nittuki state that there was resentment among the Japanese crew for being kept on constant alert, facing consistent rough seas and kept in rolling, small destroyers. Complaints were made that Admiral Sato complied with all British requests, and uneasiness among the crew led to some committing suicide.

Despite the strong record of Japanese assistance the Anglo-Japanese Alliance lapsed in 1921. The contribution of the Second Special Squadron has largely been relegated to the footnotes of history. One reason for this is that less than 500 Japanese perished in combat operations, a stark contrast to losses by other nations like France, which suffered 1,400,000 deaths.

In April 1921, Crown Prince Hirohito visited Malta as part of his first European tour and visited the Kalkara cemetery to pay homage to the Japanese sailors who perished in the Mediterranean. Five years later, Hirohito became the 124th Emperor of Japan and reigned for 62 years until 1989.

Today, Japan’s navy is the fifth-most powerful in the world, despite it being only a self-defence force.

Mario Buttigieg is the deputy high commissioner at the Maltese High Commission in London. He represented Malta at the Centenary Commemorations of the Battle of Jutland held in Kirkwall on the Orkney Islands on May 31, 2016. This article is in appreciation of the dedication by naval officers of the Second Special Squadron of the Imperial Japanese Navy to the European common good that has largely gone unnoticed for a century both in Europe and Japan.