The first arrivals in Malta of the wounded soldiers from the theatres of war made history. A stream of ambulance wagons and motor-cars swept through Valletta on their way to the landing places, attracting crowds of spectators along the route. Afterwards, the vehicles returned in different directions for the hospitals and other places where accommodation had been provided. In Strada Reale, “hats were raised and handkerchiefs waved as the vehicles approached, the crowds pressing forward to catch a glimpse of the soldiers recumbent on stretchers or seated”.

From among the frequent arrivals from the Dardanelles, one would single out “a remarkable episode providing the material for a romance in real life”. The ship was moored in Sliema Creek. “During the landing of the wounded, the shrieks of a woman were heard among the crowd. The excited woman had recognised her husband whom she had not seen for nine years.”

British wounded from the Balkan front were brought to Malta, which provided hospital accommodation for well over 18,000 sick and wounded. The island’s resources were taxed to the utmost

The hospital ship Asturias, with wounded from the Dardanelles, was torpedoed in the channel but the torpedo missed its mark. Arrivals included the New Zealand hospital ship Maheno.

The French government placed at the disposal of the French Red Cross, a vessel belonging to the Messegeries Maritimes, the Charles Roux, which was fitted out as a hospital ship. It was used for both French and British casualties.

For the first time since Italy’s intervention in the world conflict, the hospital ship Re d’Italia of Lloyd Sabaudo Coy arrived in Malta, and berthed at Sa Maison. Four Maltese doctors, namely P. Biasini, Balzan, Azzopardi and Inglott, and several English nurses, proceeded with the ship. Other Italian hospital ships followed. The Lloyd Sabaudo provided six of its fine fleet for the purpose.

The hospital ship Assaye arrived in Malta with a large party of Canadian and English lady nurses. The novel uniform of the Canadians attracted great attention. The ship was en route to the Balkans.

Sir Thomas Lipton’s yacht Erin arrived in Malta on her second voyage from South Hampton to Salonika. She was carrying a number of nurses and medical stores. Sir Thomas embarked on the yacht to Marseilles.

The British steam yachts Sunbeam, owned by naval writer Lord Brassey, and Liberty, owned by the eminent physician Sir James Porter, were converted into private hospital ships. They called at Malta en route to the Dardanelles.

A French ship arrived in Malta with 720 Syrian Jews, mostly French citizens. They were embarked at Beirut upon escaping massacre by the Turks. These refugees were being conveyed to Corsica.

Among the wounded who arrived in Malta were several Turkish officers, some of whom died of their wounds on board the hospital ship on their way to Malta. They were buried at sea.

Egbert Rizzo, a Maltese residing in Constantinople prior to the outbreak of the war, was deported to Urfa and was subsequently allowed to return to Constantinople with several other British citizens, including Maltese. The Turkish government issued instructions that all British citizens were to be well treated.

The more serious cases were sent on to England from Malta, while a good number of the first arrivals left Malta to rejoin their respective regiments.

Strong contingents of medical officers and trained nurses continued to arrive from England and were absorbed in the various hospitals on the island. Male nurses at the Central Civil Hospital, Floriana, spontaneously offered to devote their off-duty days to the wounded in the hospitals. When Italy joined the Allies, plans were mooted towards establishing convalescent homes in Sicily.

British wounded from the Balkan front were brought to Malta, which provided hospital accommodation for well over 18,000 sick and wounded. The island’s re­sources were taxed to the utmost.

As the conflict continued, a local newpaper wrote: “Funeral services will be held in the churches of the island by order of the Archbishop for the souls of those who have fallen in the war. It would be suggested that the people of this island might give further appropriate expression to the feelings which animate them by bedecking with flowers the honoured graves of those who succumbed to their wounds in Malta.”

It would be added that the ringing of bells “so highly favoured by custom is not always a necessity, especially in view of our limited area, so we trust that bell ringing will be restricted as much as possible in certain areas”.

In the event of any cases of cholera developing on board a hospital ship during the voyage to Malta, the patient was to be at once transported to Comino, where arrangements were made for a small hospital. If disembarkation was impossible, the patient would be taken to the Lazarette on Manoel Island, where complete isolation was arranged. If any cases of cholera occurred at the Dardanelles, they would be treated at Lemnos.

Following an appeal for help in connection with the housing of convalescent patients, unfurnished private houses in different parts of the island were placed at the authorities’ disposal

There was a remote danger of cases developing on board ship. For this reason, Governor Methuen set up an ad hoc committee which included Dr G. Caruana Scicluna, Prof. Temi Zammit and Dr A. Critien to decide on the best means to meet this possible danger.

Following an appeal for help in connection with the housing of convalescent patients, unfurnished private houses in different parts of the island were placed at the authorities’ disposal, including the Archbishop Palace in Mdina.

The Marchesa Scicluna placed at the disposal of the authorities the palatial Villa Dragonara. The Carmelite Friars offered the upper floor of their convent at St Julian’s. The Vincenzo Bugeja Institute at Ħamrun was equipped as a hospital. The Army Pay Office at Auberge de Baviere in Valletta was moved elsewhere and the building converted into a hospital.

The government school in Sliema was turned into a hospital to house 450 patients; it was known as St John Hospital. Nevertheless, school started as usual as alternative premises were made available, including the Juventutis Domus and part of the Carmelite Convent by Fr O’Grady and Rev. Prof. A. Cuschieri, respectively. San Anton Palace and Verdala were also used to accommodate patients. 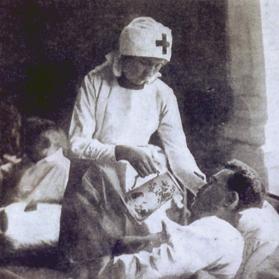 During the war years the Malta Centre of the St John Ambulance and the British Red Cross Society were amalgamated for the better and more efficient organisation in aid of the sick and wounded. They became known as the Ladies Committee, which was composed as follows: The Countess Lucan, Miss Calvocoressi, Mrs Clapp Zammit, Mrs F. P. Denaro, Mrs A. M. Galea, Mrs Lewis Hall, Miss Gatt and Mrs Pringle.

The committee actively supplied caps, mufflers, gloves (these were with a thumb piece but without divisions for the fingers), mittens (with short fingers or at least a knitted hole to cover the palm and were long above the wrist). The government provided for exemption of custom duties on gifts to the troops received from abroad.

A novel initiative was the holding of a hospital football league. Some 17 hospitals entered their teams. One of the first matches, which took place at the Marsa, was played between two Royal Army Medical Corps teams – Valletta Hospital and Baviere, ending with the score: Baviere 2, Valletta Hospital 0.

Another novel idea was the setting up of a club for nurses; they used to meet in the Ladies Room at the Union Club.

There were excellent reports of the services rendered by the Boy Scouts, who found in the new arrivals ample opportunities for exercising their training. “These little handy men have been a great use to us, strangers to the island, and their willingness and energy have been much anticipated.”

This was the general scenario and overall atmosphere prevailing throughout the island in the turbulent war years.

No wonder Malta earned the title of “nurse of the Mediterranean”.

Snippets from local newspapers during WWI

• News reached Malta that the battleships Majestic, flying the flag of Rear-Admiral Stuart Nicholson, Triumph, Irresistible, Ocean and Goliath were sunk; the latter was torpedoed by a Turkish torpedo boat commanded by a German naval officer, Lieutenant Firle. Among the crews of the British warships were several Maltese.

• When the Suez Canal was cleared of all shipping, some 40 ships that belonged to the enemy were seized by British warships. German merchant steamers were reported hurriedly leaving the port of Syracuse.

• Two large liners, Knigin Emma and Prinses Juliana, which were believed to be of German nationality, carrying munitions of war, were captured off Messina and conveyed under French escort to Malta. It later transpired that the liners were Dutch, with 250 passengers on board, including seven Germans who were landed as prisoners of war. The two liners subsequently left for their original destination.

• An unprecedented event was witnessed at the funeral of Rudolf Huber, a native of Bavaria and major in the German Army. He was undergoing treatment at the military hospital in Cottonera, where he died following an operation.

The funeral took place with full military honours. It attracted large crowds. A firing party of 200 men of the 2nd Battalion King’s Own Malta Regiment of Militia under the command of Major J. V. Aspinall took part. The band of the battalion played funeral marches.

The coffin was covered with the German flag. A single wreath rested on the coffin inscribed: Major Huber, von seinen Landsleuten, Malta, December 12, 1914. On arrival at the Addolorata Cemetery the firing party was drawn up on either side of the avenue to admit the entrance of the gun carriage. The service was impressively read in English by Rev. Fr J. Verzin, assisted by Rev. Dr Bourne of the Dominican Order. The coffin was lowered in a temporary grave, pending removal to Germany.

• A somewhat strange find occurred off Wied iż-Żurrieq when a fisherman found an empty wooden box floating in the water. The box, measuring 45cm by 23cm, had an appearance of a medicine chest. It was labelled SM Goeben, Neapel.

• Dr Thomas Ashby, director of the British School in Rome, who was well know in Malta as an archaeologist, and Ven Buren, librarian of the American Academy in Rome, had a rather amusing experience. The two men were seen wandering on the sea coast and were mistaken for German spies, and arrested. But the misunderstanding was soon cleared up.