Malta has set a new world record for hosting the deepest growing precious red coral in the world.

Numerous colonies of the red coral (Corallium rubrum) was found to be growing at depths of 1,016 metres in the sea around Malta – over 200m deeper than the previous record, which was also found in Maltese waters.

The discovery was made during two separate expeditions, con­duc­ted in 2015 and 2016 as part of the Life Baħar for N2K project, during which an under­water robot equipped with a video camera was used to explore the seabed down to depths of over a kilometre.

The team of scientists from the NGO Oceana, who conducted the surveys, and from the University of Malta’s Department of Biology, which was  responsible for analy­sing the data, recently presented their findings at the 41st Congress of the International Commission for the Scientific Exploration of the Mediterranean (CIESM), held in Kiel, Germany.

Prof. Patrick J. Schembri, from the University’s Department of Biology, said “red coral colonies are usually reported at depths ranging between 15m and 300m depth, and had never been recorded at depths beyond 800m before. The colonies were part of a diverse community of living corals at depths of 300 to 1,000m. This record was a surprise to us all but it goes to show just how little we know about the sea that surrounds our own islands.” 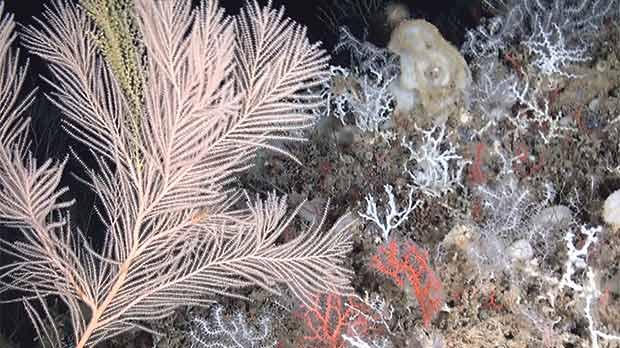 Several other interesting findings made during the surveys were presented at the CIESM congress. These included the discovery of a fossilised sponge reef at a depth of about 300 metres, deep-water caves located at depths of up to 450m, as well as vast expanses of sand/mud habitats, inhabited by diverse communities of species including some rare and threatened ones.

Ricardo Aguilar, expedition leader and research director at Oceana in Europe, said “most of the sites where we encountered diverse coral reefs had never been researched before, and the findings of the project indicate that the deep sea around Malta represents an important biodiversity hotspot”.

The Life Baħar for N2K project, through which these expeditions were funded, ultimately aims to ensure that vulnerable marine habitats, including deep water reefs, acquire protection through the designation of marine protected sites under Natura 2000, the European Union network that collectively safe­guards the EU’s most valuable natural areas. The information gathered during the surveys will enable the formulation of more effective conservation measures to address the identified pres­sures, including from marine litter and discarded fishing gear.