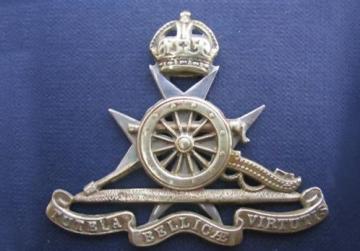 Coat of arms of the Royal Malta Artillery.

For the landings in Sicily on July 10, 1943, all the Allied commanders set up their headquarters in Malta, including that of the Supreme Commander General Dwight D. Eisenhower. The airfields, which a few months earlier resembled derelict scrapyards, now housed 32 British squadrons with 527 aircraft, while three US squadrons flew 75 Spitfires from Gozo.

Before leaving, Eisenhower wanted to leave a message to congratulate the people of Malta on their heroic resistance to the forces of the Axis. The message ended: “For this inspiring example, the United Nations will be forever indebted to Field Marshal Lord Gort, the fighting services under his command and to every citizen of the heroic island.” The Luftwaffe had stayed away but turned up in some force on July 20 and again at night on July 26 when the Grand Harbour barrage was fired, this time joined by the numerous ships in harbour. Vincent Attard of Żabbar lost his life and became the last person to be killed in an air raid.

April 3 became a very important date to the Royal Malta Artillery (RMA). The event could not be commemorated in 1943 as preparations for the invasion of Sicily were then in full swing. The first April 3 parade was held at the Floriana parade ground on April 3, 1944, under the command of the Regiment’s Colonel Commandant, Brigadier A.J. Gatt. OBE. M.C., who had retired from active service in 1941. The inspecting officer was the Governor and Commander-in-Chief, Viscount Lord Gort VC.

The parade, cheered all the way by the crowd, marched past the newly built but still unused Hotel Phoenicia, through Kingsway to Fort St Elmo. Lord Gort, attended by Brigadier Gatt, took the salute at the Palace Square. As far as the crowd was concerned, this was the victory parade; the war was won on September 8, 1943, when Italy surrendered and its fleet had sailed to Malta for protection from the Nazis.

However, for the Luftwaffe, Malta was still the enemy; later that month, on April 28, 1944, an enemy plane crossed the coast at 24,000 feet over Żonqor Point and 128 rounds of HAA ammunition were fired. That was the last time the sirens wailed in Malta and the guns had fired in anger.

Any member of the regiment in the UK in 1944, with his single Africa Star ribbon over his breast pocket, found it very difficult to pay for his half pint of mild and bitter

Leading the parade was the RA (Malta) Band – the RMA Band’s correct name at the time, as it depended on the Royal Artillery for its funds. It was the same band that, from the ramparts of Fort St Elmo, had greeted the ships of the convoys as they entered Grand Harbour after their ordeal, and especially Captain Mason’s tanker SS Ohio, with its decks awash and lashed on either side to a Royal Navy destroyer to keep it afloat with its precious cargo of oil that was vital to Malta’s survival.

The band was also on parade when King George VI, in a white admiral’s uniform, inspected the Guard of Honour provided by the RMA on landing at the Customs House from HMS Aurora on April 20, 1943.

Fort St Elmo was the site where the RMA suffered its first casualties in World War II. Six men, including a young Boy Trumpeter, were killed as they were running to their post during the early morning air raid of June 11, 1940, a few hours after Benito Mussolini had declared war. It was a massive shock to the regiment’s morale.

A young doctor, the unit’s medical officer, had the task of calming down the men and restoring their confidence. It was Captain Vincent Tabone, RMA, who many years later became President of Malta.

On July 26, 1941, just over a year later, the guns of Fort St Elmo repulsed a determined seaborne attack by an experienced Italian naval squadron to enter Grand Harbour. The bofors guns of the Third LAA Regiment RMA as well as the infantry machine-guns of the Cheshires, joined in the shoot. Spectators at Għar id-Dud, Sliema, and elsewhere cheered at each direct hit. RAF Hurricanes completed the rout at first light.

This is what the chief of the Imperial General staff had to say: “Please convey to all ranks of the Royal Malta Artillery manning the fixed defences on their success on breaking up the determined enemy sea-borne attack on Grand Harbour. The action of these gunners had excited universal admiration in the United Kingdom. The skill and determination shown by them will act as a strong deterrent to future enemy attacks.” 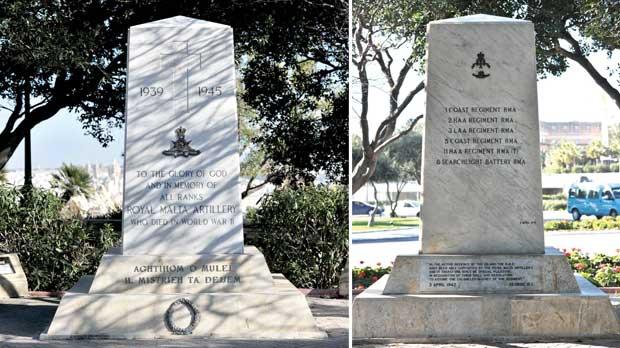 Front (left) and rear views of the memorial of the Royal Malta Artillery in Floriana. Photos: Jason Borg

Of course, Fort St Elmo had played a very important part in the Great Siege of 1565. The fort was greatly outnumbered by the invading Turks, who had to capture the fort before assaulting Fort St Angelo. Fort Elmo managed to resist for some weeks before being overrun. The delay may have been enough for Grand Master Jean de Valette to eventually make the Turks abandon the siege. Sadly, all the defenders of Fort St Elmo were slaughtered.

It would be a great pity if Malta forgets the part played by our forefathers during World War II in defence of their country and for freedom, democracy and peace

The Knights’ victory over the Turks made Malta’s name famous throughout Europe at the time. During World War II, Malta’s resistance against overwhelming odds, once again, made its name famous – this time worldwide. The Royal Malta Artillery acquired some of the credit. Any member of the regiment in the UK in 1944, with his single Africa Star ribbon over his breast pocket, found it very difficult to pay for his half pint of mild and bitter. The Royal Malta Artillery came out of World War II with flying colours.

The regiment had acquired a war trophy. It was the propeller of a Stuka Junker 87b dive bomber. It had crashed in January 1941 in a field between Benghisa and Ħal Far; one of the crew of two had a tooth with a gold filling. 7th HAA Battery RMA claimed that its troop at Karach had shot it down.

From a battery war trophy it eventually became the war trophy of the Royal Malta Artillery, finally becoming part of the décor of the Auberge de Castille when it housed the headquarters of both the Malta Command and RMA. Eventually 1st Regiment RMA became the 1st Regiment of the Armed Forces of Malta and moved its war trophy with it to Luqa Barracks. The credit acquired by the Royal Malta Artillery was not, however, superficial. This is what the members of a Defence of Bases Committee reported back to London towards the end of the war:

“In the case of Malta, the committee, with full knowledge of all that the Royal Malta Artillery had achieved in the war years, could see no reason why the RMA could not be responsible for the defence of the islands.”

While the study of Maltese history was neglected under British rule, there is no excuse now. It would be a great pity if Malta forgets the part played by our forefathers during World War II in defence of their country and for freedom, democracy and peace.

No enemy set foot on Maltese soil during World War II except as a prisoner of war.

Maurice Agius served in a HAA regiment of the Royal Malta Artillery during World War II. He is the author of Recollections of a Malta HAA Gunner.

• Three RMA officers were awarded the Military Cross and 12 other ranks the Military Medal, besides other awards.

• One RMA officer and 66 other ranks gave their life in defence of their country.