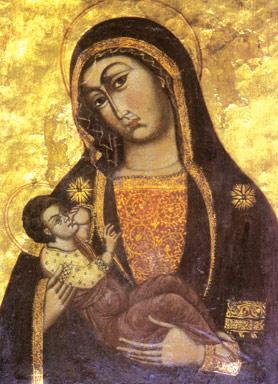 An early 13th-century, Siculo-Romanesque icon of The Virgin and Child known as the Virgin of St Luke, at Mdina Cathedral.

In the Late Middle Ages (AD1,000-1,500), Malta was no artistic wasteland on the extreme periphery of Europe; on the contrary, there were enclaves of artistic and architectural sophistication on the islands, particularly in Mdina and the Castrum Maris, with its suburb of Birgu, equalling if not surpassing other European cities. This artistic awareness demonstrates that when the munificent Order of St John arrived in Malta in 1530, our island was already aspiring to shed its insularity and enter the mainstream of European art and culture.

My deep fascination for this maligned period was rekindled when a few years ago a CD of Gregorian chant in their original arrangements reached no. 2 in many European cities’ music charts. A rival version of the 12th-century abbess Hildegard von Bingen, the visionary, dramatist, herbalist and first woman composer in Western history, was in the top 10 bestselling classical records. This image does not fit in with my memories of school history lessons where the period between the end of the great Pax Romana (27 BC to AD180) and AD1,000, known as the Dark Ages, always seemed confused and remote, a middle time when art and civilisation marked time.

But there is a much more sophisticated contemporary image following this time of darkness, namely the Late Middle Ages (AD1,000-1,500), embodied most famously in the seminal novel The Name of the Rose published in 1980 by medieval historian Umberto Eco. According to Eco, the roots of today’s European culture and society are embedded in the High Middle Ages, so “if there is a renewed fascination with the period it is part of a search for nourishment, a search for roots”.

Set in 1327, the novel debates a range of issues which could have been topical at the time. These included the aesthetics of light, the new style of architecture and the works of St Francis of Assisi, with his pleas for a balanced relationship with nature and disgust at the new market economy.

Encouraged by Eco’s fascinating images of the Late Middle Ages, I delved into the groundbreaking works of erudite medievalists Godfrey Wettinger and Stanley Fiorini and eminent art historian Mario Buhagiar to discover the cornucopia of artistic and architectural treasures in the Maltese islands emanating from that period. 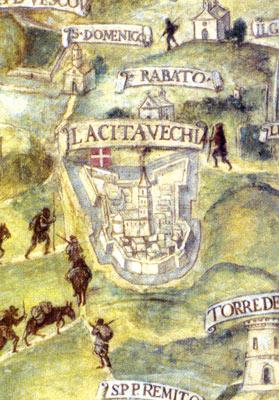 The medieval cathedral in Mdina. Detail from a fresco by Mattia Perez d’Aleccio at the Palace, Valletta.

With the gradual re-Christianisation of the Maltese islands in the 12th and 13th centuries, the population was once again immersed in another temple-based religion that gave the first impetus to an incipient artistic heritage. Unlike the nobility safely ensconced in the relative safety of Mdina and the Catrum Maris, whose patronage of the arts was focused on ways to accommodate one particular social class, the Church in Malta in the Late Middle Ages catered for all social classes as a great wave of innovation, restoration and embellishment engulfed the Mother Church, in the ancient cathedral in Mdina.

After the complete expulsion of the Arabs in the mid-13th century, securely documented evidence dated 1299 indicates that a new church dedicated to St Paul was erected on the remains of a previous basilica, a site rich in Christian traditions testifying to the re-establishment of a Pauline cult. Initially it must have been a humble Romanesque church consisting of a three-aisled basilica which was subsequently enlarged and embellished, particularly in the 15th century.

Surviving relics belonging to this period include the Madonna of St Luke, two precious antiphonaries, and the 12th century codex of the Gospel of great antiquity, known as Liber Sancti Pauli because of the image of the Apostle inscribed on its cover. In 1519, Joanni Scarpa, a Sicilian residing in Mdina, was commissioned to cover this coveted book in silver with the figures of St Paul on the front cover and the Crucifixion at the back. 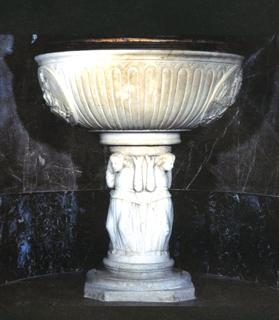 A baptismal font (1474) from the Palermo workshop of the renowned Domenico Cagini.

In 1474, the Mdina Cathedral commissioned a baptismal font from the Palermo workshop of the renowned Domenico Cagini. These precious items and many others can still be viewed either incorporated in the present cathedral or in the adjoining Cathedral Museum.

The extensive innovations, the artistic decorations, the provenance of outstanding objets d’art emanating from the best botteghe in Malta, Sicily and southern Italy in our Romanesque cathedral as well as the appointments of a maestro di cappella and a teacher for the grammar school in Mdina, are well documented in the Mandati Records. These documents (1473-1539), which were meticulously studied, analysed and published by Fiorini, present in detail the authorisation for payment for services rendered to the cathedral and the Università (town council). They are still preserved at the archives of the Cathedral Museum, testifying to the refined tastes of the cathedral administrators in their choice of established painters, musicians, craftsman, sculptors and decorators. 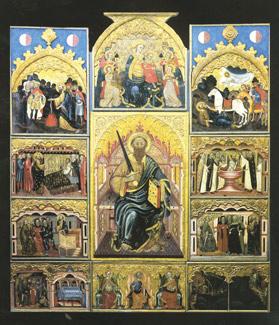 St Paul Enthroned, by the Circle of Luis Barossa (1360-1426). A polyptych that was previously Mdina Cathedral’s main altarpiece. Now housed at the Cathedral Museum, Mdina.

Visitors to the Cathedral Museum are visibly impressed by the magnificent paintings of St Paul’s Polyptych, one of Malta’s most important paintings. Formerly the main altarpiece of the old cathedral, the polyptych, attributed to the Circle of the Catalan Luis Borassa (1360-1426), was specifically com­mission­ed for the old Romanesque cathedral. Undoubtedly, a city that possessed such an outstanding masterpiece was not languishing in some cultural wilderness.

Most of these treasures are well known to those interested in the rich heritage of our islands but there are other artistic gems that pass unnoticed, such as the unique choral books executed by Maltese and Sicilian craftsmen. Nor was this upsurge in artistic appreciation exclusively in Mdina. The Franciscans at Ta’ Giesu church in Rabat in 1517 commissioned two large retables from the well-known artist Antonio de Saliba consisting of The Lamentation for Christ and The Madonna and Child Enthroned, which are still preserved in this church. 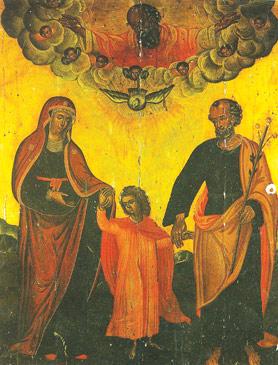 In the port city of Birgu, where the westernising influence was already being felt, in the Late Middle Ages there was enough artistic and architectural sophistication represented by a silver processional cross of Catalan origin or influence commissioned in the late 15th century, an early 16th-century painting of The Holy Family by an Italian master, The Madonna del Soccorso a 15th-century late Gothic painting originally at the Castrum Maris and later at St Lawrence parish church, by an unknown master inscribed with the date 1462. It was probably the central panel of a triptych in the underground Church of the Nativity; The Virgin Suckling the Child a 14th-century Italo-Byzantine painting. It is recorded in 1538 at the Dominican church in Birgu, which already had a beautiful edifice with an elegant campanile demolished in the post-war period. Both these paintings perished in the brutal German blitz of January, 1941.

The ancient icon of Our Lady of Damascus in one of the four Greek chapels can still be viewed in an attractive historic alcove of the Birgu parish museum. The proliferation of Siculo-Norman palaces in Mdina, and to a lesser extent in Birgu, as well as the medieval tower with its Carbuni bells from a Messina foundry in Birgu square, are also indicative of refined tastes.

I should also mention a monumental cemetery in Gozo demolished in the mid-1940s that bears witness to the high calibre of sculpture in the Angevin pariod (AD1270), as evidenced from some of the remaining tombstones scattered all over Victoria. Surely there is enough evidence of the essentially European ethos of these cities before the coming of the Knights in 1530. 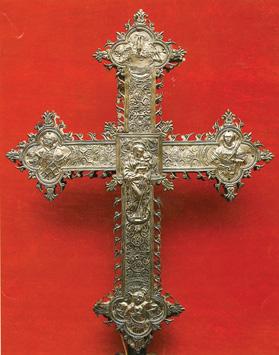 Malta’s musical history dates back to the early 13th century when the Provencal troubadour Piere Vidal was in Malta in 2004-2005 to sing the praises of the castellan Enrico Pescatore. Vidal’s poems on Malta and the Grand Harbour were minutely researched and published in the Melita Historica by the erudite Joseph Brincat.

In medieval Europe, church music was very popular, invariably expressed in song and prayer in poems and exquisite paintings. The choral books, in fact, emerged as one of the artistic triumphs of the Middle Ages, an expression of pious creativity which old monks designed and copied by hand, never to be surpassed in beauty by the countless products of the printing press.

Special artists, very active in Malta at that time, invariably used gold in leaf or powdered form in their artistic designs which spilled over gracefully into margins and borders. Liturgical music included such idioms as Gregorian chant and much later compositions by Giovanni Pierluigi da Palestrina, some of whose first editions are kept in Vittoriosa’s parish museum. These artistic achievements and cultural endeavours in Malta in the Late Middle Ages strengthen the assumption that in every genre of culture, Malta was never completely cut off from the European mainland. Undoubtedly, the Late Middle Ages cannot be sidelined in evaluating the evolution of the rich artistic, architectural and musical heritage of the Maltese islands.