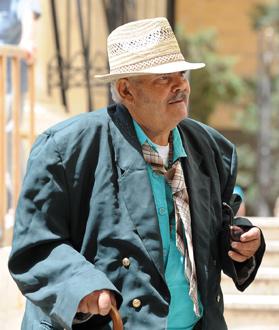 Ċikku Fenech pictured in 2010 when he was given a suspended jail term. Photo: Matthew Mirabelli

Ċikku Fenech, who 50 years ago was convicted of murder after infamously spending three months on the run, died yesterday aged 74.

Hailing from Mosta, Fenech had risen to notoriety in June 1963 after becoming Malta’s most wanted man following the murder of Ċikku Vella during a heated argument.

During this time speculation about his whereabouts ran rife with some even suggesting that he had fled to Australia.

Initially he had hidden in some caves in Tal-Pellegrin in the Ġnejna area, but eventually spent time at frequented spots such as the Paola main square which was a stone’s throw away from prison.

During this time he even used to date a girl from Birżebbuġa.

Eventually in late September he gave himself up to the police. Though he was found guilty he was not sentenced to death but was given a 15-year prison sentence, of which he served a good deal less.

In March 1976 he was back in the limelight following a shooting at the Mosta housing estate in which Kalċidon Zammit was grievously wounded. He was found by the police two days later hiding in a haystack in his mother’s house. Eventually in 1978 an appeals court upheld the sentence of the criminal court which had found him guilty of attempted murder. As a result Fenech was sentenced to 16 years imprisonment.

In 2010 he was condemned to a nine-month suspended jail term after he admitted having fired a firearm in a residential area and being in illegal possession of a firearm, in an incident dating back to 2003.

Fenech had claimed he was attacked by John Pace, 43, of Birkirkara. A charge of attempted murder had been dropped at the 11th hour.

Fenech’s turbulent life had even captured the imagination of author Paul Borg who in 1999 published the novel Ċikku Fenech – il-qtil, il-ħarba, il-bidwi which was largely based on his true story.