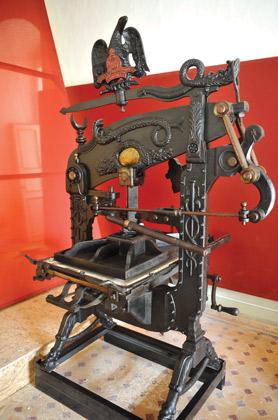 The earliest known Maltese poem and an 1864 printing press are two of the 100 objects that will be telling Malta’s story at the Archaeology Museum in Valletta.

Called the Great Story of a Small Island Nation through 100 Objects, the walkthrough exhibition about the islands’ history from their formation underwater to EU accession will be marking 10 years of Heritage Malta.

Held in collaboration with the Fondazzjoni Ċelebrazzjonijiet Nazzjonali, the Office of the Prime Minister and V-18 Foundation, the exhibition will also include four smaller displays celebrating the anniversaries of Freedom Day on March 31, EU Accession on May 1, Independence Day on September 21 and Republic Day on December 13.

The story of Malta, dating back to geological formation 35 million years ago, will be told on a specifically designed walkway with a display of objects on one side and an information timeline on the other.

With its slopes and dips, the 165-metre walkway imitates the highs and lows of history, while visual effects will build a marine ambience.

“Despite its tiny dimensions, the strategic position of Malta in the Mediterranean Sea attracted all those settlers and colonisers,” senior curator Sharon Sultana told this newspaper.

A seven-minute video at the beginning of the walkway will introduce the exhibition with an overview of the history of Malta, including footage from World War II.

The display will then be divided into 12 main periods, each with its own introductory video clip.

The objects all form part of the national collection, most of which are displayed at Heritage Malta museums.

They include the Kantilena from the Notarial Archives, an 1864 printing press manufactured when the press gained freedom of expression, a skull from www.mcc.com.mt the Hypogeum and Grand Master Jean de Valette’s suit of armour.

Some of the artefacts will be on display to the public for the first time.

At the end of the trail, which finishes with the temporary anniversaries’ exhibition, an audiovisual exhibition will take visitors through 10 years of Heritage Malta.

Two publications have been issued to commemorate this exhibition: a catalogue by Godwin Vella and a children’s book, which reads like a diary penned by Malta itself, by Vanessa Ciantar, which is illustrated by Martin Spiteri.

The exhibition will open in the second half of March and will go on till the beginning of next year.

Visitors will not have to pay an extra charge to see the exhibition, apart from the admission charge.

On the anniversaries of all four public holidays, admission to the museum will be free.