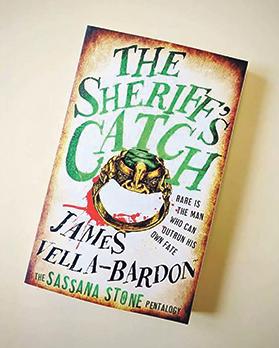 Maltese author James Vella-Bardon has made international headlines after the trailer of his debut novel The Sheriff’s Catch was nominated in the category of Best Trailer for Book or Novel at the Golden Trailer Awards.

Since its inception in 1999, the US awards ceremony has emerged as one of the most recognised events worldwide devoted to the artistry of trailers, commercials and posters.

Mr Vella-Bardon said: “It’s the underdog story of the millennium. We pulled this novel trailer together on the smell of an oily rag, when compared to budgets afforded by giants like the Harper Collins of this world.”

He produced the trailer with his father Frank and composed the score with the assistance of a former colleague, Australian lawyer Michael Mavromatis.

The trailer was directed by Mr Vella-Bardon and edited and graphically enhanced by Nepalese film director Sabin Gnawali.

It’s the underdog story of the millennium

Mr Vella Bardon continued: “We were already dumbstruck when our application was accepted for GTA19, so if we go on to win I’ll pass out. But seriously, let’s see if we can go on to nick this award!”

GTA 19 will take place on May 31 at the Theatre at the Ace Hotel in Los Angeles and will be hosted by comedienne and actress Michelle Buteau.

The nominations were announced earlier this month, with Netflix and Warner Bros leading this year’s tally by studio, with 62 nominees each.

Netflix was represented by its work on films and series including Stranger Things season 2, The Crown and Icarus.

Warner Brothers led its GTA tally with work on films and series including Wonder Woman, Dunkirk, It, Ocean’s 8 and Westworld season 2.

Rounding out the top three leading studios for 2018 was 21st Century Fox.

The trailer for The Sheriff’s Catch can be viewed on YouTube or www.jamesvellabardon.com. The novel is available for sale from all Maltese bookstores.