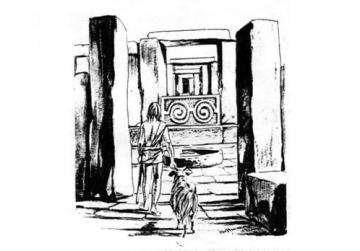 The prehistoric temples of Malta and Gozo have been described as “architecture in its purest and most original form”.

They are sometimes called megalithic, meaning “of large stones”. But the temples are much more than that: they are the remains of ancient monuments that are older than the pyramids of Egypt.

The first use in all history of a very special way of building happened in Malta and Gozo without the use of any metal tools or wheels. It was real living people who made and used the temples. They were so advanced for their time that some scientists believe they were the earliest civilisation in the whole Mediterranean area.

Scientists have conducted special tests that show that Ġgantija in Gozo is nearly 6,000 years old. The earliest temples were started at around 3,800 to 3,600 years before Christ.

The pyramids in Egypt, King Solomon’s Temple in Jerusalem, Stonehenge in England, the Acropolis in Greece, the Colosseum of Rome – in short, every famous building you can think of – were all built much later than the Maltese temples.

There are 23 known places in Malta and Gozo that once had megalithic buildings. It is suspected there are more temple sites which have not been clearly identified, usually because more modern buildings have been erected over their ruins.

Some of the known sites today consist of only a few stones and have not been excavated. Others are rough outlines, maybe there are remains of a doorway, broken walls and paving stones. Yet four separate complexes are surprisingly well preserved, as is an underground burial complex which probably also had ritual functions.

The materials found inside the temples make it clear to archaeologists that the temples were meant to be spiritual centres. The figurines, sculptures and pottery are clearly for ritual, not for everyday use. The monumental effort of just building the structures shows a powerful dedication.

From the archaeological trail of pottery remains, it is thought that the temple-builders came by way of Sicily. The ancient mariners must have had some sort of navigation 7,000 years ago. When they first came to these islands they already had the skills to build seaworthy rafts or boats large enough to carry their livestock: goats, sheep, pigs, cattle, as well as their families, tools and household goods.

The Maltese islands’ 25 prehistoric temples are oriented predominantly to the southeast in the direction of the rising sun at the winter solstice.

Some orientations which point to the winter solstice sunset have been established. Prehistoric people in Malta were interested in astronomy.

The illumination by the sun of the side and main altars on the winter solstice proves the ability and desire of the Neolithic master builders to immortalise their religious ideas in architectural form.

The temples are dedicated to a tectonic cult, which arose from a death cult, even though one can say with certainty that these sanctuaries were not used for burials.

Prehistoric man saw in earth Mother Nature. It was Mother Earth who was sustaining him through his wife, giving life to his children.

Hence everywhere one finds the pair of opposites of light and dark: while the earth is seen as the mother, the sky or the sun in the sky represents the father.

Studies by scientists have proved that most of the temples have no astronomical alignment, except the Mnajdra complex where they acknowledged a definite astronomical alignment because it faces east, opposite sunrise, at the equinox. It also receives beams of rays at sunrise in summer and winter.

All high religions have placed the dual relationship between the sky and the earth at the centre of conception. Earth, frequently understood as maternal, was seen as an opposite to the paternal strength of the sun and the sky.

The supreme divine strength is represented by the sun. The sun god Aton (Re) is the ruling god in the religion of Ancient Egypt, and his heir as supreme god in heaven includes the god of the Jews and Christians, to mention but one example.

The illumination by the sun at the side and main altars on the winter solstice proves the desire and ability of the Neolithic master builders to immortalise their religious ideas in architectural form.

We do not know what ritual practices and ceremonies took place in the secret chambers of thetemples. They were thanksgiving places and centres for food distribution, healthcare, education and worship.

The temples were only life centres. When the temple people died, burials surely had ritual attached to them, but were held in different places – usually in communal underground cemeteries like the hypogeum.

To conclude, Malta’s temples are a magnificent testimony to the Neolithic temple culture. Their architectonic alignment to sunrises and sunsets reflects religious archetypes. Archaeologists in their observations sound rather sceptical when they are confronted with the theory of a conscious orientation of the temples.

The last prehistoric period was marked by the building of fortified villages, which may have been a sign of the insecurity of the islands.

The Borġ in-Nadur site, dominating the bay of Marsaxlokk a few hundred metres from Għar Dalam, still retains some of the imposing protecting walls. The stones are far from being the huge blocks used for the building of the temples, and practically none of the latter appear to have been built during the epoch.

• An exhibition of all the megalithic temples in Malta and Gozo is being held at the Mġarr local council as from today. Viewing times: Monday to Friday between 10am and noon. Entrance is free. Mr Azzopardi will deliver talks to groups, including cultural societies, schools and tourists, interested in learning more on the subject. Reservations can be made on 2152 0011 or by sending an e-mail to mgarr.lc@gov.mt.