A huge underwater canyon, with an area equivalent to eight times that of the Maltese islands, has been discovered by a Maltese marine geologist.

It is one of more than 500 submarine canyons that have been discovered and mapped by an international team of scientists, led by university researcher Aaron Micallef in a five-day Cumecs-2 expedition.

Cumecs is an EU-funded research expedition that explores Mediterranean geology.

“This is such a new, exciting feature – we were hoping to find something like this but it was still amazing when we found it,” Dr Micallef said.

The massive canyon is in an area known as the Malta Escarpment, which is a 250km-long underwater cliff that extends southwards from the eastern coast of Sicily towards the eastern coast of the Maltese islands and beyond. The cliff reaches a height of 3.5km in certain places, which is higher than Mount Etna, making it one of the largest features on the ocean floor.

Dr Micallef and Tim Le Bas, from Southampton’s National Oceanography Centre, explained they suspected the large canyon was created by undercutting of the rock.

“There are many individual canyons and some have been active recently – even through landslides, meaning there is still activity going on down there,” Dr Le Bas said.

Another unique feature about the escarpment is the lack of rivers in both Malta and Sicily.

“The canyons were not cut by any large rivers, which can be quite an important feature.”

Dr Micallef held up a grey rock, the size of a large egg.

“This stone came from the large underwater canyon, which means that it is still active. Its size indicates it was recent because these quickly disintegrate under the intense pressure.”

Even though the Mediterranean makes up just one per cent of the world’s seas, both Dr Micallef and Dr Le Bas pointed out that it was extremely diverse.

“We know very little about it,” Dr Micallef admitted.

Through modern deep water acoustic technologies on board the OGS Explora, the scientists were able to investigate the seafloor at depths down to four kilometres and generate a detailed map of the entire Malta Escarpment.

“It is one of the largest features on our ocean floor and one of the least explored,” Dr Micallef said.

Dr Le Bas said submarine canyons were rich in biological communities and acted as conduits for nutrients and pollutants.

Deep core geological samples of the ocean floor were also taken and these hold important information on past earthquake activity and climatic changes.

This will allow the scientists to understand the nature of the cliff and how it was formed. This is important research because the Malta Escarpment hosts natural hazards such as under­water landslides. 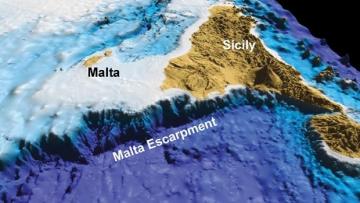 A 3D image of the Malta Escarpment.

The next step would to analyse these samples in a laboratory and compare the Malta Escarpment with underwater cliffs mapped elsewhere around the world.

Dr Le Bas pointed out that similar formations had been recorded next to Florida, adding that this information might be interesting to foreign researchers.

“What we would really love to do is actually take photos of the canyons but that is hugely expensive,” he said.