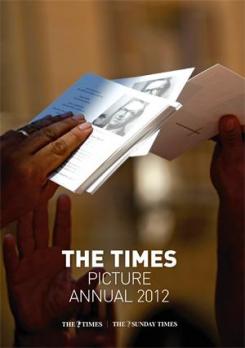 One must admit that looking back at 2012 is an interesting experience. And there is no better way of doing it than by poring over the collection of photographs in The Times Picture Annual 2012, featuring works by Darrin Zammit Lupi, Christian Sant Fournier, Jason Borg and Matthew Mirabelli, plus a selection of freelance photographers and top international ones.

For several years, in fact since the very first annual, it has fallen upon me to have the honour to review this fast trip down memory lane just before the year itself finishes and a new one begins.

With what high hopes do we approach New Year’s Eve and New Year’s Day? And yet, like the Mayan calendar, they are mere man-made calculations, which in the context of the great cosmic universe mean absolutely nothing. Time as we calculate it flows on, while the world spins on and the planets revolve around a solar system which is but one tiny fragment of an incalculable infinity.

Concentrate the year as we know it on tiny Malta and the fragment becomes invisibly microscopic. Paradoxically, we see ourselves as the epicentre of the world, the navel of the Mediterranean, the cat’s whiskers and the bee’s knees to boot!

I cannot say I can really blame anyone for this. Our very insularity has created a unique world within a world; a community of people who either know or are related to everyone else and who in times of need shed their ancient prejudices and alignments to tow the same rope as they are doing right now, as I write in front of television on a quiet Boxing Day afternoon watching the L-Istrina donation figures mount up; a tribute to Maltese generosity and altruism.

And yet there is a downside to all this; a downside which is epitomised by two photographs that appeared in two consecutive issues of The Times and which outraged Malta to an unprecedented degree. The first, taken by Darrin Zammit Lupi, showed a quartet of violent campers at Marsaxlokk assaulting resident Christopher Haber, one of the Marsaxlokk residents who was peacefully protesting about the campers’ ghetto and its environmental impact on his home town.

The photograph that appeared next day showed the same campers sitting on the steps of the Law Courts in the same beach clothes they had been wearing the day before, grinning from ear to ear.

One of them, Anthony Cini, pulled his tongue out at the photographer, Chris Sant Fournier. And no wonder, after behaving like wild hooligans and terrorising an entire neighbourhood, all the court could come up with was a €60 fine! Christopher Haber was so terrified for his own safety that he ‘forgave’ the miscreants.

The reaction to these photographs was of total outrage; of anger that the state has not provided the means by which the rights of ordinary citizens may be protected and safeguarded, and dismay that once again the statue of blind Justice has been, for umpteenth time, spat upon and reviled. If ever there was a wake-up call for the justice system to reform, this was it.

Needless to say, it was ignored. Malta is in danger of falling into the law of the jungle because the institutions set up for the very purpose of preventing this mayhem are not functioning or delivering.

The magic of pictures and the volumes they convey is always the raison d’être to a book like this. The passing of Dom Mintoff was a case in point.

Saint to some and devil incarnate to others, the maverick Prime Minister who ruled Malta with a rod of iron between 1971 and 1984, left his mark, whether we like it or not, upon our psyche in more ways that we care to know.

It was Mintoff who established the welfare state we know today by toppling and destroying anyone who opposed him, even the most well-meaning. Whether it was the Nationalist Party, the Church, the British, the Law Courts or the establishment, all were awestruck at the sheer audaciousness of the man, and when it came to Helsinki, his stubborn tenacity. Min­toff, even after death, will remain an enigma.

The photos taken at his state funeral are telling indeed; an extreme case of de mortibus non nisi malum. Despite the fact that in 1998 he brought his own Malta Labour Party to its knees by forcing Alfred Sant to call an early election and being roundly reviled for it, by the time of his death 12 years later, it seemed as if the entire affair had been forgiven and forgotten. The emotion was powerful, and the few, very few, who wrote what they thought was the truth about the man were in danger of being lynched.

Politics has always played a leading role in our daily lives and this year we have seen a beleaguered government struggling to maintain the last shreds of dignity while its own backbenchers systematically destroyed it. Caught on camera are the various protagonists of this Greek tragedy.

There is Richard Cachia Caruana, who looks like Louis XVI in front of the Committee of Public Safety; Austin Gatt, surrounded by his henchmen, wearing his usual belligerent devil-may-care look just after he was practically toppled; poor Carmelo Mifsud Bonnici looks like the perfect victim of a palace plot launched by the wannabe Lafayette; Franco Debono aided and abetted by tea-addict Jeffrey Pullicino Orlando; and, of course, vacillating Jesmond Mugliett.

Through it all, a thread of Lawrence Gonzi photographs weaves through the book epitomised with the perpetual Gonzi smile that indicates business as usual while the people gape in disbelief and the Opposition retain their gallery seats in the arena waiting, with itchy feet, their turn to meet the gladiators.

There are some visual beauties too; the sea of cardinal red around Prospero Grech who in February became the second Maltese national in history to be raised to the rank of Prince of the Church.

The shot of Manhattan under a black sky just before Hurricane Sandy hit it can only be transatlantcally described as ‘awesome’, while the royal barge on the Thames regatta last June brought back personal memories of the Diamond Jubilee as three generations of royal ladies are caught on camera, with Prince Philip soldiering it out for hours in the most revolting weather.

Yes, memories are made of this...