Sculpture was historically the least favoured artistic medium for female artists to choose to work with (although there were some exceptions). Working with heavy materials, needing assistants, acquiring the pricey medium, and the like, were some of the deterrents. Some women did defy what was expected of them, and in more modern times several female sculptors emerged, such as Louise Bourgeois, to name one obvious example.

Danish-born Marie Louise Kold has made a name for herself internationally, but especially in Scandinavia, by creating art pieces with copper, bronze and brass, in which she imbues the metals with an emotional charge that turns them into art.

Her works are to be found in private collections all over the world. Her art has been extensively exhibited in the US, Paris, Denmark, Greece and Malta, to name a few. She now lives and works between Sweden and Malta.

Working with metal requires an intimate knowledge of chemistry and substances, and one must try not to be clumsy in the studio. Kold confesses to still managing to injure herself despite having been a full-time metal artist since 2001.

Due to the heavy medium and unpracticality of it, she was often dissuaded from pursuing her chosen path, but this has made her success that much more satisfying.

Kold is not just a sculptor. She also works with metal as a support for paintings. But she does not simply paint on these metals – bronze, copper and brass.

Due to the heavy medium and unpracticality of it,she was often dissuaded from pursuing her chosen path

Kold only applies small sections of painted forms on her works. In this exhibition the only painted sections are nude female figures executed in oil with a tiny brush. Her delicacy in the paint application of the almost miniature figure contrasts beautifully with the background. This reveals her ability as a painter in the midst of all these sculptures. 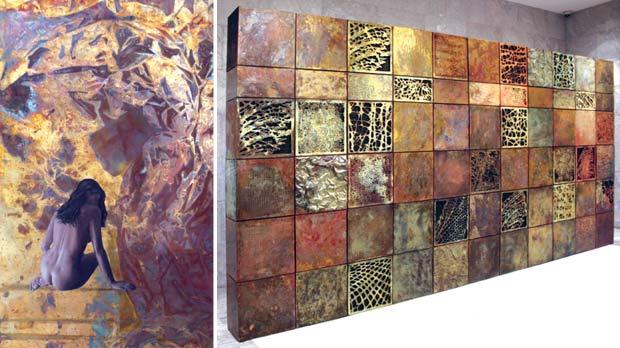 She has worked with metal since the mid-1990s when she went to art school in Sweden, where she studied etching among the many techniques she was instructed in. In fact, her technique has its roots in the tradition of copper printing.

She found herself immediately fascinated by the medium, but had to move onto something else at art school. Until a few months later, when she rediscovered one of her own copper pieces that she had previously used for printing in the school workshop. What she realised was that within these few months, the colour on the copper plate changed, with her own fingerprints becoming ever more evident.

She then decided to purposely change the colour and texture of metals, which is very time-consuming. Moreover, unlike with working with copper for prints, from which several prints can be produced from one plate, the pieces Kold produces are one-offs, and therefore less profitable for the artist.

Kold’s metals are indeed engraved and etched, but they are not used to print with – it is the metal itself that becomes the actual art object. She changes the visual quality of the metal to achieve romantic and fantastical, often abstract, forms.

The medium is brought to life by patination with acids that alters itself due to factors such as light, touch and time. One must imagine this charming and soft-spoken woman working with these media, and creating huge pieces such as the 2009 Rich in Knowledge about Wings, a title derived from The Diver, a short story by Karen Blixen.

This is an etched and patinated copper and brass installation commissioned by the Danish philanthropic association Realdania, that is 5.5. x 2.8 metres large. The installation, on which she worked with an architect and sound technician for sound proofing, is really a massive wall that is made up of squares with warm natural hues that have been differently treated, with texts from the short story etched in them.

Squares are the chosen shape for many of Kold’s wall hung pieces. Danish texts also appear in some individual pieces.

The Malta exhibition, Lines of Flight, is being curated by Ġorġ Mallia, and will consist of largely smaller scale works, with the inclusion of some massive pieces produced in the last decade.

In fact, one of these large works is a portrait of Hans Christian Anderson that consists of 2,809 tiny individually patinated square sheets of bronze, carefully selected from over 5,000 sheets.

The result is a portrait that seems to be pixellated when viewed up close. The required shades were achieved by darkening the sheets by exposing them to rain water for different periods, raining from a week to two months, and which were sometimes manipulated by adding sulphur and heat.

By studying archaeology after completing her artistic training in 1998, Kold examined metallurgy and how metals change and evolve in the years they have been in use. The colour that is to be seen in Kold’s metal pieces is never applied with paint, but it is purposely achieved by chemicals applied to the copper, bronze and brass, which varies according to the medium. From ochres to greens, from pinks to browns, and blues to golden hues.

Kold also sometimes uses different metals within the same piece to create a variety of colour and texture. And copper is exploited for its malleability to create three dimensional compositions.

Kold also revealed that her pieces are sometimes the result of surprises which the metal provides. This helps her to learn more about the processes used, and allows her to get more emotionally drawn to her work.

Kold loves her work so much that she even produced a series of metal pendants – portable art, as she calls them – that she can wear, and which can also be an integral part of her sculptures when not being worn. This exhibition is a first for the artist in Malta, and also a first for the local contemporary art scene.

Lines of Flight is on from Saturday until May 25 at the Upper Galleries of St James Cavalier, Valletta.