Joseph Bonanno was born on June 18, 1882, and nurtured in Senglea, a city which, since its foundation in 1554, had given birth to personalities who had made a name for themselves and enriched the prestige of their birthplace. He was baptised two days later by Canon Paul Ferris, at the Senglea collegiate, and was diligently brought up by his parents Joseph and Carmen née Demajo in a wealthy family that fostered firm Christian values.

Bonanno grew up with a decisive foresight and manifested an early desire to answer to God’s invitation and embrace the priestly vocation. No one within his family or among his relatives had inherited titles of nobility; nonetheless, nobleness was ingrained in his generous heart.

He began his studies at St Ignatius College, St Julian’s, and continued his priestly course at St Thomas Aquinas University, Rabat. During his studies, he was much esteemed and acclaimed by both Jesuits and Dominicans.

On January 19, 1904, while still a sub-deacon, he was elected canon of the Senglea collegiate chapter. In the meantime, Canon Archpriest Francesco Briffa chose him as director of the Institute of Catholic Education, founded in Senglea in 1886 for the formation of adolescent boys. From this institute emerged many priestly vocations, an irrefutable testimony to the valuable work carried out by this energetic cleric.

Senglea-born bishop, Mgr Salvatore Gaffiero, ordained Bonanno a deacon on December 17, 1904, and a priest on December 23, 1905, at the Senglea collegiate church. On Christmas Day, 1905, he celebrated his first solemn mass in Senglea. 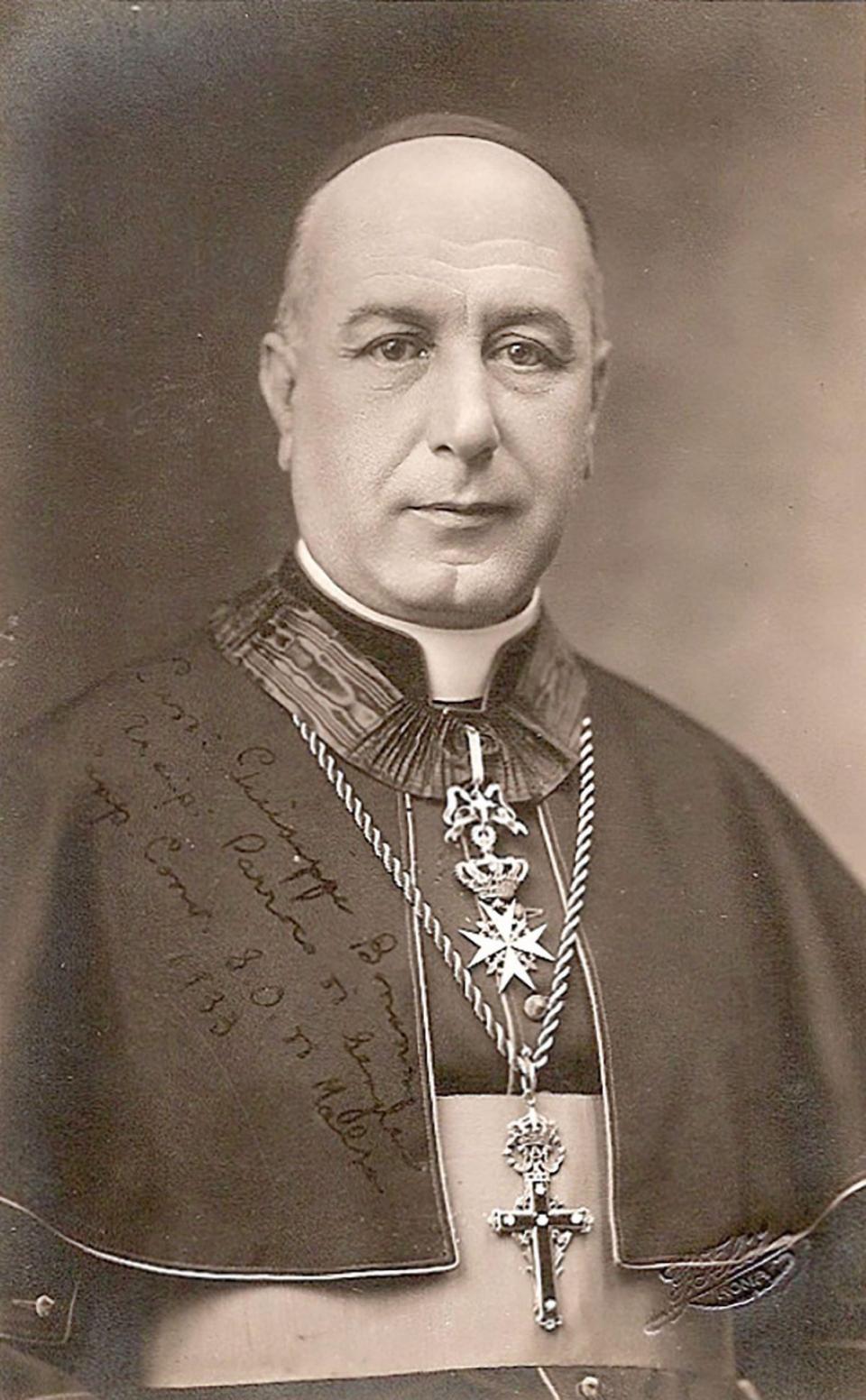 As a priest, Can. Joseph Bonanno was appointed procurator of St Joseph Conservatory, Cospicua. He later became chaplain and counsellor at several monasteries for nuns and consecrated virgins. He also became director of the Figlie di Maria in Senglea and subsequently procurator of the Senglea collegiate. Despite the fact that he was busily engaged in all these responsibilities, he never neglected the youths of the city.

In 1912, he worked in collaboration with Fr Joseph Darmanin, a priest recognised for his wisdom and acumen, in the organisation of the Domus Pius X, which developed into a Catholic Action Centre for young men, named after St Aloysius Gonzaga. This organisation held conferences and speeches that helped form true Christian consciences essential for those who wished to bear witness to Christ in the secular sphere of life. 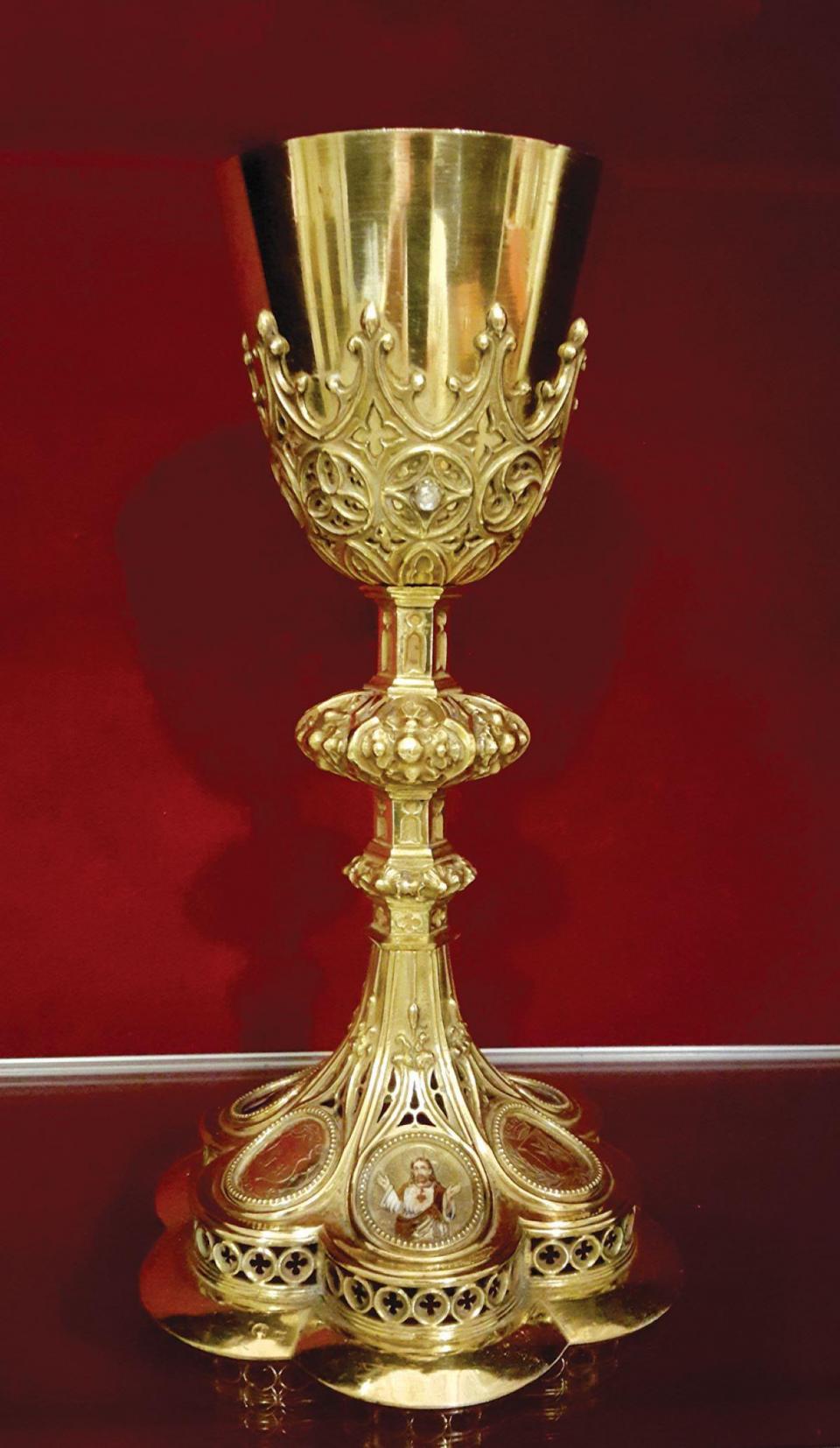 Bonanno’s chalice, which he later donated to Senglea collegiate church.

In 1917, at a time when Fr Angelo Raggio, the provost of the Oratorians in St Philip’s convent, Senglea, was very ill, Canon Bonanno was appointed coadjutor provost. For 10 years, he did his utmost to contribute towards the spiritual and material needs of those who lived in the environs of the convent and the church of Our Lady of Porto Salvo, Senglea.

When, on April 25, 1920, the Holy See issued the decree by which Senglea’s titular statue of Maria Bambina was to be solemnly crowned, Bonanno was chosen to form part of the organising committee that was promptly established to plan and execute the related festivities. The coronation of the statue of the Virgin Mary was subsequently held on September 4, 1921.

On January 7, 1927, Canon Joseph Adami, archpriest of Senglea, was nominated as a member of the Cathedral Chapter of Mdina. Shortly afterwards, on January 19, 1927, Bonanno was appointed to the role of vicar-curate of the Senglea parish. Since then, the parish came under his care and attention. After receiving the apostolic letters on behalf of Pope Pius XI, Canon Joseph Bonanno was granted the guardianship of the parish.

Archbishop Dom Mauro Caruana, OSB, appointed him archpriest, and on June 17, 1927, Bonanno took the solemn oath at the Curia. On June 21, 1927, Vicar General Mgr Luigi Camilleri gave him possession of the parish. The delight then manifested by the parishioners showed their conviction that they were attaining a true ‘shepherd’. This certitude was fully realised during the 12 years during which Archpriest Bonanno worked tirelessly for the good of the ‘flock’ entrusted to him. 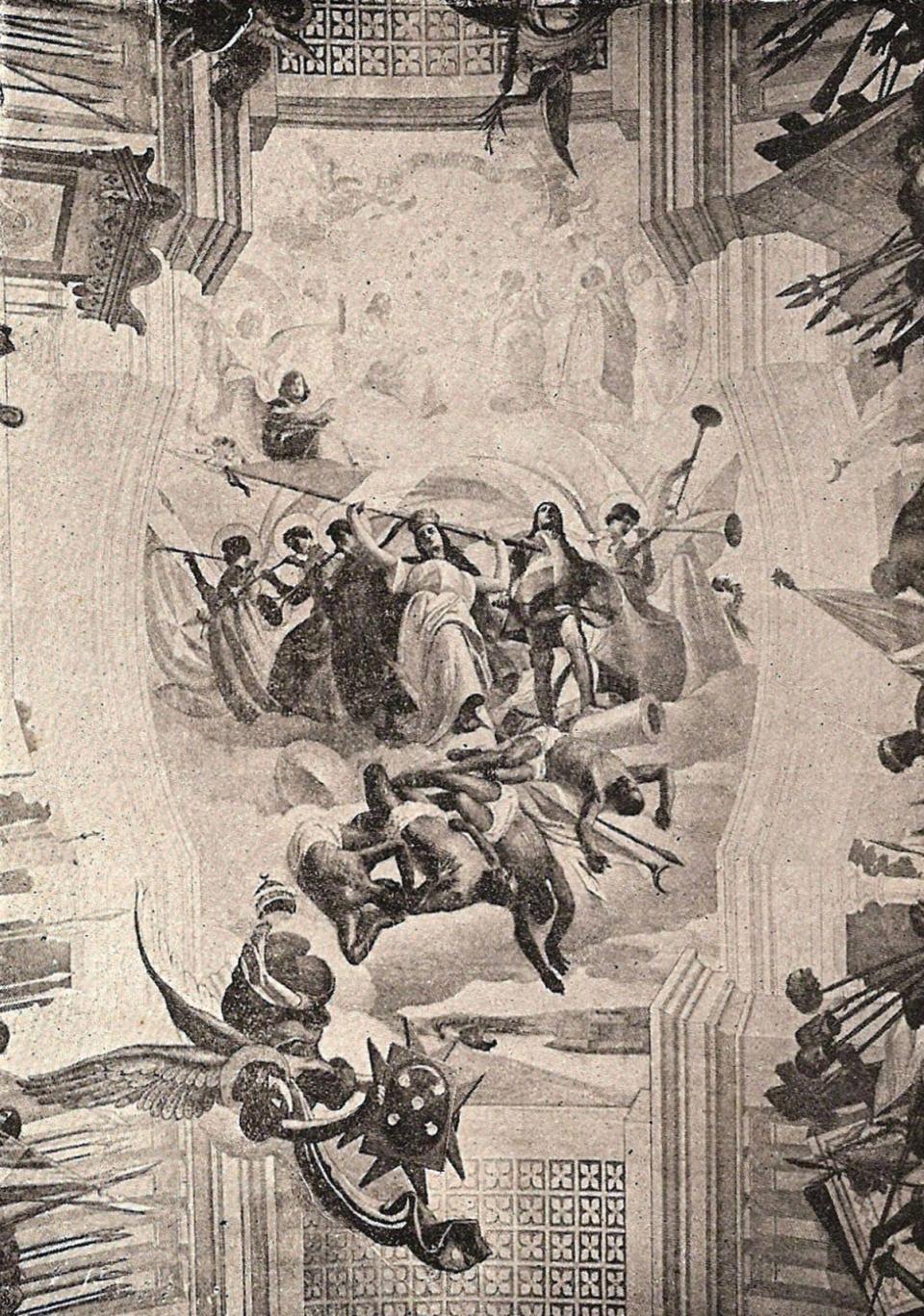 The central panel of the painting of the choir vault by Prof. Joseph Briffa. 1934.

As archpriest of Senglea, Bonanno was the true model of a Christian leader. Without putting aside any of his pastoral duties, he worked hard to adorn the temple of Maria Bambina. Among the works he accomplished, suffice it to mention the painting of the choir vault, with scenes showing the victory of the Maltese and the Knights during the Great Siege of 1565, painted by Prof. Joseph Briffa in 1934. The rebuilding of the dome, complete with its decoration and painting by the same artist in 1937, was another gargantuan undertaking.

Previously, Bonanno had decided to do away with the old organ and replace it with another one manufactured by Laudani e Giudici, which he himself funded. Unfortunately, this organ, which was set in place by November 2, 1930, was destroyed during World War II air raid bombardments over the nearby dockyard. Alas, Briffa’s paintings also met the same fate when the Senglea basilica was almost totally destroyed.

Archpriest Bonanno strived to help the poor and the needy. A benefactor for many institutes and poor families, he had a special interest in the welfare of mothers. He believed that the prosperity of each and every family rested on the respective mothers. He founded the Association of Christian Mothers in Senglea, with the aim of offering mothers sound help and advice so as to properly carry out their duties.

The insignia worn by Bonanno as conventual chaplain of the Order of St John of Jerusalem.

During his time as archpriest, religious and social activity in the parish flourished. The Xirka tal-Isem Imqaddes ta’ Alla, founded in Malta in 1928 by Fr Gerard Paris, OP, established itself in Senglea on January 11, 1931. In June 1931, the first parish eucharistic congress was celebrated in Senglea. In 1935, encouraged by Canon John Theuma and Fr Michael Azzopardi, Bonanno agreed to set up the first parish pastoral council in Senglea.

The Catholic Action, which was very active in Senglea since its inception, is intertwined and closely knit with the Bonanno family. Bonanno treasured the Catholic Action, helped expand it, was its apostle and, along with his family, was its great benefactor.

When The National Theatre, in Victory Street, Senglea, was emptied, and rumours surfaced that it was for sale, together with an adjacent house, Bonanno and his brother Charles decided to buy both the theatre and the house for use by the Catholic Action.

The Sede di Azione Cattolica founded in Senglea, is undoubtedly a monument to Bonanno’s affection towards the Catholic Action and, as appropriate, a marble slab at the entrance to this locality today commemorates the generosity of the Bonanno family.

In 1936, Canon Vincent Camilleri asked Bonanno to start taking care of the altar boys. The archpriest heartily accepted and, thanks to this initiative, these boys and youngsters began to learn Gregorian chant and liturgical ceremonies. This was the beginning of an organised piccolo clero at the parish.

In August 1937, Bonanno was endowed with the title of prelato d’onore and, therefore, began to be called monsignor. Towards the last days of Bonanno as archpriest, the dark clouds of war began gathering on the Maltese horizon. All Malta was to be affected but Senglea had to suffer much more than other localities. 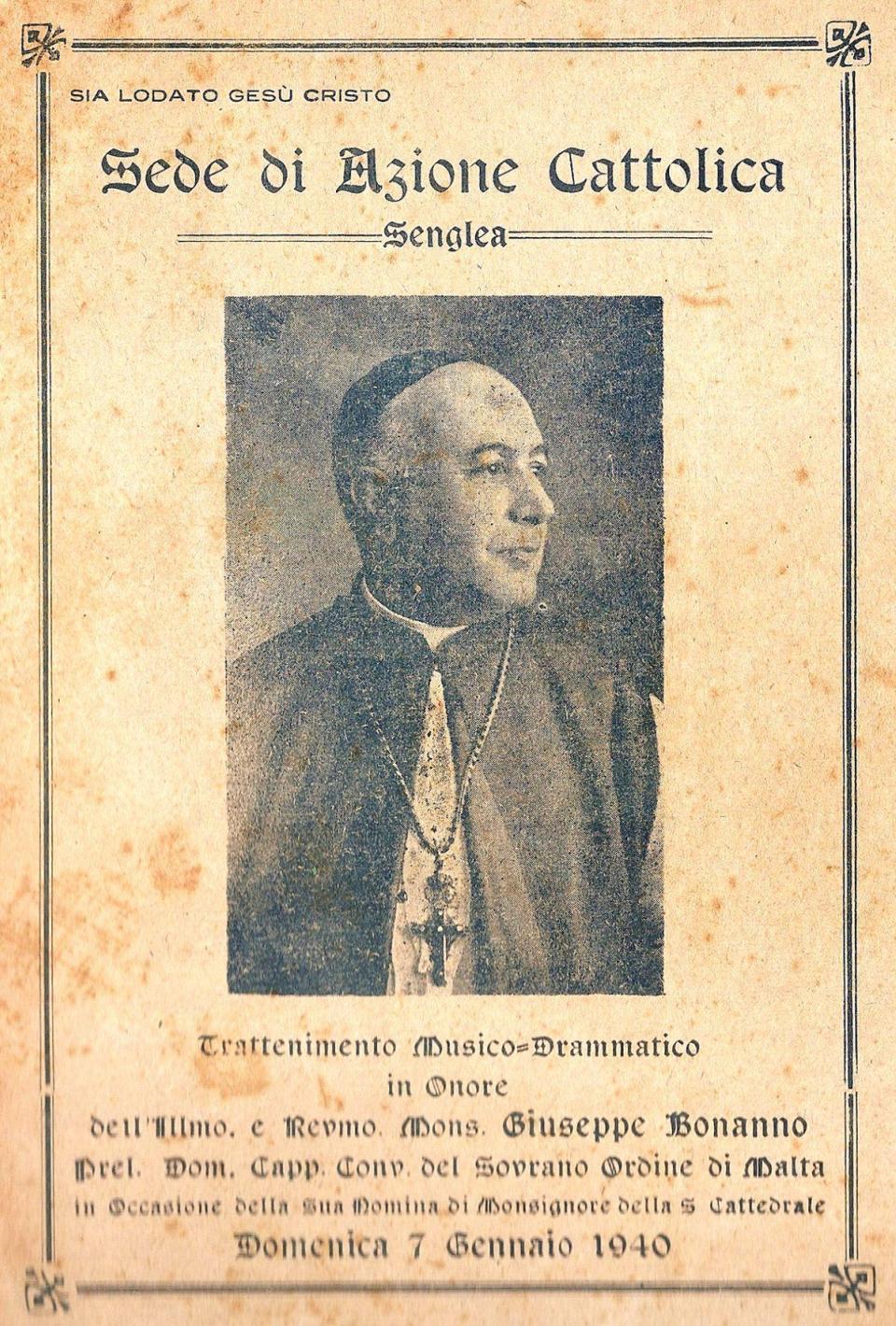 Front cover of the printed programme for the musical evening held on January 7, 1940, by the Senglea Catholic Action in honour of Bonanno.

Tired and unwell, he began to feel the burden entailed by the leadership of the parish. On December 20, 1939, when the war was still in its initial phases, Archbishop Caruana issued the nomination of Archpriest Bonanno as Monsignor of the Cathedral of Malta, where he was installed on January 4, 1940. Nonetheless, Mgr Bonanno did not dismiss his sense of duty. Indeed, the archbishop made him depositary of the Pie Amministrazioni of the diocese and the government appointed him a member of the Committee for the Aid of the Poor.

Such a generous and benevolent priest could not but be respected and praised by all. This admiration and appreciation were clearly attested to by the festivities held for his priestly jubilee in 1930, and when he was elected member of the Metropolitan Chapter. Furthermore, the grand master appointed him conventual chaplain of the Order of St John of Jerusalem. 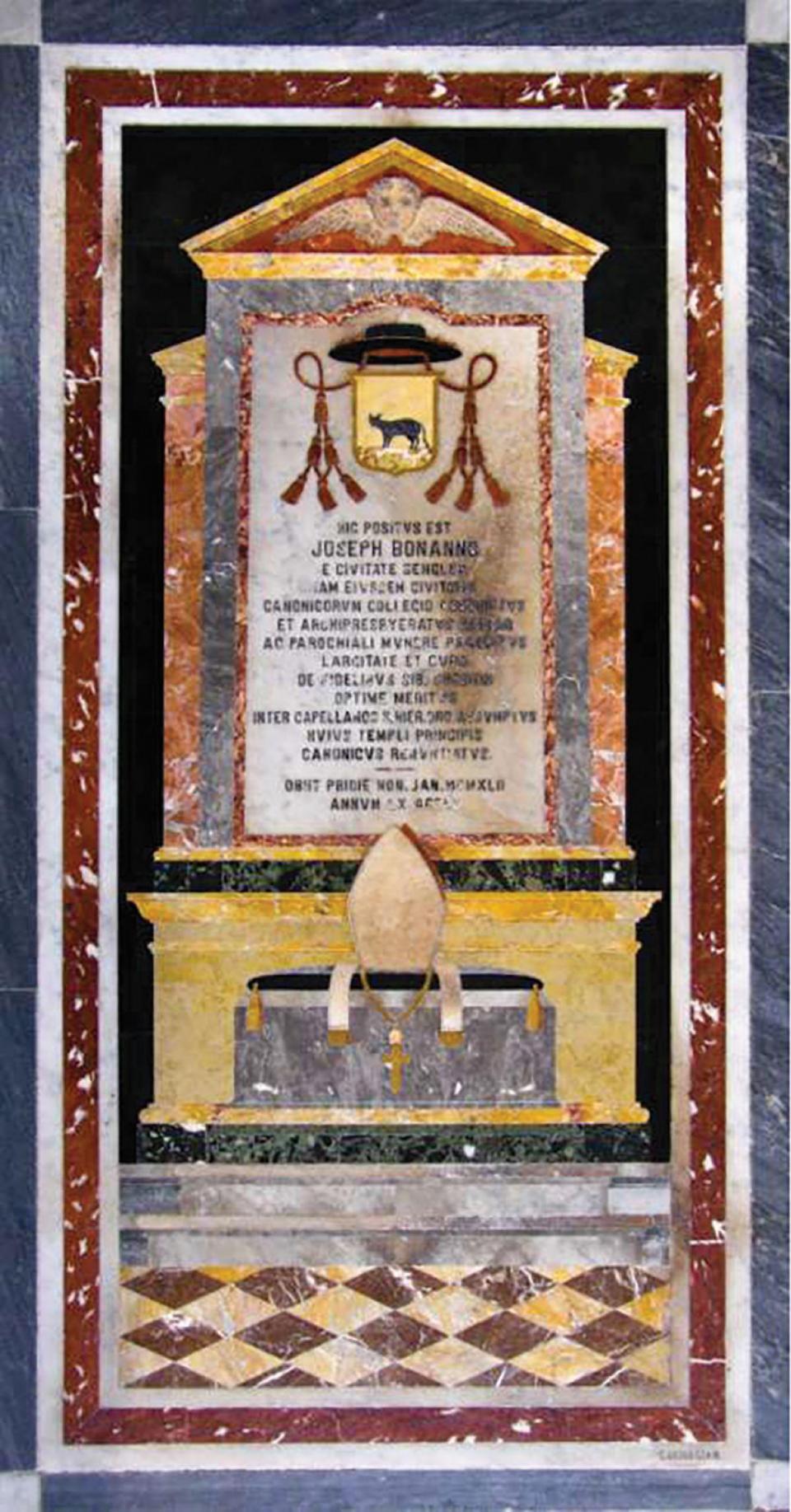 The marble slab and epitaph covering Bonanno’s resting place at the Mdina cathedral.

After a short illness, Mgr Joseph Bonanno submitted to the will of God, and rested in the peace of the Lord on January 4, 1942, at 2, Piazza Porta dei Greci, Mdina, aged 59. He was buried in the crypt at the Mdina cathedral. An epitaph in Latin, which we can still see today on the left to the entrance of the sacristy at the cathedral, reminds us of this prelate of high stature.

Mgr Bonanno’s life was one that interlaced zeal for the glory of God with heartiness for the good of souls. The amiable, respectable, pleasurable, honourable figure of this priest, who directed the Senglea parish for 12 years with fatherly affection and the wisdom of an erudite leader, never fades.

It is more than fitting to recall the life of this zealous priest, a sponsor for the poor and an aide for the sick, on this 80th year since his passing, and like a living sign of the Good Samaritan, he truly emblemised Christ’s mercy for us all.