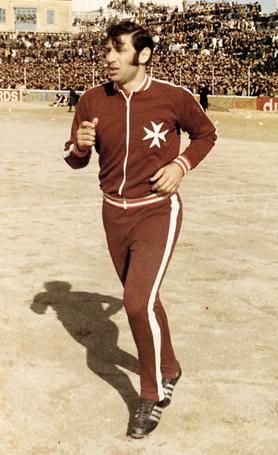 Leli Micallef before the 1971 Malta vs England encounter at the old Gzira stadium.

Tall and well-built, Leli Micallef was one of the best central defenders of his era.

He started his career as a striker before he was successfully converted into a defender. Born in Birkirkara on August 21, 1945, Micallef kicked his first ball at the local Primary School.

It was not long, however, before he was noticed by Birkirkara FC and at the tender age of 15 he was already playing for the minors team.

In his first season with the senior squad, he helped Birkirkara win the Second Division league and cup double.

The next year he made his First Division debut for the Stripes on October 14, 1961 against Valletta. Birkir-kara lost that match 3-1 but Micallef’s obvious talent was there for everyone to see.

His stay with Birkirkara did not last long because at the end of the season he was approached by Sliema Wanderers and offered a contract.

It was an opportunity he could not turn down and to the dismay of the Stripes’ supporters he signed on the dotted line for the Blues.

With Sliema, Micallef was an instant success. He made his debut for the Blues on September 29, 1962 in the 1-0 victory over Hibernians and from then on he never looked back.

This was the start of a long and successful career with the Wanderers which lasted 16 seasons. During this period he won no fewer than 22 major honours which make him one of the most honoured footballers in the history of Maltese football.

One must also mention the fact that Micallef played 22 matches in European competitions and he was capped seven times by the national team in full internationals.

He made his international debut for Malta on October 11, 1970 in the 1-1 draw against Greece in the European Championship.

Adding to the number of prestigious friendly matches, Micallef also played against some of the best European clubs both in Malta and abroad, making him one of the most important Maltese footballers of the Sixties and Seventies.

When Micallef finally hung up his boots he took up coaching.

In 1978, he obtained his B Licence and not long later the A Licence in Scotland where the renowned Andy Roxburgh was chief instructor.

He started coaching with Sliema minors and after a season with Marsa FC he joined the National Technical Centre as assistant coach to Gencho Dobrev and later Horse Heese.

During the eight years he spent with the national squad, Micallef was in charge of the Under 18 and Under 21 teams.

He also worked with the Mosta, Luxol and Zabbar nurseries.

Micallef is still active as a member of the Coaching Licence Committee within the Malta FA.