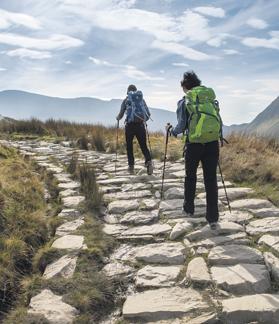 Doing the trek on foot can take up to six hours, depending on the route chosen. Photo: Gyvafoto/Shutterstock.com

Whenever we look up at a mountain, one of the first questions we usually ask ourselves is, “I wonder what it all looks like from up there?’ Yr Wyddfa, or Snowdon, is no exception. Its summit offers, without a doubt, the grandest view in Wales – not a surprise, since at 1.085metres high, it is the highest mountain not only in all of Wales, but also England. And this is why I absolutely had to visit, of course.

I must admit – I am not a very sports-minded person. I don’t like walking much and I have never tried mountain-climbing, which is why I have frequently thought that reaching the summit of a mountain for me would be practically impossible. Fortunately, however, I was totally wrong, at least with regards to Snowdon.

This is because the summit of Snowdon, also known as the Roof of Wales, can be reached not only on foot, but also by railway. Be warned however, tickets are on a first-come, first-served basis, as opposed to by demand. And the demand often exceeds the scheduled time table. Which means that the best thing to do if you want to journey up the mountain by train, is to visit the official website www.snowdonrailway.co.uk/ and book your seats beforehand, rather than trying your luck at the ticket booth.

My journey to Snowdon was a memorable one. I had done my homework so I knew that the railway is usually closed between October and March, since the mountain can be quite dangerous during the winter time. I picked the month of September and proceeded to check out the ubiquitous You Tube videos available by those who had ventured there before me. Even from the videos, I could already see that train carriages were not large and that capacity was very limited. Online pre-booking suddenly made a lot more sense. 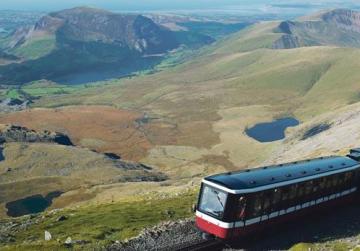 Taking the railway is the easiest way to reach the top of Snowdon.

Upon arrival, we parked our rented car at the Pen-y-Pass car park, which is directly in front of the restaurant, gift shop and ticket booth found at the foot of the mountain. There was a very nice parking attendant who refused to let us pay before we had checked whether the train was actually working on that day or not, since there was a bit of a high wind and trains usually do not make the journey during bad weather. His attitude made a refreshing change from what we are used to locally. Happily, everything was fine, so our hope of reaching the summit on that day were fulfilled. Incidentally, full refunds are always given in case of non-operation due to bad weather.

Once we boarded the train, we saw that it was really cute and small; it was selfie time! Totally irresistible. After everyone had snapped photos to their heart’s content, we boarded and started our ride, which we knew would be 7.6 km long and take approximately two-and-a-half hours – one hour to get to the summit and 30 minutes chilling before starting the return trip.

In good weather Ireland, Scotland, England and the Isle of Man are all visible, as well as 24 counties, 29 lakes and 17 islands

The best thing, however, is that the fun starts immediately. The scenery is spectacular even from within the train carriages themselves. The carriages have huge glass panels, planned with those of us who were keen on taking photos in mind.

The train chugs along relatively slowly, both to give us tourists a chance to take pictures and also because the mountain terrain is not easy to traverse. A multitude of sheep and goats looked upon us benignly, while we gazed in wonder at the magical panorama unfolding around us. Gone were all traces of modern civilization, replaced instead by nature, animals and plants. Snowdonia National Park is, in fact, a national nature reserve and contains a large number of rare flora and fauna. 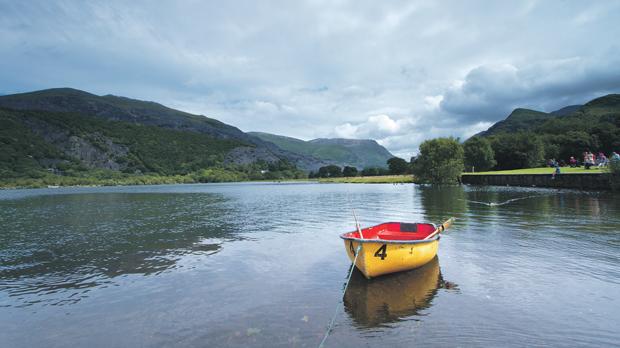 Lake Glaslyn has inspired many a legend.

As the driver gave us his spiel, he told us about how Snowdon Mountain was formed out of volcanic rocks sculpted by ice during the Ice Age; we were amazed to see a waterfall plunging majestically into a 20 metre gorge directly below us.

Cameras clicked madly as the train emerged into the open, treeless countryside and we had the first glimpse of the sharp peak of Snowdon. The landscape all around us was dotted with many tiny abandoned, simple shepherd dwellings. Just behind the ridge, we could also see the Snowdon Ranger path, as well as the youth hostel. Some intrepid young people, burdened with climbing gear, picnic baskets and jackets, were starting to walk along the track up the mountain and we waved at them gleefully as we passed. 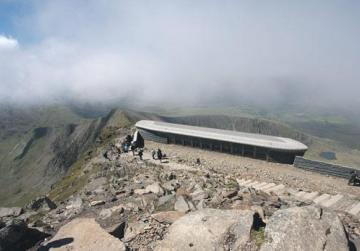 Coffee time perched on top of the world.

While the journey from Llanberis (that is, the foot of the mountain) to the small station at the summit, takes an hour by train, it usually takes around six hours, for those who brave the journey on foot, depending of course, on the path taken.

There are in fact, six main routes to the summit, ranging from beginner to expert mountain climbing skills. Climbing the mountain on foot is not as hard as one might think, especially in good weather conditions. However, one must keep in mind that the right equipment, know-how, and resources are needed. Mountain slopes can be treacherous and slippery, and a rather worrying number of people have ended up injured in their attempts to make it to the summit – and even worse, on some tragic occasions.

Snowdon village could be seen below us at this point. We could also see the passage of time when we looked at the old quarry near it, which showed the sedentary rock blending into slate.

Very colourful and interesting. As the train continued its journey upwards, we could also see the Hill of the Falcon in the distance – so called because it is the home of a large number of rare Peregrine Falcons, as well as Llydaw Lake, which is one of Snowdonia’s deepest lakes. Half-way up the mountain we stopped for the train to refill its tanks and for the tourists to have a cup of coffee at the halfway café. It was really getting chilly at this point and I bemoaned my fingerless gloves and thin hood, which weren’t nearly enough to protect me from the glacial climate.

Beyond the coffee shop, we could see Glaslyn Lake, with its seemingly black and silent waters. I could very well understand how this strange place could inspire people to believe in the legend of the afanc, a water-monster believed to have taken up residence at the bottom of its waters. Another legend relating to Snowdon Mountain relates how the giant Rhitta Gawr, who wore a cloak made out of men’s beards, was killed by King Arthur after trying to take his beard, and is buried at the top of Snowdon.

The scenery is spectacular even from within the train carriages themselves

As we approached the summit, it was so cold that the drops of mist were like rain against the window panes. Everything was obscured as we entered a cloud of condensation and, as the doors opened to admit us to the coffee shop station at the top, we were told to be mindful of the time and to make sure we did not miss the return train, as there would be no more journeys for that day. 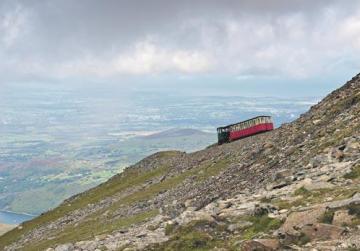 The difficult terrain means that the railway only operates in the mildest of weather.

Frozen stiff, but motivated by the knowledge that the best was yet to come, we started walking towards the peak which, we were told, was only a few steep steps ahead. These few steps, however, were extremely wet, slippery and uneven steps, which one had to climb in the blinding mist and freezing wind. I admit at this point I was quite scared, but I consoled myself by thinking about the amazing view awaiting me.

Snowdon is well known to offer one of the most extensive views of the British Isles – since in good weather Ireland, Scotland, England and the Isle of Man are all visible, as well as 24 counties, 29 lakes and 17 islands.

Unfortunately, for me this was not one of those days. Snowdon is close to the sea, which means that the weather changes frequently. The only thing I saw from the summit was a wall of mist. I took a photograph with the height marker at the peak and we went back for the return ride. Although I did not get to see the famous panorama I was aiming for, it was still a memorable experience, because the journey up the mountain was an adventure in itself.

Still, Snowdon remains an unreachable mystery, so perhaps someday I will go back, and who knows, maybe that day I will try to brave one of its rock-climbing routes on foot.