The man who was shot dead in Marsa on Friday knew there was an imminent plot on his life, police sources told The Sunday Times of Malta. 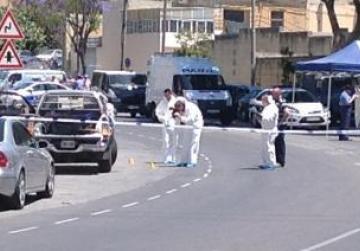 Paul Degabriele was known to police as a ‘bad apple’ with extensive knowledge of firearms, partly through a short career in the Armed Forces where he earned his nickname: is-Suldat (the soldier).

He was also known to be a tough character, but well-placed sources said Mr Degabriele knew there would be an imminent attempt on his life and made it apparent to people close to him that he was fearful.

“It says a lot when a fellow like is-Suldat looks that scared,” the source said.

The theory is that his murder was payback in a tit-for-tat game that has been going on for some years.

Just last December, Mr Degabriele had been arrested in connection with the murder of 45-year-old Joseph Cutajar il-Lion in Mosta.

Two months earlier, Mr Degabriele had escaped an attempt on his life when he was alerted about a man acting suspiciously next to his Toyota pick-up truck and a car bomb was discovered.

He was not so lucky on Friday, when he was shot dead at close range in broad daylight just outside Sammy’s Bar, near the Enemalta Customer Care office in Marsa.

His assailant was waiting for him when the 48-year-old Fgura man walked out of the bar at around 11am.

The killer walked up to the vehicle just as Mr Degabriele and his friend, Thomas Spagnol from Żejtun, were climbing into the pick-up truck and shot him three times in the head and twice in the upper body with a 9mm pistol.

The killer then jumped in a stolen Nissan van driven by an accomplice and sped off before abandoning the vehicle in a private underground garage in Dun Frans Camilleri Street, Ħamrun.

Certain elements of the murder, such as the fact that it took place in broad daylight in a busy urban area, makes the police believe the killer was a hit man, possibly Sicilian.

The case bears some resemblance to the murder of 49-year-old car dealer Raymond Agius, who was shot dead at point blank range in 2008.

His killer entered a Birkirkara bar wearing a crash helmet, walked straight up to the victim, who was having coffee, and shot him in the head with a pistol before escaping with an accomplice on a motorcycle.

Although Mr Degabriele had only ever faced relatively minor charges of theft and aggravated theft, he had been a suspect in a number of serious crimes over the years.

In the 1990s, he was investigated in connection with a plot to murder the fiancée of an associate out at sea.

His name also cropped up during investigations in connection with the killing of 24-year-old police constable Mark Farrugia, who was shot in the back in 1999 outside his home in Tarxien.

His former colleague, Etienne Carter, who was 21 at the time of the crime, was sentenced for killing the young policeman and was jailed for 22 years. However, during his trial, Mr Carter had claimed the actual shooter was another man.

He described the killer as “the bullet man” and insisted that everybody knew he had killed PC Farrugia.

“Everybody knows. The police know. The whole of Tarxien knows. So do PC Mark Farrugia’s relatives,” he said.

But he refused to name the man he was referring to.