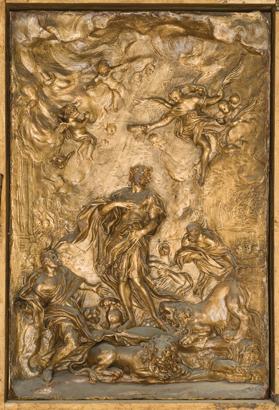 When I entered in the Mdina Cathedral sacristies for the first time as a seminarian back in 1980, I was immediately struck by the beauty of four framed sculptured reliefs hanging on the walls of the sitting room.

I was able to perceive that, beneath the thick layers of pigments, lay the hand of a great master.

In fact, several years later, they have been restored and identified as being works by the prominent Maltese sculptor of the Roman baroque period, Melchiorre Cafà (1636–67).

These bozzetti were exhibited in Palazzo de Piro, Mdina, in 2010 and published by Giuseppe Mantella and Sante Guido in Melchiorre Cafà Insigne Modellatore (Rome, 2010). These works of art were also exhibited at the Accademia di San Luca in in 2012.

I consider it pure luck when I identified another wax bozzetto showing the Glory of St Catherine of Siena as being of superb quality when it was placed on sale in a local public auction in 1995.

In fact, this bozzetto was identified as the work of Cafà by Dr Jennifer Montagu of the Warburg Institute, London and Keith Sciberras (now head of the Department of History of Art in the University of Malta).

This sculpted relief was exhibited for the first time at the National Museum of Fine Arts, Valletta, in 2003 during a symposium organised by Sciberras, and eventually published by the him in his publication Melchiorre Cafà. Maltese Genius of the Roman Baroque.

This time, my attention fell upon a rather large wax bozzetto showing the Martyrdom of St Eustace, which is conserved in a religious institution.

As soon as I saw it, I immediately noticed the same modelling and invention of the above mentioned wax bozzetti. This is being published here for the very first time.

Once again, this model has been painted in a golden bronze patina and retouched to accentuate the facial features, an intervention which should be removed at once.

One can only imagine the beauty which will emerge when the paint is removed to reveal the fine modelling and its crisp flowing details. 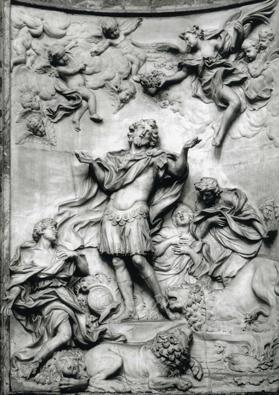 The Martyrdom of St Eustace in marble that is found in Rome.

The Martyrdom of St Eustace was Cafà’s first major independent work in Rome. It was commissioned by Camillo Pamphili in 1660 and was intended to form part of the embellishments for the in Agone.

Rome in the baroque period resembled a gladiators’ arena, with great rivalry among the artists striving to show their virtuosity; Cafà proved himself with bravura and was praised by no less than Giovanni Bernini himself.

The number of studies for the St Eustace which have survived prove how Cafà had toiled hard with the composition, modelling, and perfecting his invention in clay and wax.

These studies are a gold mine for researchers and enable one to make the necessary comparisons which reveal the approach in which the artist evolved his invention leading to the finished work.

The central figure of St Eustace can be easily compared to the painted wax model of a martyr saint conserved in Valletta’s fine arts museum and a terracotta model of the same saint conserved in the Liebieghaus collection, Frankfurt. The saint is modelled in a serene posture, gazing upwards in a submissive way towards the horrid imposition of martyrdom, as he holds a palm frond symbol of victory. 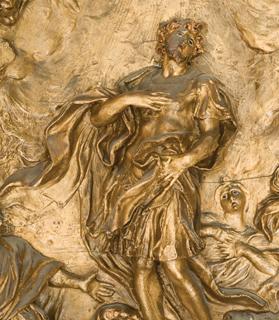 Detail from the wax model.

The angelic Gloria surmounting the martyr saint shows striking resemblance with other compositions in which cherubim and angels are presented in a flowing manner floating upon cushions of clouds.

One should observe the angel holding the martyr’s insigne, wrapped in billowing garments, with a twisted torso, which is similar to the one hovering over the Dominican saint in the Glory of St Rose of Lima exhibited in the Cathedral Museum collection, Mdina.

Another noteworthy semblance refers to the kneeling male figure on the left which is practically identical to the one in the marble sculpture in St Agnese in Agone and the terracotta model of the Carnegie Institute of Arts, Pittsburgh.

The one in the Malta wax group, however, is seen showing his left foot and his cloak cascades over his right forearm.

Another detail is the group of lions at the foot of the martyr saint which shows a variation in the composition when compared with existing studies. The reclining lion in the foreground is modelled in the posture of the marble sculpture but with its head turned in a frontal position.

These are initial studies on this magnificent work of art; further studies will follow to reveal more insights on the genius of the most prolific Maltese sculptor of the 17th century, a heritage which we must cherish with pride.

Fr Edgar Vella is curator of the Cathedral Museum, Mdina.