Freeheld came to the big screen in the US in September 2015, a short while after the US Supreme Court ruled that all Americans, including same-sex couples, are guaranteed the right to marriage. It can be argued that the events that played out in Ocean County, New Jersey a decade earlier played a small but significant role in the landmark Supreme Court decision.

A little while after entering into a domestic partnership with Stacie (Ellen Page), decorated New Jersey police detective Laurel Hester (Julianne Moore) is diagnosed with Stage IV lung cancer. Laurel wants Stacie to continue to receive her police pension benefits after her demise – as any spouse is lawfully entitled to – however officialdom in the guise of the Freeholders (as New Jersey’s elected county officials are called) forbids her from doing so. With the help of equality rights activist Steven Goldstein (Steve Carell) and despite rapidly failing health and her own misgivings, Laurel fights for the justice she and Stacie deserve.

Freeheld has a strong pedigree behind it. It is based on the 2008 Oscar-winning short documentary of the same name and adapted by Ron Nyswaner, the Oscar-nominated screenwriter of 1993’s Philadelphia... yet despite fully-committed and moving performances by Moore and Page – with solid support from Carrell and Michael Shannon as Laurel’s long-time police partner and friend Dane Wells, the film inexplicably never develops into anything more than a based-on-a-true-story TV film of the week.

Director Peter Sollett keeps things moving at a very staid, straightforward and conventional pace. As the story unfolds, he is to be commended for eschewing melodrama on one hand, yet he inexplicable stifles the emotions on the other as the story ticks the narrative boxes without opening them up or giving them much depth.

And so the film opens establishing Laurel’s credentials as a hard-working and respected veteran of the police force – (the opening scenes see her arresting some hardened criminals) her tentative blossoming relationship with the much younger Stacie (their meet-cute at a volleyball match and the resulting romance showed so platonically as though not to offend) and the sudden and harsh cancer diagnosis (admittedly handled well) to the fight that follows, which becomes little more than a standard courtroom drama.

Because what has gone before is handled so distantly, once the outcome is known, the film does not deliver the emotional wallop you would expect from such an affecting, true-life story, especially one that was so important in the fight for LGBT equality.

That said, it is difficult to fault the quartet of actors at the centre who succeed in giving the story some heart. Moore easily falls into the category of actors who rarely give a bad performance, and she is thoroughly sympathetic and heart-wrenching as Laurel, the very private woman drawn into a public battle for what is rightfully hers as she also combats a painful, debilitating disease.

It may not match the heights the actor reached in her Oscar-winning turn in Still Alice, but Moore knows how to portray pain and suffering in an affective and inspiring way without descending into mawkishness.

Moore shares good chemistry with Page, her younger co-star matching her beat for beat as the woman struggling with helplessness as she watches her partner fading away and Steve Carell adds some light touches in an otherwise rather sad story as the colourfully loud and determined activist.

Kudos also to Shannon’s Wells, the detective who goes all out to support the cause. A scene where he finds out that Laurel is gay and gets really upset, not because he is homophobic but because he’s offended she never trusted him enough to tell him is nicely judged and offers some insight which many of the other characters often lack, especially the Freeholders who are portrayed rather one dimensionally.

I couldn’t help rolling eyes at one member’s resorting to the oft-used chestnut that same-sex marriage could threaten “the sanctity of marriage”, but Josh Charles’s performance as the only sensible, sympathetic and unprejudiced member of the freeholders board tempers that somewhat. 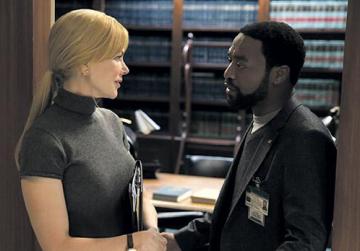 Nicole Kidman and Chiwetel Ejiofor in Secret in Their Eyes.

Secret in Their Eyes, Class: 15, KRS Releasing Ltd: A tight-knit team of rising investigators – Ray (Chiwetel Ejiofor) and Jess (Julia Roberts), along with their supervisor Claire (Nicole Kidman) – is suddenly torn apart when they discover that Jess’s teenage daughter has been brutally and inexplicably murdered.

Now, 13 years later, after obsessively searching every day for the elusive killer, Ray finally uncovers a new lead that he’s certain can permanently resolve the case and bring long-desired closure to his team.

No one is prepared, however, for the shocking, unspeakable secret that will reveal the enduring, destructive effects of personal vengeance on the human soul.

The film is based on an Argentine movie originally titled El secreto de sus Ojos by director Juan José Campanella, which was in turn based on a novel by Eduardo Sacheri. It won the best foreign language film at the Academy Awards in 2010.

However, writer-turned-director Billy Ray does not manage to replicate the original’s success.

Among others, critic Mark Kermode of The Guardian, wrote: “Chiwetel Ejiofor and Julia Roberts struggle to ignite this American remake of the Oscar-winning Argentinian crime thriller.”

The film has indeed fared poorly at the US box office with $20 million takings since its release in mid-January.