The story of the Nativity has seen many incarnations on the big screen and the animated The Star brings us the evergreen, seasonal tale with a slight twist as told from the point of view of the donkey that carried Mary to Bethlehem.

Bo the donkey spends his days going around in circles, literally, as the poor creature is tied to a mill under the watchful eye of his horrible master. One day, Bo, with the help of his friend Dave the Dove, manages to escape his shackles and finds shelter in the home of Mary and Joseph, a couple who have just got married. All this, while Mary is trying to find the best way to explain to Joseph that she is pregnant with the son of God.

As Joseph is dealing with this rather startling news, he and Mary set off to Bethlehem unaware that they are being followed by one of King Herod’s henchmen – for the evil king has not taken too kindly to the news that a new king is about to be born and steal his thunder.

Bo becomes privy to Herod’s nefarious plan and sets off with Dave to warn Mary and Joseph of the impending danger.  On their way, they meet up with Ruth, a curious and over-friendly sheep. In the meantime, Three Wise Men from the Orient and their wise-cracking camels are also searching for the new king.  And so, this motley mix of humans and animals set out on a journey to that fateful stable, as an impossibly bright star shines upon them from above.

Its novel approach will undoubtedly appeal to the very young ones, with enough charm, heart and humour to entertain the adult members of the audience

If The Star lacks the sophistication we have become accustomed to in animated movies, it certainly earns good marks from its no-frills storytelling and solid characterisation. The familiar story is very well told and its novel approach will undoubtedly appeal to the very young ones. And there is enough charm, heart and humour to entertain the adult members of the audience. 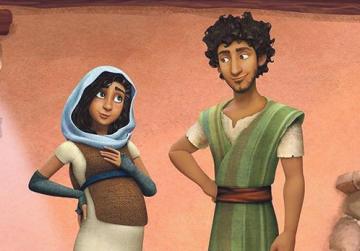 Kudos also to the film-makers for delivering its heart-warming Christmas message without resorting to overt proselytisation. In its basic premise – that in seeking adventure in his life, the little donkey Bo ultimately ends up carrying out an act of enormous importance, unaware that this young unassuming couple he wants to help is destined for great things – the story expertly elaborates on its themes of friendship, kindness, humility and hope.

The soundtrack is peppered with a number of classic Christmas songs and a couple of new ones, with the title track performed by Mariah Carey.

The voice cast is led by Steven Yeun as Bo the donkey; Gina Rodriguez and Zachary Levi give Mary and Joseph a youthful, engaging and modern twist, Keegan-Michael Key provides much of the humour as the adventure-seeking Dave the dove, Aidy Bryant is Ruth the sheep, Ving Rhames and Gabriel Iglesias are the fierce dogs in pursuit of Joseph and Mary, while Christopher Plummer lends his voice to the murderous King Herod. Tracy Morgan, Tyler Perry and Oprah Winfrey are the three camels Felix, Cyrus and Deborah.