A businessman who had approached other entrepreneurs with a plan to develop a new LNG-fired power station in Delimara before the last general election is now a shareholder in Electrogas Consortium, the successful bidder for the multi-million euro Enemalta project.

However, Paul Apap Bologna, owner of a company which imports pharmaceuticals, vehemently denied he had struck a pre-electoral deal with the Labour Party.

“I deny ever discussing the supply of LNG and production of energy in Malta with the Labour Party or any of its representatives before or even after the election,” Mr Apap Bologna told The Sunday Times of Malta.

When contacted, the government also denied ever discussing the energy proposal with Mr Apap Bologna.

A presentation used by Mr Apap Bologna to market his proposal before the election, seen by The Sunday Times of Malta (see table), included plans to moor an LNG tanker, to be used as a storage facility, adjacent to the existing power station in Delimara.

In the presentation, Mr Apap Bologna states that the consortium building the new facilities will include a Maltese investors group, “assembled and led by Paul Apap Bologna”.

“We do not want to come to Malta as an entirely foreign group. The investor group will comprise a diverse group of Maltese citizens and prominent business families,” the document states.

Apart from ‘Green Energy for Malta (GEM)’, the name used by Mr Apap Bologna before the election to indicate the Maltese businessmen in this project, he had also listed Gasol, a London-based listed gas monetisation company, as a leading partner.

The winning bidder selected by Enemalta, Electrogas Consortium, includes the same companies Mr Apap Bologna was promoting before the election.

GEM Holdings, the Maltese arm in the deal, was set up last year and has Mr Apap Bologna, Mark Gasan and Yorgen Fenech as directors.

In his proposal, Mr Apap Bologna, who was also appointed by the government to serve as a planning authority board member, calls upon Enemalta to enter into a long-term power purchase agreement so that his consortium can secure project financing.

Electrogas Consortium – the only consortium of the 19 bidders for Enemalta’s Expression of Interest with a Maltese shareholding – managed to fend off major international players in the oil and gas industry, including Gazprom, Shell and Edison. 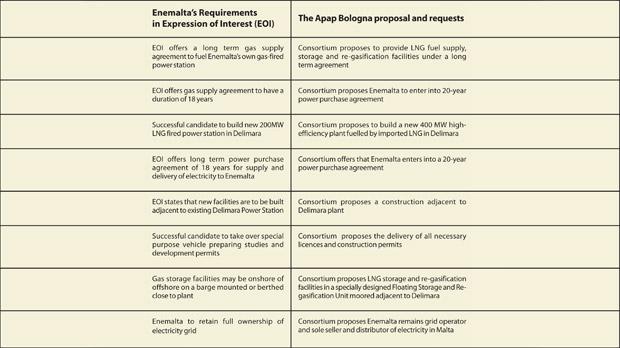