Denise Azzopardi delves into the chilling tale of Nosferatu as she looks forward to Wayne Marshall’s organ improvisations over the film as part of this year’s Malta International Organ Festival.

Have you heard of Nosferatu? You most likely have. This fictitious figure is the central character in one of the greatest and most influential horror films of all time –  F. W. Murnau’s 1922 Nosferatu: A Symphony of Horror, based on Bram Stoker’s 19th century novel Dracula.

He is rather hideous with his pointy nose and ears, talon-like fingers and fangs that are situated at the centre of his mouth like a rodent’s. In fact, Nosferatu is more animalesque than human, which sets him apart from other vampires or Draculas we see in films or on Halloween masks.

Nosferatu first appears in the film as the more human – yet still horrifying – character Orlok, a Transylvanian count who is looking to buy an isolated house in Wisborg, Germany.

Estate agent Knock sends his associate, Thomas Hutter, to meet the count to sell him the house right next to Hutter’s. Hutter meets up with Orlok at his castle in the misty Carpathian Mountains and is attacked by his vampire alter ego. Orlok then travels to Hutter’s village on an eerie boat containing a rat-infested coffin, as he’s got his eyes on Hutter’s innocent wife Ellen.

We’ll be able to watch, hear, and feel this spine-tingling tale unfold as the UK, Malta-based organist, Wayne Marshall, will bring Nosferatu back to life with his organ improvisations that will accompany a live screening of the film. This will take place at St Paul’s Anglican Pro-Cathedral, Valletta, on December 1 at 7.30pm.

I’m a great fan of this spooky classic, and I’ve no doubt that Marshall will come up with some awe-inspiring sounds

Just as the title, A Symphony of Horror, implies, Nosferatu is not just a breakthrough in the realm of silent cinema, but is also a musical representation of horror, for which leading German film composer Hans Erdmann was responsible. It has a score that is abound with diminished chords that give the music that creepy feel. I’m eagerly awaiting this performance as I’m a great fan of this spooky classic, and I’ve no doubt that Marshall will come up with some awe-inspiring sounds.

The event forms part of the Malta International Organ Festival. Last year’s was such a joy to attend, with a fantastic line-up of well established artists, that I’d made it a point to not miss out on this year’s fourth edition, which is turning out to be equally successful.

The festival got off to a good start last Tuesday with its opening concert at St Francis of Assisi Church, Valletta. I was able to enjoy the musical energy emitted by German musicians Julian Mallek on the organ and Semjon Kalinowsky on the viola. 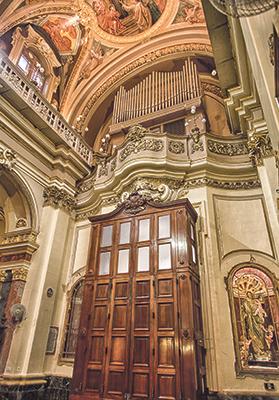 Following that, the teatime concert All’Opera on 4 hands (and feet), with Italian Giuliana Maccaroni and Martino Pòrcile at the organ at St Paul’s Anglican Pro-Cathedral, Valletta on December 3 at 5pm; a celebration for the 18th-century positivo organ that’s been newly restored by Robert Buhagiar, comprising an organ and voice recital by Hugo Agius Muscat and baritone Joseph Lia, at Our Lady of Victories Church, Valletta, on December 5 at 7pm; and finally, the grand closing concert featuring organ and orchestra with Marco d’Avola and the Valletta Chamber Orchestra under the direction of Riccardo Bianchi at St Augustine parish church, Valletta, on December 7 at 8pm.

Festival founder and director Joseph Lia was yet again successful in coming up with a jam-packed programme for this year’s edition. I’d have loved to attend all concerts if I could, but it’s impossible to be out every evening having recently taken on the new role of mum! So I’ve had to pick just a few.

This year’s festival runs until December 7. A full programme is available online.