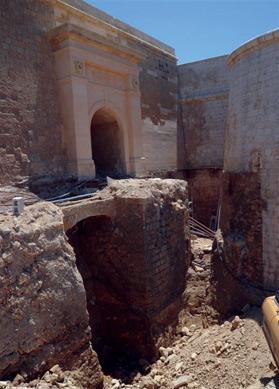 Part of the newly discovered original entrance passageway into the Citadel. This structure, partly built and partly cut out of the greensand outcrop, would date to the later decades of the 17th century or early 18th century. Source: www.artclon.com

The original entrance to the Citadel in Victoria was recently exposed during restoration works on the bastions and fortifications.

The gateway, thought to date to the beginning of the 17th century, leads to a passageway that is partly built from globigerina blocks and partly cut into the soft, greensand rock.

The restoration works also uncovered the end of a sally port, an underground passageway that led from the Citadel to a ditch, which the British later filled up with rubble.

The aim of these military features was to improve access from the ditch into the Citadel.

Both sally ports will be restored and opened to the public as a new attraction to the site.

Project coordinator and historian John Cremona explained that, between 1853 and 1868, the British effected major works to improve accessibility to the Citadel.

“We always think that the Citadel was as easy to access as at present but, in the past, it was harder.

“First you would have encountered a ravelin [a small outwork used to protect the inner defences of a fortification], then you would need to cross a bridge to get to the entrance of the passageway. The Citadel was not easy to access, to make it harder for the enemy to infiltrate.” 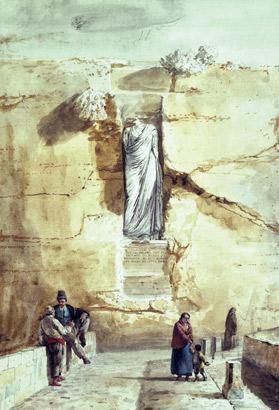 Jean-Pierre Houël’s Antique statue in Rabbato on the island of Gozo.

One of the major flaws of the Citadel though is that it is built on an outcrop of greensand, a soft rock that made it easy for the enemy to potentially dig a tunnel and infiltrate the fortifications.

Mr Cremona said that the latest discoveries matched what modern historians had surmised from past accounts, such as that of Jean-Pierre Houël, and other sketches.

Towards the end of the 18th century, the French author, traveller and painter published a monumental work in four volumes entitled Voyage Pittoresque.

In this work, Houël chronicles his extensive tour of Sicily and Malta between 1776 and 1780.

He writes an eyewitness account of the Citadel as follows: “One arrives at the castle by a steep road, which partly encircles the hill and passes through strong gates and drawbridges between which there is a stone bridge; the end of this bridge is opposite this ancient stature [pictured] just as one arrives at the top of the slope.”

Mr Cremona hopes that further excavations might reveal the stone bridge that Houël refers to.