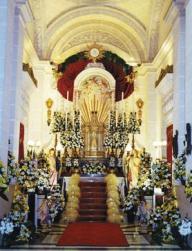 On Maundy Thursday (Ħamis ix-Xirka), there is a ancient tradition of visiting the seven churches where the Blessed Sacrament is placed at the Altar of Repose (Is-Sepulkru). Following the Mass of the Lord’s Supper, the Blessed Sacrament is taken on a procession through the church and reposed in the tabernacle specially decorated with flowers and candles and in some places also with vetch (ġulbiena) for the adoration of the faithful. Photo shows the Altar of Repose at Mellieħa parish church, which has been taken care of by the parish’s sexton Christopher Bartolo for the past 37 years. Mr Bartolo, with the help of four other men, starts putting up the decorations three days before Maundy Thursday. The choice of flowers and the flower arrangements are also the responsibility of Mr Bartolo.

Since the earliest days of Christianity, the Passion, Death and Resurrection of Our Lord Jesus Christ have been observed as the greatest and most solemn feast of the year.

However scanty the information about the first century may be, the earliest explicit reference to the commemoration of Good Friday in conjunction with Easter comes from Tertullian (AD 160-223). Tertullian uses processio and procedere in the sense of to go out, appear in public, and, as applied to a Church function, processio was first used in the same way as collecta, that is, for the assembly of the people in the Church.

These public manifestations could only be properly held and recorded when the persecution of Christians in the Roman Empire ceased, and with the Edict of Milan in AD 313 the Emperor Constantine (AD 307-337) decreed toleration for all religions, including Christianity. It was Emperor Theodosius (379-395) who in 380 declared Christianity to be the one and only official religion of the Roman Empire.

The procession with palms on the sixth Sunday in Lent, that is, Palm Sunday – the beginning of Holy Week – was held as early as AD 400 in the Holy Land.

The early Church was divided about whether the human form ought to be portrayed in art. This was because Old Testament prophets were so forcefully against such images.

It was Pope Gregory I (circa 540-604), known as Gregory the Great, who declared that paintings were an important vehicle in teaching Scripture stories. This was a development that left a great impact on art from the early Middle Ages.

As regards the development of sacred sculpture, this was of a much later period, since Byzantine decrees of the eighth century prohibited images, although Rome considered them useful.

A gulf opened between Rome and Constantinople in the ninth century. In Western art there was a fresh growth of sculpture while in the East there was its diminution. It was in the West, with the building of the great churches in the Middle Ages (fifth to 15th century) and the development of Gothic art 1180 to 1500) that sculpture expanded.

Holy Week and Good Friday processions in Malta are, as in most of the Christian world, of a much later origin. Good Friday statues in Malta and Sicily were and are still referred to as the ‘mysteries’, a reference to the five Sorrowful Mysteries of the Holy Rosary.

This dates the Holy Week processions to after the acceptance of the Rosary by the Church in 1214, when St Dominic (1170-1221) gave it to the Church in its present form, of course, without the Luminous Mysteries introduced by Blessed Pope John Paul II (1920-2005) in October, 2002.

The Good Friday processions came at the time of the Battle of Lepanto of October 7, 1571. At the dawn of that day, Pope St Pius V (1504-1572), accompanied by many faithful, recited the Rosary in the Basilica of St Mary Major, in Rome.

From dawn to dusk the prayers continued in Rome as the Christians and the Muslims battled at Lepanto. When it was all over, the Turks had been defeated, and of their 270 ships, at least 200 were destroyed. The Turks also lost 30,000 men while Christian casualties numbered between 4,000 and 5,000.

It was at this time that the Rosary, as a powerful prayer, reached new heights – it had won a great military victory at Lepanto. Following this victory, Pius V declared that henceforth a commemoration of the Rosary would be a part of the Catholic Church’s Mass every October 7. His successor, Gregory XIII (1502-1585), went further; in 1573 he established the feast of the Most Holy Rosary, which was to be celebrated in all churches which had specific altars dedicated to the Rosary.

It was only in 1342 that the Franciscan (Minor) friars were granted the custody of the Holy Land by Pope Clement VI. We know that by the end of the 16th century, the lay confraternity of St Joseph attached to the Franciscan friary (Ta’ Ġieżu) in Rabat, Malta, was, perhaps, the first on the island to organise a Good Friday procession on the island.

The Good Friday processions came at the time of the Battle of Lepanto of October 7, 1571. When it was all over, the Turks had been defeated. The Rosary had won a great military victory

This was followed, some years later, by its counterpart attached to the Valletta friary in 1645. All this goes to show that although the Franciscans were involved in the spreading of this devotion, the Sorrowful Mysteries of the Holy Rosary were at the very centre of these processions.

This applies also to neighbouring Sicily, where Passion statues are still referred to as I Misteri – again, an allusion to the Rosary’s Sorrowful Mysteries. We know that Good Friday processions were already being held in Vittoriosa around 1700, Żejtun in 1742, Qormi in 1764 and Luqa in 1795.

The tradition of holding processions on the Fridays in Lent dates from the time of Pope Gregory XIII (1502-1585). These started with his Bull of August 6, 1573, Pastoris Aeterni. These processions were at first without statues – they were introduced later. In Valletta, in 1778, the ‘stational’ churches were of a permanent nature and the statues of the Passion were carried there annually.

There was a time when such processions, in some places, started being held on the first five Sundays in Lent.

In the past, at Qormi, for example, the Passion statues, representing the five sorrowful mysteries of the Rosary, used to be carried in procession one at a time through the streets on each of the first five Sundays in Lent. Thus, on the first Sunday in Lent the statue of the Agony in the Garden was taken to the chapel of St Mary of Qrejqċa; on the second Sunday, the Scourging at the Pillar to the chapel dedicated to St Peter; on the third Sunday, the statue of the Crowning with Thorns to St Catherine’s church; on the fourth Sunday, that of Jesus falling under the Cross to the old Qormi cemetery church; and on the fifth Sunday, the statue of the Crucifixion to the church of Our Lady of Victories.

A detailed study of these processions held in Valletta is given by Fr Ġorġ Aquilina, OFM, in his book Il-Ġimgħa l-Kbira tal-Belt (1986). This, again, goes to prove the direct link between the Rosary and the Passion statues.

However, most probably, Good Friday processions started with a Crucifix, then the statue of Jesus laid to rest. Both were used during the old Good Friday liturgical service. To these, some time later, five statues representing the sorrowful mysteries were added; then Our Lady of Sorrows and the Veronica statue.

The oldest brotherhood of Seville, El Silencio (The Silence), was created in 1340, but most of the brotherhoods were formed in the 16th century by clergy, noblemen, guild members, or racial minorities. In Granada, the brotherhoods are much younger. Except for San Agustin, they were all established in the 20th century.

Today, members of brotherhoods consist of religious laymen only. They have their own symbols, traditions and habits thus reflecting their religious and social background.

In 1521, the Marques de Tarifa returned from the Holy Land to Salamanca with a whole new perspective that he was anxious to spread. Feeling inspired and religious after his journey, he institutionalised the Via Crucis (Stations of the Cross) and mandated that it be commemorated each year with a procession.

The single procession held on one day each year eventually broke up into various processions, each depicting a scene of the Passion. This began to spread out over the course of the Semana Santa (Holy Week), while the simple crosses and altars evolved into the elaborate group statues that we see today.

All this goes to illustrate that the Good Friday processions, with the easiest statues, representing the sorrowful mysteries of the Rosary, very likely originated at the time of the Battle of Lepanto of 1571.