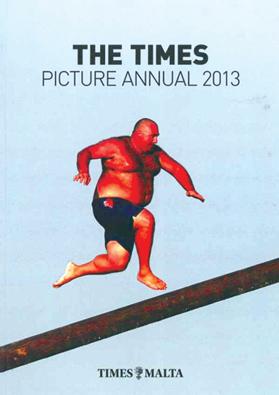 The camera is apt, loaded, ready to select that infinitesimal moment in time; preserving it for all to see and share. This is what the camera does best. No other medium can achieve this. Photographs capture a moment that’s gone forever, impossible to reproduce.

Leafing through the 2013 edition of The Times Picture Annual reminds me of a remark by Susan Sontag about how “photographs, which package the world, seem to invite packaging”.

For many decades, the book has been the most influential way of arranging photographs, thereby guaranteeing them longevity, if not immortality. This album is, as Ray Bugeja reaffirms in the foreword of the annual, “a celebration of photojournalism and of photo-graphy in general, and a well-deserved tribute at that”.

Viewing all the photographs reproduced in this book makes me aware of a constant – framing and composition. The photographer edits the meanings and patterns of the world through an imaginary frame.

The quintessential photograph taken by Darrin Zammit Lupi on page 134 embodies sense of timing, narrative sweep, and wit, thus en-downing the act not merely with intelligence, but with that quality of formal rigor that defines a work of art.

I cannot help thinking of a favourite comic book superhero from the 1960s, Fatman the Human Flying Saucer, created by artist Charles Clarence Beck and writer Otto Binder. The charging act of an oversized man, defying gravity as he leaps up the greasy pole, is further accentuated by the lump of grease falling off the pole as it takes the shuddering of his weight. Rightly so, this image is also reproduced on the front cover; however the picture now loses its balance, cropped to fit a portrait style.

A celebration of photojournalism and of photography in general

Another captivating picture by Zammit Lupi is the Eritrean migrant on page 21. The framing of this particular photograph leads one to think that the migrant is perhaps inside a cage, and not merely standing against a fence. Thus, the photographer edits the meaning and defines the content to bring out the plight of African migrants.

Chris Sant Fournier’s photograph of a Maltese bus driver, once king of the road, is now tamed behind the wheel and seeks consolation from the king of the jungle. Here the observations of the photographer are noted as oddities in personality, situation, incident, movement and the vagaries of chance.

Matthew Mirabelli plays with the juxtaposition of the human face, and deals with the dyadic logic of the gaze. The photograph reproduced on page 70 shows the averted gaze of Joseph Muscat, in contrast with the direct gaze of the backdrop photograph of a model’s face looking straight at us.

A remarkable photograph and an emblem of suffering by Jason Borg on page 144 captures the human drama and fighting spirit of a four-year-old child as she battles against her illness. The photograph demands the equivalent of a sacred or meditative space in which to look at it. It charges our emotions and triggers feelings of rage and frustration.

There are obviously more interesting pictures to look at in this annual, which also includes images by freelancers, such as the spectacular photograph on page 173 by Paul Zammit Cutajar.

This step should be encouraged and amplified, if one is to try to understand what is happening to photography in the digital age and its widespread democratisation. I feel it is time for Times of Malta to create initiatives in promoting this type of photography by inviting the public to participate in specially-curated art projects, such as the one being conducted by The Guardian as part of the Mass Observation Project.