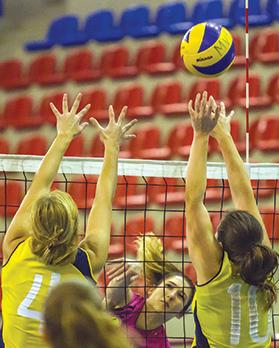 Action from the women’s Super League at Cottonera SC.

Playvolley General Membrane did the same in the women’s First Division after beating Swieqi Phoenix 3-0 to open a six-point lead at the top of the standings.

The match between Paola and FDL was, as expected, tense. In fact, both teams looked erratic at first, particularly in service reception.

FDL held an edge midway through the set through some effective service play from Belinda Milton and Maria Costa to move a step away from wrapping the first point when leading 24-19.

At this point, however, Paola staged a remarkable rally with the upcoming Sarah Spiteri obtaining some valuable points from the outside. FDL were stunned and Paola succeeded in turning the set around and winning it 27-25.

FDL found it hard to recover from that setback and although they tried to stretch their opponents as much as possible on court, Paola never lost focus to win the next two sets (25-22, 25-22) and collect three important points that keep them on top.

Balzan Flyers Crosscraft started their commitments in the Super League with a 3-0 win (25-12, 25-10, 25-16) in the derby against their second team who found it very difficult to penetrate the senior side’s organised block and defence.

In the First Division, Playvolley and Sliema Wanderers continued with their march at the top of the standings, both teams registering wins without conceding a set.

Playvolley overcame a young Swieqi side who only produced their best play in the opening set as Sliema were at their very best to overcome the tough challenge from Birkirkara, particularly in the second set.

Aloysians were unable to repeat the same kind of performance they had against Fleur de Lys the week before, although they did well to win the third set and play it all out in the fourth.

However, Valletta were too strong for them and with Aloysians losing their setter through injury, the Citizens went on to win the match and open an eight-point lead at the top of the standings.

In another match, Fleur de Lys Twistees returned to winning ways after beating an improved Mġarr side 3-0.

Mġarr lost the opening two sets but showed better qualities in the third with setter Alessandro Bertoldo combining well with outside hitter Hussain Alghareeb who scored several points for his team.

However, the FDL boys were still the better side in the third set.

For them, Latvian Edijs Grins proved a valuable asset in both blocking and attacking.