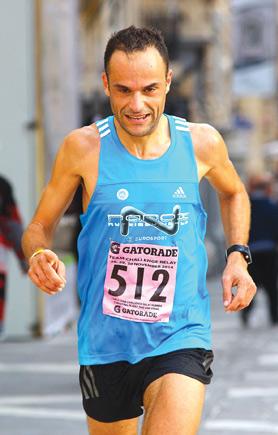 Many athletes owe a lot to the Olympics.

For some, the Olympics have been the launching pad for their athletic careers while, for many others, just watching the Games on television has been the spur that, as youngsters, encouraged them to start athletics.

The Olympics have also inspired Andrew Grech although his story is quite unique.

For one thing, he was an adult when inspiration struck. For another, it wasn’t the summer Olympics that inspired him.

“I’m a police officer and in 2011, I had the opportunity to go to Greece to help police the Special Olympics,” he explains.

“It turned out to be quite an important moment for me because I was really impressed by the effort that the athletes put in.

“I asked myself ‘if these athletes are so dedicated to their sport despite their varying abilities, why shouldn’t I do like them?’

“As soon as I came back I started taking athletics much more seriously.”

By then, Grech had been a fixture in the local road running scene for almost a decade.

“Originally I played football but in 2001 I suffered an injury and, whilst recovering, met with Robert Vella of Mellieħa AC who invited me to take part in a race.

I asked myself ‘if these athletes are so dedicated to their sport despite their varying abilities, why shouldn’t I do like them?’

“I did well and from then on kept running.

“Within a few months, I was notching top-10 finishes but I didn’t take it that seriously.

“If I didn’t feel like training, I’d skip sessions and wasn’t that focused.

“But after coming back from Greece I changed and soon I was winning races.”

His improved form brought international recognition as, last March, he participated in the IAAF World Half Marathon Championships in Copenhagen.

“There were all of the world’s best long-distance runners so I knew that this wasn’t a race where I was going to finish among the leaders,” Grech recalled.

“However, I knew the pace at which I wanted to run and managed to execute the plan perfectly.”

Indeed, he ran so well that his finishing time of 1:10:09 meant that he had broken the national record for the distance.

“In truth, it is an excellent route that is largely flat with very little uphill inclination,” he said.

“The championships were combined with the Copenhagen Half Marathon so in total there were 33,000 people taking part which made it a special experience as did the support we received all along the route.”

While that race probably ranks among the best of his career, the opposite can be said of this year’s Malta Marathon.

“I was out in front among the Maltese runners but ended up dehydrated,” he explains.

“I got a side stitch at the start of the race and every time I drank something the pain started getting worse. So I started drinking less and still felt very strong.

“However, in the final two kilometres I simply couldn’t push on and was overtaken.”

Perhaps it is down to the desire to erase that bad memory that the Malta Marathon features highly among his targets next year.

“I want to win the Malta Marathon,” he declared. “Although I haven’t made a final decision, I think that I will go for it once again.”

Other than that, he is looking to make inroads in the longer distances on the track.

This year he represented Malta in the 5,000m in the European Athletics Team Championship 3rd League in Georgia.

Qualifying for next year’s edition of those championships is one of his objectives as is making it to the Small Nations Games even though the latter target is quite prohibitive.

“I will plan how to approach it with my coach Has Kesra who is of great support as well as my sponsors Nyoo, Garmin, Eurosport and Crystal. Also I’m on the 20/20 scheme which is of great help.

“The qualification criteria for the Small Nations Games are quite high; you almost have to match the national record. But I’ll certainly give it a try.”