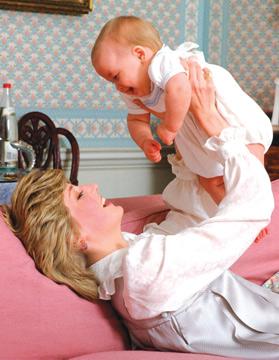 As the Duke and Duchess of Cambridge eagerly await their firstborn child, they may want to take heed of the results from a poll of parents which details exactly how those early days of new parenthood really feel.

Excitement, exhaustion and anxiety were the overwhelming emotions for more than half of the parents polled by Care.com, the largest online care destination in the world with eight million members in 16 countries. A further 47 per cent felt proud and 40 per cent described feeling ‘blessed’ following the arrival of their first child.

British child psychologist Amanda Gummer said: “A new baby turns its parents’ world upside down. Despite all the trappings of royalty, parenthood is a great leveller. The Duke and Duchess of Cambridge can expect to feel like every other new parent the world over when their much-anticipated little prince or princess finally arrives.”

Forty-two per cent of the 751 parents polled said their relationship with their partners had changed since they had had children, and a third said having a baby changed the dynamics of the wider family.

Forty per cent said becoming a parent had made them more money-conscious, but only one in 10 mums said they were more body-conscious since giving birth.

The protective instinct emerges as a powerful one, with 48 per cent of mums saying they now see risk and danger where they wouldn’t have before becoming parents. A third said their perspective on life had shifted and they are more sensitive to world events like war and famine since having children.

And with sleepless nights, a new level of responsibility and a whirlwind of emotions, it’s hardly surprising that over a quarter of mums (28 per cent) said they felt tearful in the first weeks of parenthood.

Sigrid Daniel, UK country director for Care.com, added: “William and Kate will be joining a universal parenting club where, yes, we lose sleep and worry, but we experience the most immense love and pride too. In fact, the only difference we can deduce is in the gift stakes. While Baby Cambridge can expect a 41-gun salute, this poll reveals that the gift non-royal new parents would most appreciate would be the services of a cleaner for a month!”

New parents were also asked what was the best and worst piece of advice they were given as new parents.

And finally, a third of new parents recommend that the best gifts to give when a baby arrives is a cleaner for a month, closely followed by ready dinners for the freezer (30 per cent).

The most traditional gifts of baby keepsakes actually came bottom of the list, with just eight per cent of new parents thinking them a good idea!