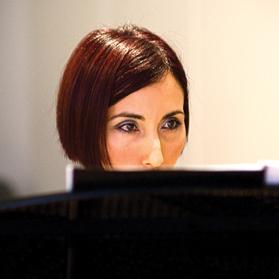 Tricia Dawn Williams’s recitals are always exciting events and her latest, at Sala Isouard, was no less. Usually, the turn-out for such concerts is not a very big one as most local music-lovers tend to lean toward the more classical and traditional repertoire. One must say it was a pleasant surprise to see that the longer arm of the l-shaped Sala Isouard was practically full.

The first work Williams performed was Transe (Aux Batter-ies) by Denis Levaillant. The last in a cycle of 14 images études, it is a powerful, obsessive and ostinato-riddled sequence of clustered scales which build up in power and forcefulness that require great reserves of energy and stamina, something the pianist showed she had in abundance.

The pianist next decided to play some of Bartok’s Bagatelles (Op. 6). When keeping in mind what later composers came up with, it sounds odd that these pieces were once considered too daring and modern for delicate ears.

The piano may not have been ideal for producing certain effects intrinsic to the slower bagatelles, so the pianist chose to perform six faster ones. However, she did perform the Lento (N. 6), which she performed halfway through her selection. It stood out amid surround-ings which were always lively, sometimes even sounding quite conventional.

Being under Maestro Pawlu Grech’s guidance since 1999, it is not surprising that Williams should perform a work by her esteemed mentor. This was Rhapsoidia, dated 1977 and with a deliberately Greek title because the two folk-tunes from which the work’s musical elements are drawn are Greek.

Like so many composers, Grech searches and reaches out for the roots of life, steeped in his own Mediterranean roots and identity. The music evokes a mysticism which the pianist projected very well. She made best use of dynamic and rhythmic variety, the intervals and silences linked with the eternal ever-changing, repeated cycle of life and death, of rebirth and renewal of the cycle.

She made best use of dynamic and rhythmic variety

There is something viscerally primeval about Ruben Zahra’s Pan the Goat-God. Its four movements are a journey one could also associate with the basics of human existence. The first movement, The Forbidden Instinct, smacks of temptation supported by an ostinato and frequent glissandi evoking the rise and fall of the human experience.

Instability perforce marks the atmosphere in Panic & Fear so well, with broken phrases that deliberately interrupted the flow, but that later forcefully built up, leading to headlong panic.

One expected, and got some serenity, in Selene. But halfway through, the movement became rather agitated and energetic, until it faded out. Metamorphosis was in a way the most gripping part of the work, with some jazzy moments, a fine sense of rhythm and a fit conclusion projecting the meeting, clashing and blending of different cultures.

For Antocosta’s Traces of Spirit Whispers, the piano was well prepared and Williams used several devices like plucking of strings and other thumping of the same.

The audio part consisted of recorded and declaimed passages that were not always clear. This was done deliberately so as to allow the merging of the voice with the music even more. It was intriguing and meditative even at its strongest, and the very stimulus produced by the climactic moments made immersion into the piece even deeper.