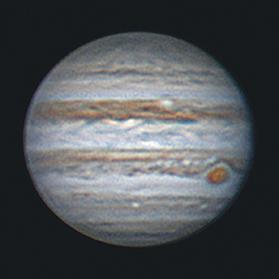 An image of the planet Jupiter, the largest of all planets in our solar system, as shot last week by the author through his telescope. The prominent reddish feature is the Great Red Spot, a giant hurricane, twice the size of the Earth, which has been raging in Jupiter’s atmosphere for at least 300 years.

March is the month for king planet Jupiter. During the second week of the month, Jupiter will be directly opposite the sun in our solar system, as it reaches the position known as ‘opposition’ on March 8. It will then, like all other planets, typically be at its brightest at this time of year. It is already, in fact, the brightest ‘star-like’ object in the night sky and will remain so throughout late February and all of March.

Being directly opposite the sun also means that just like the full moon, Jupiter will rise in the east just as the sun is setting in the west. A nearly full moon will be passing close by it on March 21, the day after this year’s spring equinox.

It will move in and stay in the constellation Scorpius during the month and that is how planets got their names, from the Greek word aster planetes, meaning ‘wandering stars’.

Ancient astronomers observed that these points of light, unlike the rest of the stars, did two things. First of all they varied their brightnesses, since the distances between them, the Earth and the sun, varied as everything in our solar system is in continuous motion around the sun. The sun itself revolves on its own axis.

Secondly, the noticed that planets wandered across the night sky from one constellation to another. This is due to the motion of the planets (including the Earth itself) around the sun, which changes our point of view against the fixed starry background.

In reality, the stars themselves are also moving about around the centre of our galaxy, the Milky Way. However, since the stars are very far away, their motion from our perspective appears very small and is only apparent over the course of thousands of years.

Mars in Scorpius highlights another fact – its name in relation to its alter ego, the bright red supergiant star Antares – the brightest star in the constellation Scorpius. The separation between Mars and Antares shrinks during the month as they appear closer together.

At around midnight, the next bright planet rises – Mars. The red planet brightens up significantly over the course of the month

Antares gets its name from being ‘the rival of Ares’ (anti-Ares), where Ares is the Greek god of war, while Mars is the name given to the same god of war by the Romans.

The alignment of the planets that we saw last month continues with the next planet up, Saturn, around an hour after Mars rises. Mars, Saturn and Antares will lie close together and make an interesting grouping of celestial objects throughout the night.

On March 1 and 2, the waning gibbous moon will join in as well. Saturn will also get to its opposition brightness, but only later this year, in early June.

The last planet to rise in the morning twilight is bright Venus – rising around an hour before the sun next week, but by the month’s end it will rise only around half an hour before the sun and will be difficult to spot. During the last half of June we will see it move into the evening sky as it would have moved behind the sun and over to the other side of its orbit.

Spring returns in the northern hemisphere at 5.31am on March 20. This is when the sun crosses the celestial equator, moving from the southern hemisphere to the northern one, in the celestial sphere. It also means that we get equal hours of daylight and nighttime, after which date the days will continue getting longer and the nights shorter until the first day of summer.

Alexei Pace is president of the Astronomical Society of Malta.