I think it’s fair to say that the past weeks have been eventful for Maltese music in general. The recent Brikkuni’s show at the Manoel Theatre has already been called a watershed moment for Maltese performance arts by a number of people and having been there I find myself solidly in agreement with that view. The day after Brikkuni, I played a show myself, in a very different venue, to a very different crowd indeed, so my weekend was music-laden indeed.

And so was the weekend after that. This time it was the turn of Canadian guitarist Don Ross, who had already played a riveting show almost a year ago, which I sadly missed.

This time, Ross was set to play at the City Theatre in Valletta. I have been there a few times to watch another event that was also put up by Tao Productions – featuring Andy McKee, another acoustic style demi-god of the guitar, about whom I also wrote in awed tones for this newspaper.

I knew all about McKee and had heard his material countless times before I ever saw him live. But, with Ross, I purposely went in through a veil of ignorance.

The evening kicked off with a brief set from local band The Ranch. Now, I had no idea what to expect here, but I do know the drummer, Benji, and know him to be a capable musician indeed. Well, I was hugely mistaken. Benji isn’t just capable; he’s a force to be reckoned with, his technical chops brimming and bringing the band’s improvisational jazz style songs to fruition with endless cadences and rolls. I think I may have had to pick my jaw up from the floor during the three or four-song set this band played, such was their flair.

Infinite kudos also go to The Ranch’s bass player Dean Montanaro and guitarist Kyle Drakard. These guys are hot property. Go watch them if you have an opportunity to do so. I very eagerly await their full-length debut, which will be launched soon. Colour me impressed, boys.

Quite simply a machine of technique and feeling on the guitar

On to the main course of the evening, the friendly Canadian. Taking to the stage to rapturous applause, Ross beamed at the audience with a genuine smile, only to knock us flat when his playing starts. The man is quite simply a machine of technique and feeling on the guitar and nothing will do justice to what he does with his strings than watching him live.

As I was not closely acquainted with Ross’s material prior to the show, I’m afraid I do not remember a single one of the track names, but I’m absolutely certain that this did not detract from my enjoyment of the music on show in the least. 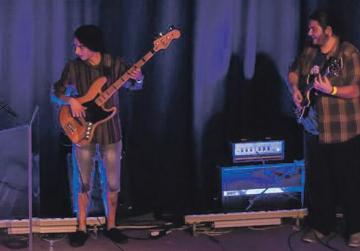 Ross’s masterful song-writing, coupled with his mixed usage of advanced techniques, confident playing and solid delivery with flow and feeling, as opposed to technical slabs of music and his singing all came together for an incredible act.

Launching headfirst into four or five songs from his repertoire, before giving us a break and assaulting us once more with another eight or so tracks, Ross is a born performer. He is friendly, funny, constantly making well-timed, well-honed jokes and keeping up a self-deprecating commentary. He also regaled us with tour anecdotes in between songs. Playing a well-picked set of songs off his albums and an instrumental cover version, Ross was truly at home in front of his audience, which I believe to be the mark of a true professional.

Sure, he may have been away from home for the past 45 days, spending the last 12 days traipsing across Europe, but on stage, he remained focused, friendly, professional and incredibly good.

So good, in fact, that it’s almost unthinkable to know that the full range of sounds is created by one man, two hands,and a guitar. But it is, and next time Ross is around do go watch him, because you will not forget a show like this one very quickly.

Which brings me full circle very neatly. I, for one, am extremely happy to notice the increase of high quality music events happening here. Attend more of them would be my suggestion and let’s show the intrepid organisers that their efforts are appreciated and pay off, so we can keep getting more quality acts, local or not, to play for us on this little rocky outcrop.