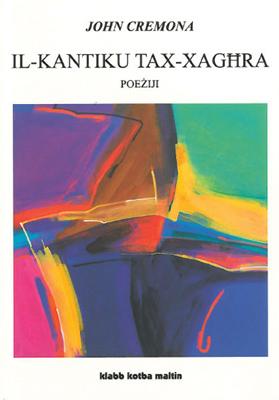 John Cremona’s latest book of poems is, as usual with him, a feast of pure, unadulterated poetry. This is poetry that can withstand the strictest critical tests of Francesco De Sanctis, Benedetto Croce, Francesco Flora, Frank Raymond Leavis and our own Oliver Friggieri. More than further discovery, it is abundant manifestation of the frequent and felicitous visitations of the Muse.

Cremona is known as a jurist: scholar, lawyer, drafter of legislation, judge; a professor of Constitutional Law, the man who fashioned our Constitution, and was successively attorney general, president of the Court of Appeal and our judge at the Strasbourg European Court of Human Rights.

Jurists are necessary, and law indispensable, but there is nothing more essentially prosaic than law-making; however, it does not necessarily follow that legisprudence drives out poetry. Cremona was a poet before he read law, and has consistently returned to poetry all through the long years of illustrious service in the field of law.

Il-Kantiku tax-Xagħra is a return to the poet’s roots. The poet was born in the Gozitan village, and the title is no mere accident. Cremona is savouring the language he heard during his childhood as well as the things closest to him and to his memories. He first expressed his poetry in his youth, immediately before World War II, when studying in Rome and tasting the camaraderie of the artists and poets of the Via Margutta.

There is considerable art and mastery of language, but there is also deep poignant lyricism

Italian was the language, and readers who will find time to refer to his contributions in Nuovi Scrittori e Poeti di Malta (1935) and his collection Eliotropi (1937) will realise how wonderfully he wrought that language in the then current poetic idiom. Even then, as now, Cremona was very native, with memories of Casal Caccia and Żabbar, where he spent his later childhood, but also very stunningly modern.

During the war, he discovered the great new poetry in the English language, produced by the generation that followed T.S. Eliot and Ezra Pound. So again in the long years that followed, he came out with English poetry in the contemporary idiom, as we discovered in his Songbook of the South. For some years, though the language was English and the message universal, the poet’s voice remained unequivocally that of the south of Europe.

Then the poet, always bent on renewing himself, resorted to a change of instrument, and in the past few years the mature wordsmith has given us a stream of lyrics which exploit the evocative as well as musical possibilities of our native language once the rigid strictures of semiticism have been loosened.

There is considerable art and mastery of language, but there is also deep, poignant lyricism in the poems dedicated to the love of his life, whose loss plucks the most somber strings of his lyre.

Cremona, like Horace, is a poet’s poet. The felicity of his phrase and verse is really remarkable. The choice of every word for its poetic and emotional value is unerrantly precise.

There is nothing extraordinary in Maltese poets writing in more than one language. Dun Karm Psaila himself wrote beautiful poetry in Italian and reserved his best for Maltese, while many others inversely wrote their best in Italian. Some preferred English.

Neither is Cremona unique in embracing law without aban­doning poetry; my own father was likewise, ġurista, poeta, patrijott.

To my mind what is exceptional about Cremona is his consistent level of excellence, the copious continuity of his poetic expression, the pathos and depth of his expression of the human experience.

What comes out of this fons bandusiæ is not only crystal clear. It is also, most of the time, existentially significant.