La Clemenza di Tito was performed in Malta for the first time as part of the Manoel Theatre/BOV Performing Arts Festival.Review by Albert Storace. 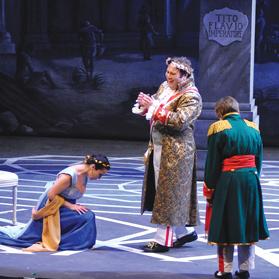 David Hansen took on the role of Sesto.

There are certainly far more popular Mozart operas than La Clemenza di Tito. But a joint dream of Denise Mulholland’s and Kenneth Zammit Tabona’s resulted in four performances of this hitherto unperformed Mozart opera at the Manoel Theatre.

The opera featured two casts sharing alternate performances as part of the Manoel Theatre/BOV Performing Arts Festival. The opera was performed in memory of the late Cavaliere Alfredo Spiteri Mallia, a much-loved personality, great opera buff and for many years intimately associated with the Manoel Theatre.

Unfortunately, Mulholland ended up not taking part in the project due to family bereavement – her ideas were, however, interpreted in Harry Fehr’s stage direction. Kenneth Zammit Tabona was artistic director and created the sets and the colourful costume design. The production shifts the plot from ancient Rome to somewhere in the 1790s, and the set is directly influenced by Piranesi’s famous Roman etchings.

Mozart composed this politically highly-charged opera to an early libretto by Metastasio that was re-worked by Mazzolà. By this time, Italian opera seria complete with castrati in heroic roles was on the way out.

The message in the opera is strong, irrespective of how aware Mozart was of the Bohemian political intrigue behind the commission. Mozart’s job was to present the Emperor Titus as a magnanimous hero to reflect upon and complement Emperor Leopold II, who was newly-crowned as King of Bohemia.

And here comes the crux. Because to some, this clemenza, given the harsh reality of Roman politics, could easily degenerate into scemenza. More than the usual double dose of suspension of credibility is needed with this kind of opera seria.

Fortunately, the music is splendid and holds everything together; it was very ably projected by the Malta Philharmonic Orchestra under the experienced direction of Damiano Binetti. The score includes some very beautiful set pieces which deserve more frequent hearings until Tito could become another veritable juke box of arias and duets like Figaro.

There were two strong casts which featured foreign and local singers. Although I ended up following both, my brief was to review the opening performance, which was headed by tenor Peter Davoren in the title role. Vocally very sound, he sang with a beautiful timbre which very often added pathos to his interpretation torn as he is between the need to uphold the law, the hurt at betrayal and the good nature of a man which reduces him almost to the level of utter naïveté.

Vitellia, interpreted by soprano Andriana Yordanova, is the evil genius of the work. Ambitious, vengeful, seductive and very mani-pulative, she certainly used her voice excellently, reflecting each changing mood in her strategy to reach her aim. Her pawn in all this is the young patrician Sesto, in another memorable performance by counter tenor David Hansen, who caused such a stir in a recital at the Manoel in last year’s Baroquefest. He is besotted with Vitellia and succumbs to her wiles, much to his own later disgrace and remorse, which he very effectively projected.

Vitellia and Sesto made quite a pair with their superb vocal agility and powerful confrontation scenes alternating passion, disdain, diffidence and anger in duets or solos.

The other characters sang and acted out their part well. Mezzo soprano Clare Ghigo’s Annio, a breeches role, had to be doubly convincing to succeed and this she did at all levels.

Soprano Gabrielle Costa’s Servilia showed a gentler side as a character; bass Albert Buttigieg’s Publio (head of the Praetorian Guard, by the time of Titus the definite king-makers in Rome), performed his part with convincing authority and gravitas.

The production moved slickly, complete with the chorus which seems to have been purposely meant to appear rather stylised and stiff. Yet, there was movement with agility and precision that were admirable.

The choral parts sounded much better in the more restrained parts and some of the stronger ones. In the acclamation scenes, more polish was needed as individual male voices could be heard.

Regarding the female section, either more decisive singing was needed, or else there was a need for more singers to be engaged. Perhaps for purely stage considerations, having equally-numbered sections works well because they can all be set in couples.