Throughout history, the most popular materials that have been used to make the matrix have been wood, copper, steel and stone. However, prints made from stone generally do not involve engraving and are more accurately described as lithographs. These involve a printing process based on the repulsion of water by tallow, wax or oil based materials with which the stone matrix would have been treated.

Probably originating as an art form by gold and silversmiths as a method with which to record their designs, printmaking has been in existence since the 15th century during which several engravers of note, such as Mair von Landshut, had already established themselves. 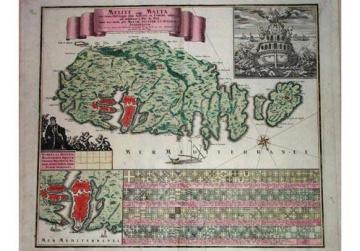 The Maltese Islands were first captured in this way by Hadji Ahmed Muhiddin Piri, more commonly known as Piri Reis. An Ottoman privateer who rose to the rank of admiral, Piri Reis published the Kitab-ı Bahriye, containing representations of islands or stretches of coastline in 1521 and 1525. Since then, many fine examples of printed maps and views of Malta have been created.

Original rare Malta prints represent an undervalued art form with prices ranging from as little as €100 for an original engraving that is guaranteed to be more than 100 years old to several thousands for rarer items. All however provide a unique historical record of the Maltese Islands and one that has not only consistently retained its value but also provides an enjoyable and decorative point of reference. Any experienced antique dealer will be more than happy to advise and certify in writing the authenticity of any acquisition.