Queen Elizabeth II and Prince Philip, Duke of Edinburgh, accompanied by their son Charles, Prince of Wales, and his wife Camilla, Duchess of Cornwall, will be visiting Malta for the Commonwealth Heads of Government Meeting, scheduled to be held from November 27 to 29. In this two-part feature, Michael Galea looks back at the Queen’s previous visits to Malta.

On February 6, 1952, King George VI died, aged 56. He was succeeded by his daughter, who was crowned Queen Elizabeth 11 on June 2, 1953, at Westminster Abbey. Later that year the Queen and her husband Prince Philip, the Duke of Edinburgh, started an extensive tour of the Commonwealth. 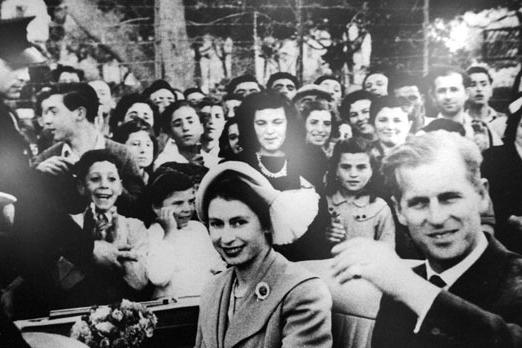 The royal couple being greeted by crowds while touring the island.

The last part of that world tour included Malta – a visit eagerly awaited by the people of these islands. The visit was deepened by the close ties of happy memories for the Queen for it was here that she had spent several months between 1949 and 1951 as a naval wife.

These previous visits were mainly of a private nature.

On November 20, 1949 – the second wedding anniversary of Princess Elizabeth and the Duke of Edinburgh – the young princess flew to Malta to join her husband who was then serving in the Mediterranean Fleet.

She spent her first Christmas on the island and lived at Villa Guardamangia, Pietà, with the Earl and Countess Mountbatten of Burma, Prince Philip’s uncle and aunt.

The Princess visited Mdina Cathedral and lunched with Archbishop Michael Gonzi, who was to remain a personal friend of the Royal couple.

Though among the smallest in size, Malta takes an honoured place among the countries we have visited- Queen Elizabeth in 1954

The princess toured the Dockyard, which her father, King George VI, had toured during his wartime visit to Malta in June 1943.

The War Memorial in Floriana commemorating the Maltese who lost their lives in World War I, was unveiled in 1938, but on December 8, 1949, Princess Elizabeth unveiled the tablets replacing the original panels at the base of the memorial to commemorate the dead of the two world wars.

She soon returned for her second visit to the island. She arrived on March 28, 1950, staying first at San Anton Palace with Sir Gerald and Lady Creasy, and later moving to Villa Guardamangia with the Earl and Countess Mountbatten.

Queen Elizabeth and Prince Philip are given an enthusiastic welcome by children on the Floriana Granaries during their visit to Malta in 1954 as part of their world tour of the Commonwealth. 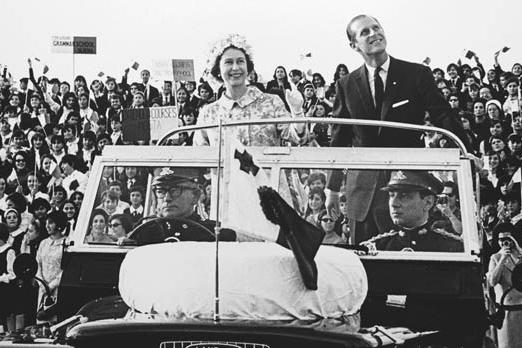 In 1942, King George VI had ass­um­ed the colonelcy-in-chief of the Royal Malta Artillery, and on the occasion of the eight anniversary of this bestowal Princess Elizabeth graciously consented to take the annual ceremonial parade in Floriana on April 3, 1950.

The Princess celebrated her 24th birthday on April 21 in Malta. She returned to England on May 9, 1950.

The next visit to Malta of the Princess was to be the longest – from November 25, 1950, to February 12, 1951. The Princess and the Duke again spent Christmas in Malta. At a reception given for the Royal couple at the Auberge d’Aragon, Prime Minister George Borg Olivier presented a bronze replica of Antonio Sciortino’s sculpture Les Gavroches to the princess. She returned to England on February 12, 1951.

Queen Elizabeth inspects a guard of honour at the unveiling of the Memorial to the Air Forces of the Commonwealth in Floriana in 1954.

Monday, May 3, 1954, was a perfect Mediterranean morning, with a blue sea reflecting the blue sky as the Royal Yacht Britannia entered Grand Harbour, escorted by Royal Navy warships as sirens blared and brass bands played. A 21-gun royal salute roared throughout the harbour.

At the Governor’s Palace, Prime Minister George Borg Olivier, in his address of welcome to the recently crowned Queen and the Duke of Edinburgh, said: “Today you come to us as our beloved Sovereign whose coronation not long ago was celebrated with great rejoicing by the inhabitants of all towns and villages – so well known to Your Majesty – of this small but important member of the British Commonwealth of nations.”

The Queen, accompanied by Prime Minister George Borg Olivier, at a reception given in her honour at Auberge d’Aragon, Valletta, during her 1954 visit.

In her reply the Queen said that “though among the smallest in size, Malta takes an honoured place among the countries we have visited. Indeed, throughout all the nations of the Commonwealth and of the whole world, the memory of her heroic stand during the war is still fresh.”

A most significant and moving ceremony of the royal visit was the unveiling of the Memorial to the Air Forces of the Commonwealth in Floriana. The memorial commemorates those who fell in action during the war while flying from bases in Australia, Italy, Sicily, islands of the Adriatic and the Mediterranean, Malta, Tunis, Algeria, Mo­rocco, West Africa, Jugoslavia and Gibraltar.

The Princess speaking to a woman dressed in a traditional Maltese headdress (għonella).

The ceremony was attended by some 500 relatives from all parts of the Commonwealth of airmen whose names are commemorated on the plaques which surround the circular base of the 50-foot-high column of travertine marble, and surmounted by a glided bronze eagle.

The programme of the royal visit included an enthusiastic welcome by some 16,000 children waving flags, cheering and singing on the Floriana Granaries. A choir of 600 children from various schools sang a Song of Welcome to the Queen and Prince Philip.

The royal couple’s social engagements included a reception given by the Prime Minister at the Auberge d’Aragon, Valletta, and a ball at the Palace hosted by the Governor, Sir Gerald and Lady Creasy.

Things have changed since I was here last, and this time it is my particular pleasure to be here as Queen of Malta- Queen Elizabeth in 1967

On the last day of that visit (May 7), the Britannia left Grand Harbour for Gozo, “where another amazing demonstration of affectionate loyalty awaited her Majesty” (Times of Malta, May 8, 1954).

Bishop of Gozo, Mgr Joseph Pace, in his address of welcome, remarked that “the island of Gozo has never had the supreme honour of a visit from a reigning monarch”. The climax of the Queen’s visit to Gozo was the unveiling of the War Memorial in Victoria, which represents the figure of Christ the King. 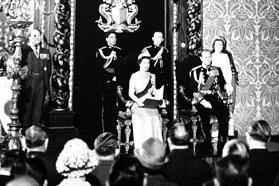 The Queen delivering the speech from the throne at the State opening of Parliament at the Palace, Valletta, in 1967.

A large crowd was at Mġarr harbour to bid a final farewell to the royal couple. Fireworks were let off from Fort Chambray and Qala, lighting the night sky in a brilliant kaleidoscope of colours.

Britainnia then sailed for Gibraltar.

The visit of Queen Elizabeth to Malta in 1967 – her second State visit as a Queen – was another landmark in the island’s history, as this was the first time independent Malta welcomed the Queen. Indeed, the aircraft left London flying the British monarch’s flag but landed on the island flying Malta’s colours.

The attachment of the Maltese to the Royal Family was evident in their warm welcome to the Queen, whose sojourns in Malta as Princess Elizabeth, while she was heir apparent to the throne, had endeared her so much to the people.

Since the Queen’s visit to Malta during her Commonwealth tour in 1954, the country had passed through arduous days, which culminated in the attainment of independence on September 21, 1964. The 1967 State visit to Malta carried with it the underlying significance that Malta had accepted a monarchical form of government: Malta welcomed her Sovereign.

The Queen delivering a speech at a State banquet in her honour at the Palace, Valletta, during her 1967 visit.

The Queen and Prince Philip arrived on November 14, 1967. Valletta was en fête, and Palace Square, roofs, balconies and windows were crowded as the Queen of Malta drove in State through Kingsway to the Palace. In reply to an address of welcome by the Prime Minister Borg Olivier, the Queen said: “Things have changed since I was here last, and this time it is my particular pleasure to be here as Queen of Malta.”

Highlights in the programme in­cluded the State opening of Parliament by the Queen of Malta – an historic ‘first’ – the presentation of new colours to the 1st Battalion King’s Own Malta Regiment, a children’s rally at Independence Arena, Floriana, a tour of St John’s Co-Cathedral, a Royal appearance at Manoel Theatre for part of a special performance by Maltese artists and musicians, a visit to the new University of Malta campus at Msida, the presentation of banners to the King’s Own Band Club and La Valette Band Club and the laying of the foundation stone of the new hospital in Gozo. 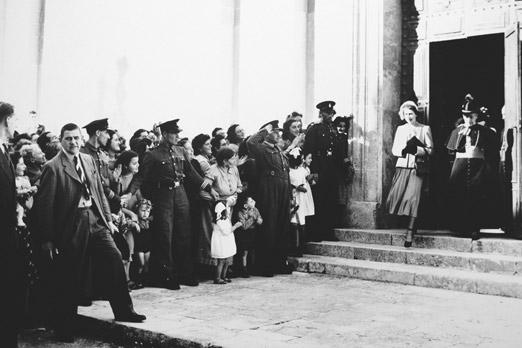 Princess Elizabeth leaving the Mdina Cathedral after a visit in 1949, accompanied by Archbishop Michael Gonzi.

At the end of that visit on November 17, 1967, Her Majesty sent a message to Governor-General Sir Maurice Dorman: “It has been a moving experience for us to revisit Malta and Gozo, and we have greatly valued the opportunity of seeing at first hand something of the difficulties and possibilities which the future hold for you. ...I send my heartfelt good wishes for the happiness and prosperity of all my people in Malta and Gozo.”

Thanks to the British High Commission and the Department of Information for providing the photographs.