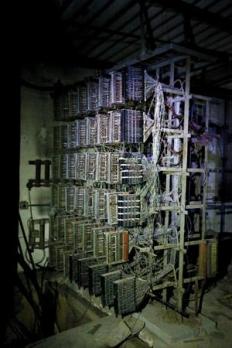 Two broken wooden luggage trolleys, which carted along the belongings of railway users in the 1880s, lie abandoned in the underground Floriana tunnel that was yesterday opened for public viewing.

The derelict trolleys are a reminder of the “sorry state” of the old railway, part of Malta’s transport heritage, according to long-time railway researcher Paul Galea.

The tunnel was available for public viewing yesterday as part of an open day organised by the Floriana local council.

“Many people turned up to see the underground railway… many told me that it was a shame that we allowed tourists to see the mess it was in.

“The idea of the open day is to raise awareness of the state it is in. This is our heritage,” he said.

The tunnel, under St Philip Gardens in Floriana, was first opened last year. It had been closed for commuters on March 31, 1931.

This Victorian railway station formed part of a 900-metre-long tunnel that runs from the erstwhile Yellow Garage beneath Valletta’s City Gate up to the Pinetum, next to Portes des Bombes.

Today there is only debris and the remnants of the two luggage trolleys in the tunnel. The railway tracks and the train itself were dismantled and sold as scrap. Today, instead of the train, cables run through the tunnel.

The tunnel was only one of the attractions of yesterday’s open day when the 15 public gardens in Floriana were accessible for the public to enjoy.

Throughout the day people browsed through the gardens, museums, historical sites and buildings. Among the attractions were original documents of the Knights, kept at the Capuchin Friars Library, mummified friars in the same convent and Emvin Cremon’s original panels forming part of the tribune erected for the Pauline Centenary celebrations held in 1960.