Karim Benzema came off the bench to score 13 minutes from time and give holders Real Madrid a patchy 2-1 win at resilient Ludogorets in their Champions League Group B match at the Vasil Levski stadium yesterday.

At the Calderon, Atletico Madrid reignited their campaign when Arda Turan struck 15 minutes from time to give last season’s beaten finalists a 1-0 win at home to Juventus in Group A.

Arsenal also ignited their Champions League hopes with a 4-1 thrashing of a feeble Galatasaray side with Danny Welbeck grabbing a hat-trick in a largely one-sided Group D clash in north London.

However, Swiss champions FC Basel claimed another English Premier League scalp when they deservedly beat a sloppy Liverpool 1-0 with a Marco Streller goal.

Cristiano Ronaldo had a penalty saved by Vladislav Stoyanov but he made no mistake when handed another chance to score from the spot 15 minutes later, netting his 69th Champions League goal.

Real moved on to six points from two games when Benzema finished off a precise left-wing cross by Marcelo.

Beaten 3-2 at Olympiakos Piraeus in their opening game two weeks ago, Atletico hassled and harried the Italian champions and were rewarded in the 75th minute when Turkey midfielder Arda poked the ball into the net from close range.

Neither side created many chances in an intense encounter and the victory puts Atletico firmly back on track to qualify from a group that also includes Malmo.

The Swedish side won 2-0 at home to Olympiakos to leave all four teams on three points from two matches.

The Atletico fans unveiled a banner reading “Feared in Europe” shortly before kick-off and the home players went after Juventus from the start, deploying the high-intensity pressing game that served them so well last season.

Juventus came close to a late equaliser when Atletico captain Raul Garcia almost turned a Stephan Lichtsteiner cross into his own net.

Galatasaray had never won in nine previous visits to England, and once Welbeck had punished them twice in the first half-hour their resistance crumbled, with Alexis Sanchez ending the match as a contest with Arsenal’s third goal before half-time. 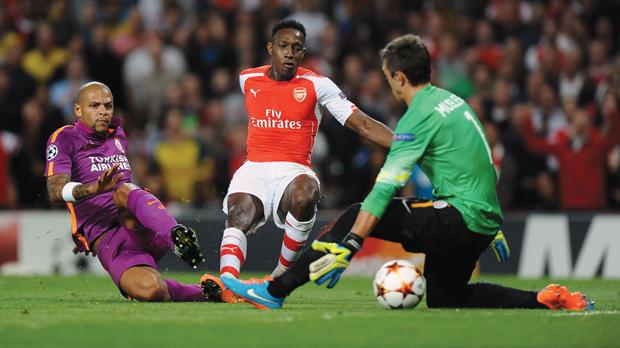 Welbeck completed his hat-trick shortly after the break and the only blot on Arsenal’s copybook was a needless red card for goalkeeper Wojciech Szczesny who rashly brought down Burak Yilmaz, who tucked away the resulting spot-kick.

After their opening-night loss to Borussia Dortmund, victory lifted Arsenal into second place behind the German club who beat Anderlecht 3-0 away from home last night.

Basel captain Streller turned the ball in from close range after goalkeeper Simon Mignolet saved a goal-bound header seven minutes into the second half as the Swiss team pulled off another European upset.

Basel, who bounced back from a 5-1 mauling by Real in their opening game, have previously beaten Chelsea and Manchester United in the Champions League in the last four seasons and knocked Tottenham Hotspur out of the Europa League.

Liverpool, who began Group B with a home win over Ludogorets Razgrad, gave Basel goalkeeper Tomas Vaclik very little to do and Raheem Sterling fluffed their best chance in the 75th minute when Adam Lallana sent him clear but he hesitated too long and was dispossessed.