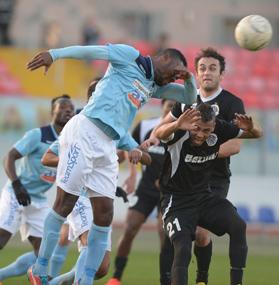 The heat was on for Hibernians and Sliema Wanderers yesterday.

With leaders Birkirkara and second-placed Valletta both winning convincingly on Saturday, Hibs and Sliema could scarcely afford to drop points from their clash in order to trim the erstwhile yawning gap on the front-runners.

A slow-burning encounter erupted in the second half but the heat of the battle proved too much for Hibs who were let down by two of their most important elements.

With the rejuvenated Wanderers 2-1 up and in ascendancy after Hibs had taken an early lead, tempers became frayed following a melee involving several players in midfield.

The tension got the better of the Hibs players, particularly Malta U-21 midfielder Bjorn Kristensen, who was shown a straight red card, and, moments later, Malta winger Clayton Failla whose repeated attempts to confront referee Sandro Spiteri will surely land him in hot water with the MFA Disciplinary Commissioner.

The dismissal of Kristensen and Failla all but ended Hibs’ hopes of avoiding a third defeat in the last four matches but while the red-card episodes and Failla’s shenanigans dominated the discussion after the game, Sliema certainly deserve credit for turning the game around with a brisk second-half performance that had its roots in coach Alfonso Greco’s decision to push Matias Muchardi in midfield after the Argentine had started at left-back as well as a lively display by Admir Vladavic and the scoring instincts of Stanley Ohawuchi.

While Hibs are in a freefall after taking only three points from their last four outings, Sliema have now closed the gap on the third-placed Paolites to four points.

The only change in Sliema’s line-up from their creditable draw with Valletta was enforced upon coach Alfonso Greco by the suspension of defender Stefano Bianciardi.

Greco indulged in some positional tinkering as Bianciardi’s place in the first XI was taken by a forward Abubakar Bello-Osagie, while Alex Muscat moved to centre-back and Muchardi dropped to left-back.

Ohawuchi took up his usual position at the heart of Sliema’s attack after returning from a trial with Albanian club KF Kukes.

Jean Paul Farrugia earned a rare start as he deputised for the injured Andrew Cohen.

Keen to minimise the disruptive effect the departure of Rodolfo Soares and Marcelo Dias has had on his defensive set-up, Hibs coach Branko Nisevic reverted to a four-man defence with Ryan Camilleri and Matthew Bartolo on the flanks and Zoran Levnaic and Jonathan Pearson in the centre.

Hibs were set out in a 4-1-4-1 configuration with Obinna Obiefule leading their attack.

It took the Paolites less than a minute to win their first corner and Failla’s inswinger was headed away by Bello-Osagie.

The early exchanges offered little in the way of creative football as both teams struggled for fluency.

Vladavic, operating in an advanced midfield role in his second appearance for the Wanderers, created his team’s first chance after 11 minutes.

The Bosnian turned well before guiding a throughball to Ohawuchi whose low strike was easily saved by goalkeeper Mario Muscat.

Muscat’s next intervention was more difficult as Trevor Cilia’s speculative cross-shot soared dangerously towards goal but the Hibs goalkeeper managed to tip the ball over the bar.

In their next raid, on 18 minutes, Hibs drew first blood.

Sliema were found wanting at the back as Farrugia’s pass reached Obiefule who darted past the static Blues defenders and on-rushing Henry Bonello before sidefooting the ball into the net.

Obiefule’s well-taken goal stunned Sliema who took a while to regain composure.

The Blues squandered a gilt-edged chance to equalise on 28 minutes. It came after a long move as Vladavic, bursting clear on the left, delivered a cross-shot that dropped to Ohawuchi at the far post. The Nigerian’s subsequent cross was headed down by Mark Scerri with the ball falling to Vladavic at the far post but the midfielder scuffed his shot high and wide from an inviting position.

A potentially menacing drive by Cilia was deflected just wide of the near post as the Blues ramped up the pressure.

At the other end, Failla’s set-piece cross sailed into the area where Farrugia rose highest but his downward header was blocked by Bonello.

With Sliema outnumbered in the key midfield positions, Greco tried to rectify the situation by hauling off Cilia, a winger, for left-back Jacob Borg with Muchardi switching to the left of midfield.

The hitherto subdued Bello-Osagie engineered Sliema’s first notable move of the second half.

He advanced on the right before picking out Ohawuchi with a perfect pass but the latter made a hash of controlling the ball, allowing Muscat to dive at his feet and dispossess him.

Sliema’s hopes rose when, 13 minutes into the second half, they produced a flowing move that saw Vladavic releasing Bello-Osagie who flicked the ball towards the steaming John Mintoff. The Malta winger accelerated into the box but his progression was halted by Camilleri’s sliding challenge.

Referee Sandro Spiteri pointed to the spot and Vladavic’s drive just eluded Muscat who got a hand to the ball but failed to stop it from crossing the line.

Having been cautioned for his foul on Mintoff, Camilleri was walking on a tightrope when he tripped Bello-Osagie deep in his own half but the referee this time issued a verbal caution to the defender despite the Wanderers’ protests.

The frustration of the Sliema fans soon turned into joy as, 20 minutes into the second half, the Blues went 2-1 up. Bello-Osagie served Scerri who quickly released Ohawuchi with the Nigerian unleashing a pulverising shot from an acute angle that beat Muscat hands down.

Galvanised by their two-goal flourish, Sliema were now brimming with confidence.

With 18 minutes remaining, Hibs appealed for a penalty when Luis Edison went down after being challenged by Mintoff but Spiteri saw nothing wrong.

The referee then found himself surrounded by a crowd of pushing players after Vladavic appeared to have been fouled in the centre-circle. The situation got out of hand when Spiteri brandished the red card to dismiss the fuming Kristensen as his Hibs team-mates harangued the referee.

Kristensen was sent off for kicking at Vladavic in an off-the-ball incident.

Failla, who incurred a yellow card for confronting the referee, completely lost his cool and was duly sent off, leaving his team with nine men. The Malta international had to be restrained by Edison and club officials as he tried to approach the referee.

Sliema sought to make their numerical advantage count but Vladavic lifted his shot over the bar and Ohawuchi’s tap-in, from Mintoff’s pass, was ruled out for offside.

Despite being down to nine men, Hibs refused to give in.

They would have levelled but for a top-notch save from Bonello who smothered Jackson Lima’s pile-driver over the bar.

On the cusp of time, Gatt Baldac-chino was expelled after a second booking for a foul on Obiefule.

Bonello fisted away Lima’s cross from the ensuing free-kick but Hibs’ hopes were extinguished when Sliema added a third goal deep into stoppage time, Ohawuchi poking the ball home from close in after Muscat had partially saved Vladavic’s shot.