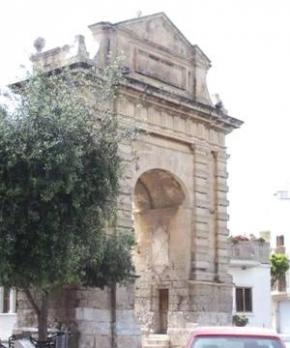 The de Rohan Gate marked the entrance to the village of Żebbuġ.

Emmanuel de Rohan de Polduc, the 70th Grand Master of the Order, accorded to Żebbuġ the title of Citta’ Rohan in 1777.

In return, the people of Żebbuġ were obliged to erect two triumphal arches to celebrate and commemorate this event.

However, a number of difficulties were encountered and plans for the construction of these arches were abandoned.

The villagers’ obligation was finally carried out almost two years after the death of the Grand Master.

However, only one arch was built in a fusion of Doric and Neo Classical design in 1798. The design is attributed to a local mason named Giuseppe Xerri.

The heavily rusticated Doric pillars are raised on a plain pedestal and the arch is capped by a triangular pediment with moulded edges.

According to Hughes et al. (2003 “The whole design is restrained and dignified in the Neo-classical style.”

The gate was scheduled by Mepa as a Grade 1 national monument as per Government Notice number 1082/09 in the Government Gazette in December, 2009.