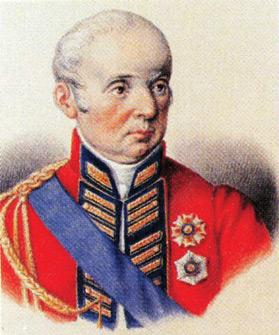 Sir Thomas Maitland, who was appointed Governor when the plague was raging in the Maltese islands.

The medical duties of the officers and men of the Malta Police have varied from time to time according to the requirements and the outbreaks of disease in the Maltese islands. Their first test came in 1813 when a disastrous plague epidemic struck Malta.

In those days it was believed that plague was spread through contact with infected people or by some specific objects. In conformity with these ideas, on May 21, 1813, the inspector general of police was ordered to make sure that hairs, pieces of paper, feathers and fragments of straw were removed by means of tongs or pincers so that they would not be touched by hand, thus avoiding the risk of infection to the handler.

On July 16, the police were instructed to ensure that no clothes were hung in windows or balconies as it was feared they could convey the ‘contagion’ as it was then called, to others.

The movement of the inhabitants and of domestic animals was restricted. Pigeons, birds and poultry were to be confined to their cages; dogs and cats were to be restrained to the owner’s home and not allowed to leave their houses and roam about in the streets. People disregarding these orders were to be placed under arrest. 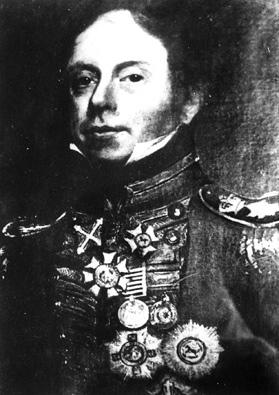 Francesco Rivarola, the head of police, whose task was to prevent the spread of the disease.

The following day, the inspector general of police issued rules concerning the strict observance of quarantine measures by the personnel under his command. These officers and men were charged with the supervision of the various barriers set up in the streets of the four cities (Valletta, Cospicua, Senglea and Vittoriosa) in order to restrict the movement of the population.

The police were also directed to see that the selling and buying of foodstuffs were limited to the hours between 6am and 10am, after which time they had to ascertain that all shops were closed.

As the plague persisted in Qormi, Birkirkara and Żebbuġ, the head of government ordered the inspector general of police to throw a sanitary cordon, or armed men, round the three villages to prevent their inhabitants from leaving under penalty of death. This order was speedily carried out on September 10, 1813, and the three villages were isolated from the rest of the island where the epidemic had shown signs of abating.

By November 13, the mortality rate was on the decline, and Sir Thomas Maitland, the Governor of Malta, ordered a general purification of all the houses and shops of Valletta and Floriana for a period of 15 days under the supervision of doctors and the police.

As the plague persisted in Qormi, Birkirkara and Żebbuġ, the government ordered the police to throw a sanitary cordon, or armed men, round the three villages to prevent inhabitants from leaving

A general pardon was proclaimed for those who, in spite of the public warnings issued when the outbreak was at its peak, had hidden objects liable to be infected.

This pardon was to become effective only if the culprits revealed the hiding places to the inspector general of police within 10 days in order to enable him to take the necessary steps for the depuration of the hidden objects.

Fearing a further wave of the disease in Valletta towards the end of the year, on December 24 the head of government made arrangements for the notification of any new cases of plague. Such announcements were to be made by the police, who were to go about the streets of the city accompanied by a bugler and a horn-player to warn the inhabitants to retire immediately inside their residences.

As an added precaution, Valletta was divided into 24 districts, and Floriana into seven districts, to confine, as much as possible, the spread of the disease to the particular district in which it would have broken out. Each district was placed under the supervision of a deputy of the inspector general of police who was aided by a police sergeant, a clerk and a nurse.

On January 3, 1814, a set of regulations were issued in the following terms:

1. The inspector general of police, who was responsible for enforcing these rules, received orders directly from the governor, and as head of the police of the whole island, he was empowered to issue orders and instructions as the circumstances of each case required.

2. Under him came the deputies of the districts, two adjutants for Valletta and one for Floriana.

3. The deputy of each district was to draw up an exact census of the population of his area and affix on the outside door of every house a list of the people residing inside. A copy of this list was to be updated every week and forwarded to the inspector general of police.

The deputy had to examine the inhabitants of these houses to see that they were in perfect health and to take care that the ‘sick searchers’ under him be constantly and unremittingly employed in inquiring into the health of the district. Moreover, regular reports had to be sent to the inspector general’s office every three days, when no case of sickness occurred.

In cases of sickness, a report had to be brought immediately to the knowledge of the head of police, who had to communicate the information to the proto-medico (chief government medical officer) who in turn had to ascertain the nature of the disease.

The deputy had also to ensure that the capi delle strade (captains of the streets) make similar visits and regularly report to him all occurrences.

4. The most important duty of the police sergeant was to ensure that the district was kept clean and that domestic refuse was taken for disposal to places set apart for the purpose by the inspector general of police. The police sergeant was also to pay frequent visits, in the company of the nurse, to the tenement houses, stores, basements and ground floor premises to make sure they were kept tidy and well ventilated.

On May 15, 1813, the death penalty was proclaimed for anyone knowingly concealing the existence of the disease on himself or on others. On August 1, this penalty was extended to those who changed residence without previous permission from the authorities, or entered infected premises, or hid any object or clothes likely to be contaminated.

Capital punishment was also applicable to personnel of the Sanitary Office, to civilian and military guards, and to members of the police force who hid or stole clothes and other articles or allowed others to do so even from places not suspected of harbouring the infection.

On the August 17, Anthony Borg was executed in Merchants Street, Valletta, for knowingly concealing the fact that he was suffering from the plague. Borg was the driver of the carriage of the Ospizio (a home for the aged and infirm at Floriana).

This enforcement of capital punishment so impressed the people that a short time afterwards, a low-ranking member of the police force shot himself when he discovered he was struck by the plague and had been concealing this for some days.

On March 13, 1814, Joseph Said from Xagħra, who was known to be infected with the plague, wandered out of his home while in a state of delirium from the disease and was shot dead by the adjutant of police.

The number of deaths resulting from the plague

Another man faced a firing squad on March 31 for having concealed the existence of the disease, while Pasquale Tobia was sentenced to 10 years’ imprisonment with hard labour for stealing objects from the Lazaretto Hospital. Tobia was later pardoned.

The police at Xagħra were shouldered with an unusual duty. On June 12, 1814, the surviving members of the families that had been stricken by the disease were taken to Ramla Bay and there made to bathe in the sea three times a day, under the supervision of the police, in order to disinfect themselves from any lingering traces of the disease.

On January 19, 1814, the general quarantine was lifted and the governor gave free pardon and general amnesty to all convicted people in Malta except those convicted for murder or other serious offences against the community at large.

On July 5, 1814, the islands were declared free from all plague . The number of deaths resulting from the plague was 4,668 in Malta and 96 in Gozo.