As morning mist rolls away, Stephen Bailey tries to look in every direction at once while on a safari trip in East Africa – but can he outstare a hungry lion? 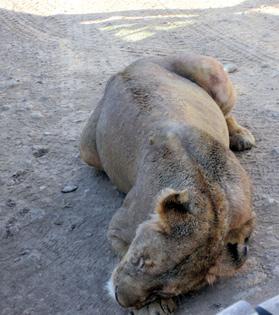 One sleepy lion took advantage of the shade created by the author’s vehicle.

A small herd of zebra stand on the rim, eying the camp with suspicion before descending into the abyss.

It’s cold and quiet, so I watch the procession from the comfort of my tent; three Maasai warriors carrying spears, a lone bull elephant and a group of fearful gazelle that jump at the sound of my friend’s snoring.

An hour later and I’m also descending through the mist, driving on to an inactive volcano floor that seems to confirm all my preconceptions about African safari.

Of course, I was expecting to see lots of animals.

On the plane I had watched a combination of Madagascar 2 and David Attenborough docu­mentaries, the subsequent sleep­less dreams making me believe that lions would be lurking on the airport runway.

They weren’t, although the Tanzanian border officials did their best to resemble the snarling hyenas from The Lion King.

My preconceptions were of a world where there was nothing but animals, where one 360-degree sweep of the eyes would reveal more wildlife than a night in with Walt Disney.

Baboons further excited me at the Ngorongoro Crater gate.

As I opened the window for a clearer photograph, one snarling primate jumped into the safari truck and surveyed the packed lunches.

Ignoring all cheap, perishable food, he stole a tube of Pringles and three Mars bars.

Descending along a perilous, rutted track we dip under the blanket of mist.

The safari truck jerks and groans, before straightening and taking us directly towards three hunting lions.

They hide behind trees, keeping their bodies close to the ground, but with the roar of our engine a lone impala senses something isn’t quite right and quickly skips away.

One lion gives me an unnerving stare, looking even more exasperated than I was after losing the Pringles.

Time is against them. A piercing red sun is burning through the mist, the whole crater floor now visible with one glance.

The lions struggle to hide and various lone grazers come together to form a defensive herd.

Two lionesses creep closer and then the herd stealthily moves the same distance.

Evidently thinking about his tip, my guide points out that this is an authentic hunting scene, although it doesn’t have the same excitement as the wildlife documentaries.

Nobody can hide in the short grass and I find it impossible to choose which way to look. Perhaps at the hyena that scurries past? No, not big enough.

I focus on the herd of buffalo, their impressive curled horns contradicted by comical ears that are bigger than curtains.

Now my friend is nudging me. How could I have missed that?

Uninhibitedly walking past the truck is a rhino. Great armoured skin gives it a prehistoric look, its eminent horn suggests power, but its sluggish loneliness confirms what my guide says: it’s an old male, one that’s lost its rights to the females.

Still, not everyone in the safari truck is looking the same way, and an excited shout from the guide turns me away from the mojo-less rhino.

A piercing red sun is burning through the mist, the whole crater floor now visible with one glance

It’s a leopard. And it’s dragging a carcass.

Judging by how the guide throws the truck into third gear, this is seemingly the pinnacle of safari spots.

We accelerate over, but the leopard has already vanished into the trees.

The guide raves about what we witnessed and points at the forest with his binoculars.

He slowly describes the leopard dragging the meal up a tree, although nobody else can find what he’s talking about. Judging by the number of safari trucks leaving the scene, my guide’s still thinking about his tip.

Over a long morning there is no end to the animal sights.

Hippos laze in the lake, occasionally rolling around the muddy embankment before returning to the water.

Elephants bulldoze their way through the forest, warthogs scamper along humorously, while a smorgasbord of different antelope species graze with a watchful eye.

But as the day continues there is an ugly predator on the prowl. Ngorongoro Crater is shockingly busy, roaring safari trucks dotting the crater floor and leaving trails of exhaust fumes.

Rules about not driving off the marked trails seem to universally ignored. Congregations of trucks attract even more trucks, every guide believing that the others must be there for a reason.

Now we’re queuing on the path. Queuing? This is supposed to be wilderness?

And we have no idea what we’re queuing for. Every five minutes one safari truck leaves and we inch our way closer.

It’s a pride of lions, lounging by the side of the path, indolent yawns revealing ferocious teeth.

As we hit the front our truck creates precious shade, and a lion decides to sleep beside the front wheel.

I’m leaning out, barely two metres from this wild predator, lost in a dreamy world. But a spluttering engine charges off the path and on to the grass, ignoring the queue and parking beside the lion.

Three posh-looking American tourists shriek with excitement as the lion wearily stands up and retreats to the trees.

Apparently there are government plans to halve the size of the Ngorongoro Crater conservation area, allowing for more upscale hotels to be built.

Yet despite the sheer concentration of wildlife, it already feels like there isn’t enough to go around. Primarily that’s because everyone is eager to see the same things, the big cats, elephants, and rhino.

But the immense visibility across the grass plains means that every sweep of the eye brings innumerable safari trucks.

But who am I to complain?

Ngorongoro Crater is unlike anywhere else in the world.

Before descending into the crater I was hoping to see everything. Within 30 minutes I’d seen more than I could ever have imagined.

This is the prime first-timers safari, an intimate natural experience that does not require major time or money investments.

I just hope it is able to cling to the remaining authenticity, and that five years from now, Ngorongoro isn’t just one step removed from a petting zoo.