The coal-fired power plant being promoted by a Norwegian company as the solution to Malta’s high tariffs and emissions would condemn the country to steep electricity prices for generations, an expert has warned.

A coal-fired power station costs twice as much as a gas-fired plant and creates double the quantity of carbon dioxide, according to chemical engineer Derek Lennon, who has built major plants in 26 countries.

Mr Lennon contacted The Sunday Times after reading about the proposal made by Norwegian company Sargas, which promised the “cleanest energy for the best price” if the government accepted its proposal to build a power plant that works on coal and biomass. The plan is to capture carbon dioxide in pressurised containers for eventual storage in depleted oil fields in the North Sea.

Sargas insisted power bills for consumers could be halved when compared with the prices currently paid for electricity generated by the Delimara plant and the eventual interconnector to Sicily.

But Mr Lennon said the Sargas proposal could never produce the lowest cost of electricity especially since getting rid of the pollutants from a coal plant was very costly and required a lot of energy.

“It is also not normally realised that an average 300MW coal-fired power plant emits around an average of 1.6 tonnes of radioactive uranium a year,” said Mr Lennon, adding that the controversial extension to the Delimara plant was less polluting than a coal-based power station.

Instead, he said Malta should start producing biodiesel as a spin off from power generation, a proposal which would cost an estimated €350 million (including the liquefied natural gas terminal) against Sargas’s estimated cost of €800m to €900m to build the plant.

The Norwegian company said it would recoup the investment through a power purchase agreement with Enemalta over a period of time.

But Mr Lennon said the government would do well to first consult with Drax, the largest coal and biomass power plant in the UK, which in 2010 proposed to build three new 300MW plants with carbon dioxide capture in North Sea depleted oil wells.

The British government offered Drax a subsidy, totalling a quarter of the subsidy offered on wind farms. Yet, even with this subsidy Drax said the plants were not economically viable and did not go ahead.

Another plant in north-east England received a subsidy of €175 million, which would be roughly equivalent to €450 from every inhabitant in Malta.

Should there be no government subsidy, the cost would almost certainly have to be recouped from electricity tariffs, said Mr Lennon, a Briton who recently moved to Malta.

The best solution for Malta is to build a separate power station to utilise all non-recyclable municipal waste, emulating countries like Finland and Norway.

The rest would be provided by a new natural gas plant with an efficiency of 40 per cent. The gas would be imported to an LNG terminal or via the proposed Malta to Sicily pipeline.

Mr Lennon said there were clear indications that in the next five years the US would not require substantial imports of natural gas. This had already depressed the natural gas price and would continue to maintain a downward price pressure in future.

Enormous effort is also being directed into the production of bio-fuels from algae, with the US and several EU states having substantial development programmes under way. All that is required is sunlight, carbon dioxide and water (even waste water). 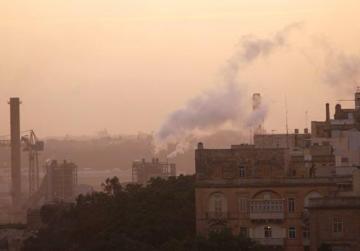 The carbon dioxide from a gas-fired power plant is substantially pure and could be used to generate bio-fuels for Malta by the algae process in a quantity dependent on the pond area available on non cultivable land.

“Ultimately, yes, I think there should be a new feasibility study to incorporate any studies the government has already made... and there is no substitute for a project team to visit actual plants,” said Mr Lennon.

*Sulphur dioxide can be reduced to a much lower level by burning low sulphur fuel oil rather than heavy fuel oil.