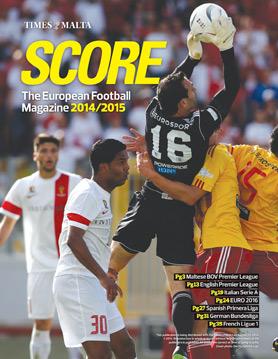 The 2014-15 edition of Score magazine will be distributed free with The Times of Malta tomorrow.

The 40-page publication, produced by the Sports Desk at Allied Newspapers, includes all fixtures for the new football season in Malta, Italy, England, Germany, Spain and France.

Another section is dedicated to the 2016 European Championship qualifiers.

Kevin Azzopardi has an extensive interview with Malta national team coach Pietro Ghedin who urges his players to show pride and courage ahead of a daunting Euro 2016 qualifying campaign, starting with a trip to Croatia next month.

Score is designed by Manuel Schembri, from the Allied News-papers Design Studio, and printed by Progress Press Limited.