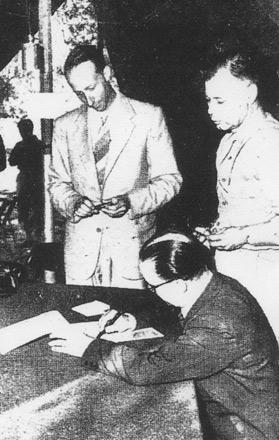 An almost unknown event of World War II was the secret second signing of the Italian armistice document on board HMS Nelson in Malta’s Grand Harbour on September 29, 1943. This event was the culmination of a series of negotiations that had began at Lisbon two months earlier.

Marshal Pietro Badoglio had replaced Benito Mussolini as Italian head of state on July 25, 1943. He officially announced that the war was to go on, but in secret he began attempts to extricate Italy from the conflict. On August 4, an Italian diplomat informed Ronald Campbell, the British ambassador in Lisbon, that Italy desired to opt out of the war, while on August 4 another Italian diplomat asked for peace terms from the British Consul General in Tangier, Morocco, Alvary Gascoigne.

On August 13, Gascoigne told the diplomat that Italy must first accept the principle of unconditional surrender, after which the peace terms would be divulged. Two days later, the Italian general Giuseppe Castellano informed Samuel Hoare, the British ambassador in Madrid, that Italy accepted the principle of unconditional surrender and asked for a meeting to discuss the issue of an armistice. The next day, Castellano passed on the same message to Campbell in Lisbon.

The rapid Italian response caught the Allies unprepared since only 11 military terms had been formulated as yet (by the military leaders in Algiers), while the political and financial terms were still being drafted (in London and Washington). It was decided to give the Italians what became known as the ‘Short Document of Armistice Terms’, which consisted of the 11 military terms as well as a 12th clause which said that political and financial terms would follow later.

Having made the Italians say ‘yes’ to the phrase ‘unconditional surrender’, this phrase was thereafter studiously avoided. General Dwight Eisenhower wanted to prevent delays caused by Italian haggling, since he wanted a signed armistice before the invasion of Italy, scheduled for September 9.

Eisenhower was ordered to obtain an Italian signature on the ‘short’ document but then, once the Italians signed, he was to give them the ‘long’ document. Eisenhower complained that this was ‘a crooked deal’. But he obeyed

On August 20, General Walter Bedell Smith, Eisenhower’s chief-of-staff, met Castellano in Lisbon and gave him the ‘short’ armistice document. Italy was given up to August 30 to decide whether to accept the terms. However, Castellano was delayed by the disorganised railway system and he did not arrive back in Rome until August 27. Meanwhile, having as yet heard nothing from Castellano, Badoglio sent General Giacomo Zanussi to Lisbon to find out. Zanussi’s arrival at Lisbon on August 26 caused some confusion until the facts were sorted out.

Eisenhower was dismayed at the harshness of the 30 terms and became apprehensive that they would delay Italian acceptance beyond September 9 (the scheduled date of the invasion). 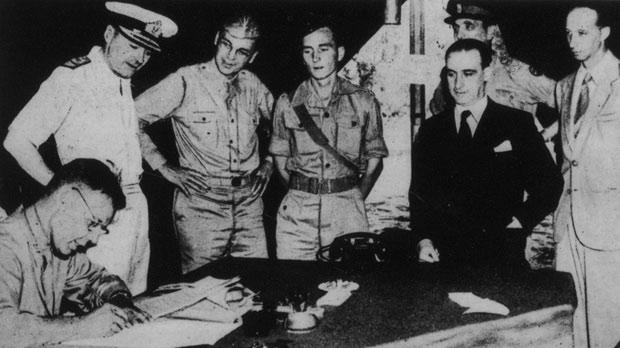 General Walter Bedell Smith signing, on behalf of the Allies, the Italian armistice at Cassibile, Sicily, as various US, British and Italian officials look on.

He therefore requested that the 30 terms would not be applied and negotiations would continue based only on the ‘short’ document. On August 27, Washington agreed to Eisenhower’s proposal but then London disagreed.

On August 30, Eisenhower was ordered to obtain an Italian signature on the ‘short’ document but then, once the Italians signed, he was to give them the ‘long’ document. Eisenhower complained that this was “a crooked deal”. But he obeyed.

On August 30, Rome accepted the peace terms, that is, the ‘short document’. At the time, the Italians did not realise clause 12’s importance. They assumed it referred to arrangements that would need to be made after Italy was liberated. The representatives of the Allies did not as yet explain to them that this assumption was erroneous.

On August 31, Castellano came to Cassibile in Sicily to finalise the negotiations with Bedell Smith. He tried to delay the announcement of the armistice until after the Allies had invaded Italy due to fears of German retribution, but Bedell Smith insisted on an announcement before the invasion. Bedell Smith, however, promised to inform Eisenhower of this Italian apprehension. Castellano returned to Rome.

The next day, on September 1, Eisenhower promised to send an American paratroop division to Rome immediately after the announcement of the armistice (Operation Giant 2), though the Italians had to seize four aerodromes near Rome where the aircraft that carried the paratroops would land. Encouraged by this promise, Rome accepted the peace terms (the ‘short document’) unchanged.

On September 2, Castellano returned to Cassibile but demurred at signing the document because, as he pointed out, it could be beyond Italy’s capability to carry out some of the armistice terms. Bedell Smith refused any considerations and gave the Italians 24 hours to accept the terms unchanged. Cushioned by the fact that their representative had pointed out that Italy might not be able to carry out some of the terms, Rome accepted to sign. 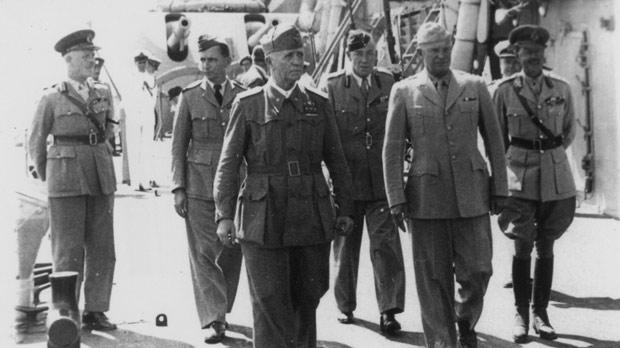 At 6.30pm on September 3, the armistice was signed at Cassibile by Bedell Smith and Castellano. It was agreed that the armistice would be announced simultaneously from Algiers and Rome in the evening before the invasion, this date would be divulged later to the Italians. After signing, the ‘short’ armistice, Castellano was presented with the ‘long’ armistice document. His vehement protests were to no avail.

On September 4, Castellano, who remained at Cassibile, sent the ‘long’ document to Rome through his assistant. The Italian leaders were perturbed at the 30 new terms, but since they had not been actually asked to sign anything they did nothing and acted as if this document did not exist. Anyway, Italian preoccupation at this time centred on the German troops that had set up temporary camp around Rome.

After the signatures, Eisenhower gave Badoglio a letter that included the sentences: ‘We also recognise that it is not at this time in the power of the Italian government to carry out certain of the terms. Failure to do so because of existing conditions will not be regarded as a breach of good faith on the part of Italy’

Late in the morning of September 8, the Italians were informed that the landing was due to take place that night. The Italians, who had been deliberately mislead into concluding that the invasion was to be on the 12th, had as yet done nothing about the seizure of the aerodromes. It was now too late for them to capture these aerodromes, so Eisenhower cancelled the paratroop operation.

Badoglio panicked and asked for a delay in the announcement of the armistice until after the invasion started. The insensitive Allies refused this concession. At 6.30pm on September 8, Eisenhower announced the armistice over the Algiers radio while Badoglio announced it over the Rome radio at 7.45pm.

With Rome surrounded by German troops, this was certainly the most courageous act by the old marshal in his life! The Italian army and airforce, bereft of orders, melted away, while most of the navy’s operational warships eventually ended up in Malta.

Most of Italy was seized by German troops through an operation named ACHSE, set in motion at 8pm by the German Commander-in-Chief General Albert Kesselring. The Allies landed at Salerno (Operation Avalanche) just before dawn on September 9. The Italian King, Victor Emmanuel III, and Badoglio escaped from Rome to Ortona on the Adriatic where they set up a ‘free’ government in Brindisi.

Since Italy had become a German-occupied country, Eisenhower pointed-out in mid-September that the 30 political and financial terms were beyond the capability of the Italian government to accomplish and suggested that these terms be relinquished. London eventually refused, and on September 25, Eisenhower was ordered to have the ‘long’ document signed, unchanged.

Bedell Smith met Badoglio on September 27 and 28 and informed him that after he had signed the ‘long’ document, Badoglio would be given a letter to confirm that Italy would be absolved from implementing any ‘impossible’ term. On this assurance, Badoglio accepted to sign.

Badoglio came to Malta on the cruiser Scipione and at 12.15pm on September 29 the ‘Long Document of Armistice Terms’ was signed on board the British battleship Nelson in Grand Harbour; Eisenhower signed for the Allies and Badoglio for Italy.

After the signatures, Eisenhower gave Badoglio a letter that included the sentences: “We also recognise that it is not at this time in the power of the Italian government to carry out certain of the terms. Failure to do so because of existing conditions will not be regarded as a breach of good faith on the part of Italy.” This signing was kept a secret and the meeting on Nelson was announced to be “about making the most effective Italian military effort against the common enemy”.

During a discussion Badoglio pro­tested that, having on September 3 accepted to sign an armistice document where the word ‘surrender’ had not been mentioned even once, he had now been presented with a document whose title was ‘Instrument of Surrender of Italy’ and whose opening sentence stated that the Italian armed forces had “hereby surrendered unconditionally”. Eisenhower promised to try and have the ‘surrender’ statements amended.

This Eisenhower promise had a rather bizarre sequel. Eisenhower’s request was accepted by Washington on October 8. Perhaps expecting the usual denial from London, and probably still feeling guilty about the trick played on the Italians on September 3, Eisenhower did not await London’s reply but immediately wrote to Badoglio informing him that the title of the ‘long’ document was to be altered to ‘Additional Conditions of the Armistice with Italy’, while the opening sentence, which mentioned “unconditional surrender”, was to be expunged. London rejected any alterations but the British rejection had come too late; Eisenhower’s letter had already reached Badoglio.

Meanwhile, London and Washington had also become unhappy about another letter in Badoglio’s possession. At that time it was expected that Rome would be liberated in a few days, while due to the chaotic situation in Italy, there were fears in Brindisi that when Rome was liberated, the Communists and Republicans would create a government in Rome in opposition to Badoglio’s government ‘marooned’ in Brindisi.

At this time, the representative of the Allies in Brindisi was a somewhat impetuous British general Noel Mason-MacFarlane. In order to allay Badoglio’s apprehension, Mason-MacFarlane, without informing his superiors, wrote a letter to Badoglio guaranteeing that the Allies would recognise only Badoglio’s government after the fall of Rome. There was alarm in London and Washington when it was discovered what Mason-MacFarlane had done. The situation in Italy was fluid, so there was no knowing which of the Italian factions would eventually come out on top, and the Allies did not want to continue backing a horse that had lost the race.

So, in mid-October, it was decided to try and retrieve the two offending letters, that of Eisenhower and the one of Mason-MacFarlane. The two diplomatic representatives at Eisenhower’s headquarters, one American and the other British, were sent to Brindisi to attempt to do this. They contrived to meet Badoglio alone in his office and asked him to hand over the two letters in order to correct some spelling mistakes. The unsuspecting Badoglio handed over Mason-MacFarlane’s letter and promised to give them Eisenhower’s letter later because it was in his room at his hotel.

Presumably on the principle that a bird in the hand is better than two in the bush, the two diplomats thereupon burnt Mason-MacFarlane’s letter. There was now no chance of obtaining Eisenhower’s letter and the ‘long’ document was officially amended on November 12, the protocol being dated November 9, 1943. The amended document was later published in London as wartime document no. 6,693.