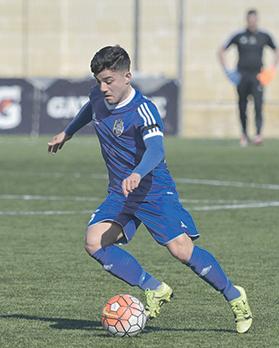 James Brincat will be playing for Birkirkara next season.

Birkirkara continued to bolster their squad in the off-season with the acquisition of James Brincat, from Mosta FC.

The 19-year-old attacking midfielder put pen to paper on a five-year contract yesterday and becomes the club’s second Maltese signing this summer after Shaun Bajada who returned to the Stripes’ fold after leading Għajnsielem to the Gozitan league title last season.

The capture of Brincat is a great coup for Birkirkara as he was one of the most talented youngsters in the 2015-16 Premier League campaign. He went on to play a key role in helping Mosta retain their top-flight status for another year.

“The signing of James Brincat is a clear sign of our club’s commitment towards attracting the best local talent,” Adrian Delia, president of Birkirkara FC, told Times of Malta.

“James becomes our second Maltese transfer signing this summer. We are now hoping to attract more similar talented players to our club.

“At the moment, Birkirkara are in talks with other transfer targets. We shall be away for the next couple of days for our second leg against FC Krasnodor but we should be in a better position to complete more signings on our return from Russia.”

Brincat, a Malta U-19 international, has already started training with the Stripes. Yesterday, he was included in Drazen Besek’s squad that will be heading east tonight even though he will not be eligible to play a part against FC Kras-nodar in the Europa League on Thursday.

Elsewhere, Justin Haber, currently on the books of Hibernians, is attracting the interest of Premier League side Balzan.

Sources have told Times of Malta that the Malta goalkeeper has already held talks with Balzan even though he seems more inclined in a return move to first-love Floriana.

Haber could lose his status as first-choice at Hibernians this season following the arrival of fellow national team goalkeeper Andrew Hogg from Kalloni in the Greece top division.

Contacted yesterday, Riccardo Gaucci, the Floriana FC president, was coy on his club’s interest in Haber and said the Greens’ priority at present was a top-notch striker.

“Talk about our interest on Haber has been going on for the past few weeks now but what I can say is that at our goalkeeping situation is settled here so we arelooking to strengthen other areas,” Gaucci said.

“The Haber transfer could happen but we’re still far from a deal. We’re engaged in talks with an Italian striker and we expect to wrap up that deal very soon.”

The 27-year-old joins the Greens with a remarkable CV, having enjoyed a five-year spell with Buenos Aires giants Boca Juniors between 2009 and 2014.

Ruiz has signed a one-year contract with an option for a second year.

At Floriana, he is likely to form a strong defensive partnership with Italian Enrico Pepe who also penned a one-year extension in this off-season.

Pepe, whose contract with Floriana was due to expire at the end of next season, is now set to remain at the club until 2018.

Last week, Floriana, now under the charge of Giovanni Tedesco, maintained their recruitment drive with the signing of Brazilian forward Gustavo Franco.

The 18-year-old follows Senegalese striker Amadou Samb, who is back at the club after playing for them in 2014-15, and wing-back Alex Cini who joined on loan from Mosta.