After their daughter Nicola was born with a congenital heart defect, Francesca and Michael Rizzo were told it would take a straightforward operation to correct. But Stephanie Fsadni learns the family’s heartache had only just begun... 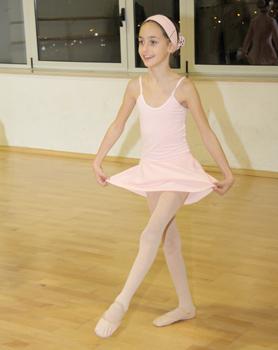 Nicola during a ballet class.

Ten-year-old Nicola Rizzo looks picture-perfect in her pink ballet outfit. And as she makes her dance moves, no one would realise how much she has struggled to balance on her left leg.

Two weeks after she was born, Nicola was diagnosed with an Atrial Septal Defect: a hole in the septum, or muscular wall that separates the heart’s two upper chambers.

This is a very common congenital condition, and small ASDs detected in the first few months of life often close spontaneously.

Nicola had quite a large hole – two centimetres – but doctors told her parents, Francesca and Michael, not to worry and that it could be corrected through laparoscopic or keyhole surgery.

However, the child had to wait until she was at least five years old to be able to undergo such an operation.

The girl grew up leading a normal life, except for the fact that her heart pumped at a faster rate and she would tire more easily than most of her peers after running or doing other physical activities.

“Sometimes, it would pump so fast, you could see it pump outside her rib cage,” Francesca explains.

“However, she was used to it from birth and coped well.”

When Nicola turned five, she was still underweight for surgery and the operation had to be postponed.

She was ready to undergo surgery at the age of seven but an unexpected event jolted the family: Nicola’s younger sister Alex, who was then five, was diagnosed with a nefro-blastoma (tumour in her kidney).

This threw all the Rizzos’ plans into disarray and Nicola’s operation had to be put on hold.

“We went to hospital, still feeling like we were riding on a roller-coaster, but hoping for the best,” recounts Francesca. 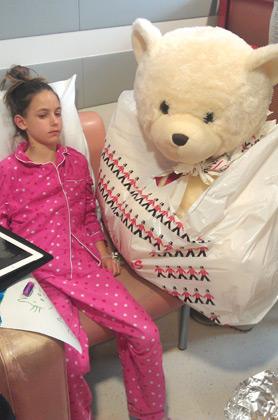 Nicola a day after surgery at the Great Ormond Street Hospital in London.

But the attempt to operate through laparoscopic surgery was not successful and the family was informed that Nicola would need to have open-heart surgery in the UK.

Nicola’s mother describes this period as a very miserable time.

“I felt a dark cloud over my head. I had already gone through a psychological trauma having to deal with cancer.

“This was another blow. I felt I was drowning, trying to come up for some air and something would push me down again.”

The family was put on the waiting list of the Great Ormond Street Hospital in London.

“We were waiting, waiting, waiting. We couldn’t plan anything and I like to plan… meanwhile, I was petrified of the open-heart surgery because in order to operate, they stop your heart for a short while,” says Francesca.

In April 2012, the Rizzos finally travelled to London, where they spent time at Francesca’s aunt’s before the operation – which was postponed by a week, so they took the children to Legoland and spent a happy Easter with family.

The day of the operation finally arrived and the surgery was deemed to be a success.

The family heaved a big sigh of relief… but they soon found out that their drama was not over.

Two days after surgery and after spending 48 hours in the Intensive Care Unit, Nicola was encouraged to get out of bed.

She complained that she felt her left side was numb and it was a big effort to move.

The neurosurgeon concluded that the girl had a pinched nerve. She was discharged even though she wasn’t stable and couldn’t walk properly.

“I was scared,” recalls Nicola, her blue eyes widening.

Francesca was not convinced it was just a pinched nerve and believed it was more serious than that.

Sometimes, her heart would go so fast, you could see it pump outside her rib cage

“I thought she had had a stroke. She couldn’t even crawl. Her leg was not responding to her brain.”

She asked a paediatrician if it could have been a stroke, but the child was improving every day, lowering suspicions of such an occurrence.

Yet, try as she might, Nicola was tripping over and falling and basically had to learn how to walk again. Walking up and down the stairs also became a feat.

So Francesca sent a video of her daughter after the surgery to her uncle, who is the family’s GP. He told her it might be what is called a Transient Ischemic Attack (TIA), which is a sort of “mini-stroke” but that causes very slight damage.

Once the family returned to Malta, he referred her to a paed-iatric neurosurgeon, who found Nicola to be quite well; however, after seeing video evidence of Nicola the previous week, she suggested an MRI.

The MRI confirmed Francesca’s suspicions: that Nicola had had a full-blown stroke during the operation that affected the left side of her body.

“I felt relieved, in the sense that I wasn’t going mad,” Francesca says. “I would urge mothers to follow their instincts in such circumstances… a mother’s instinct is almost always right.”

A family physiotherapist showed Nicola how to do a number of exercises, mainly to improve her balance, and her mother watched her every step.

“I gave my daughter a lot of tough love,” Francesca admits. “I was shouting at her to listen, think and connect, but I knew her character could take it.”

The girl says her sisters Alex and young Pippa were also very supportive during the whole ordeal.

Six weeks after the operation, Nicola was already better and was ready to return to school. A big welcome back awaited her.

“Classmates used to Skype me while I was in London, and when I returned, every class made a card,” says Nicola with a smile.

The girl loves school and in fact wants to become a teacher.

The most difficult part for her was to resume her favourite hobby, ballet, as she could not balance on her left leg.

She had to join her younger sisters’ class and they were doing better than her, which was quite demoralising for Nicola.

“But she was focused and she did better than her teacher expected of her,” her mother says proudly.

Just a year after surgery, Nicola can run, swim and dance for hours on end without tiring.

She has picked up ballet quickly and has recently got a distinction in her exam.

“She still has some difficulties, like hopping and galloping on one foot, but only I see it,” says a relieved Francesca, her own blue eyes shining.

And these minor issues will surely not hold Nicola back from dancing.