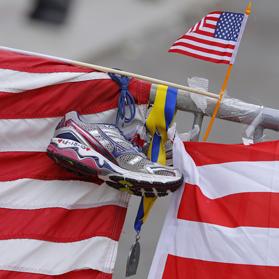 A running shoe with the date of the Boston Marathon bombings written on it, hangs beside a Boston Marathon medal and a small US flag at a makeshift memorial along Boylston Street in Boston, Massachusetts last Thursday. Photo: Reuters

The horrendous bombing at the Boston Marathon on Monday sent shock waves throughout America and was the worst on American soil since September 11, 2001.

The two bombs killed three people, including an eight-year old boy, and injured more than 170, some of them very seriously. The bomb caused brain injuries to the eight-year old’s mother while his six-year old sister lost her leg. Many other victims also suffered horrific injuries, including the loss of limbs. The two other fatalities were Krystle Campbell, 29, and Lu Lingzi, a postgraduate student from China.

The fact that the two devices were set off at a crowded event on Patriot’s Day – a holiday in Massachusetts which commemorates the first battles of the American Revolutionary War – suggests the aim was to gain maximum publicity, as well, of course, creating terror and mayhem.

The explosives used were packed with metal, ball bearings and nails and placed in a pressure cooker, which means they were deliberately designed to injure, maim and kill as many people as possible. Some observers have pointed out that similar bombs have been widely used in Afghanistan and the method for manufacturing such devices is available on the internet and on al-Qaeda propaganda websites.

Two Chechen brothers, Tamerlan Tsarnaev 26, and Dzhokhar Tsarnaev, 19, caught on film near the scene of the bomb attack, have been implicated in this attack.

The elder brother was killed in a shoot out with the police on Thursday night and the younger one escaped but was captured by the police on Friday night. The police began a search for the two on Thursday after a policeman was killed, by one of the suspects, at a university campus.

The two brothers are sons of Chechen refugees from the Caucasus region in southern Russia and moved to the US from the Russian Republic of Dagestan in 2001. Dzhokhar, 19, was a university student while Tamerlan, 26, was an amateur boxer.

Speaking at the White House on Monday, President Barack Obama vowed to bring those responsible for the bombing to justice, but warned against “jumping to conclusions based on incomplete information”.

He did not use the word “terrorism” in his first reaction but on Tuesday he made it clear that the attack was indeed being investigated as “an act of terrorism”.

The motive for this act of terrorism is still unknown. Could it be linked to al-Qaeda or an al-Qaeda affiliate, or was this a case two individuals acting alone? Were they inspired by al-Qaeda ideology? Contrary to what was initially suggested by some sections of the media, this does not seem like a case of domestic extreme right-wing terrorism. The FBI has made it clear, however, that “the range of suspects and motives remains wide open”.

Reports have pointed out that the elder Chechen brother was less well-adjusted to American life than his younger brother, and one wonders whether he influenced him to carry out this atrocious act, and whether he introduced him to the world of radical Muslim ideology.

Many questions will have to be asked and there will be much soul searching in the US going on. Were these two bombers acting alone? What drives two people, who have been in the US for over 10 years, who were lucky enough to enjoy the benefits of freedom in America, to commit such terrible acts? If they were drawn to radical Islam, what made this happen?

On the other hand, there should be no reason for panic or shooting from the hip. Last Tuesday, for example, Mitch McConnell, the Republican leader in the Senate, said the Boston bombs showed that “the complacency that prevailed before September 11 has returned”.

I doubt this is true. Security in the US remains as tight as ever, and the authorities have a good record of foiling terrorist plots, such as the Times Square car bomb in 2010. Unfortunately, sometimes people will be successful at carrying out terrorist attacks, such as the ones in Boston.

On the other hand, there is bound to be some debate on how domestic security can be improved upon and what lessons can be learnt from Boston.

While we grieve for the victims of the Boston bomb attacks, let us not forget those countries that are plagued by frequent bomb attacks such as Pakistan, Somalia, Afghanistan, Syria and Iraq.

Regretfully, the media often considers such atrocities to have little news value because they have become too frequent occurrences.

On Thursday, at least 27 people, including two children, were killed and dozens more injured in a suicide bomb attack on a cafe in Baghdad. Did this attack make the headlines? Sadly not.