All the publications of the early British rule in Malta are rare, very rare, or at times unique. One of these gives a short account of the Froberg mutiny at Fort Ricasoli which lasted nine days in April 1807. A copy is extant at the National Library.

Notwithstanding demands for the freedom of the press, and the Maltese Declaration of Rights of 1802, the situation remained the same as it was under the rule of the Order of St John. Censorship was absolute. The only publications came out of the official press, and one of these happened to cover this rather unusual event – a mutiny at Fort Ricasoli by a regiment stationed therein. Why and how this happened makes interesting reading and a novel was even written about it. 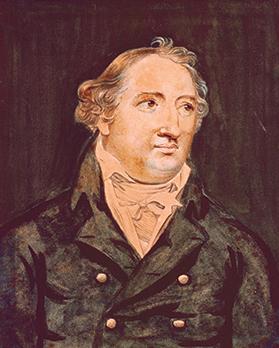 In the early 1800s the Malta garrison had been depleted because the Maltese Light Infantry, better known as I Cacciatori Maltesi, had reinforced the army in Sicily during the British occupation. Instead, the safety of the island, with its many French prisoners-of-war, depended considerably on mostly unreliable mercenary troops.

In 1806-1807, Fort Ricasoli was garrisoned by a motley group of foreign troops of various nationalities, including Germans, Albanians, Bulgarians and Greeks. The regiment had been raised by a French royalist crimp who styled himself as a German Count Froberg but his real name was Gustave de Montjoie. Several mercenaries he invited or pressed by dubious methods were a set of lawless desperados who stopped at nothing unless it suited their purpose.

True, many of them had been enticed to join up with guarantees of fat remuneration, and promises they found unfulfilled. On arrival in Malta, they harshly protested against their forced passage to the island and insisted that they be sent back to Corfu. The treatment meted out to them was not of the first order. Their commander was Major Schumelketel, but they were under the direct control of Lieutenant Schwartz, who had supervised the shameful recruitment process. 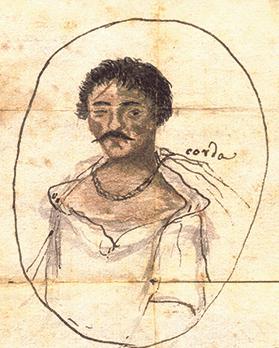 Portrait of the Greco-Bulgarian Caro Mitro, leader of the mutiny, hanged on April 26, 1807. (Courtesy of a private collector)

Matters came to a head on April 4, 1807. About 200 Greeks and Albanians rose in revolt. They killed Schwartz, their commander and his adjutant. The other officers were placed in cells. The British flag was replaced by the Russian colours, the drawbridge was taken up and the gates of the fort were closed. The mutiny was on.

Having taken complete control of the fort, the mutineers forced British gunners stationed in the fort to train their guns and mortars towards Valletta. They demanded their own discharge from the regiment, a return to their homes, money and a free pardon. The British troops inside the fort, with wives and children, were their hostages.

This was quite a delicate situation for the Officer Commanding the Troops in Malta, Lieutenant General William Anne Villettes (1755-1808). He was instantly aware that any attempt at trying to capture the fort would cost the lives of a great number of innocent people.

Besides, his anxiety was increased by the presence of about a thousand prisoners-of-war on the island. But he knew that there were provisions for only three days in the fort, and he therefore decided that the best policy was to starve out the mutineers. His reply to their demands was an outright refusal and an order for their immediate unconditional surrender.

Meanwhile, the fort was besieged by a large contingent of troops and all the ships and boats were moved away from it to the inner harbour. On April 5 all the guns of Fort St Angelo and the bastions of Valletta were trained on Ricasoli as an eventual extreme measure. The internal security of the island was left in the hands of civic guards of all the villages.

In the vain hope of regaining their freedom, the insurgents raised the white flag. When this did not work, they hoisted once more the British flag they had taken down. Emissaries were exchanged, but the negotiations failed. The mutineers persisted in their demands and threats, while Villettes reinforced his stance. Surprisingly, on the seventh day of the siege, the wives and children of the officers were released. They were out of danger of being killed, or dying through starvation.

On April 12, a good number of mutineers resorted to a stratagem. Practically all the soldiers inside the fort were allowed to leave, while the rebels who opened the gates for them went out with them hoping not to draw attention to themselves in the confusion that ensued, and, in any event, to pretend that by leaving the fort they disapproved of the conduct of their colleagues. The fort was surround by troops on all sides and the rebels were soon apprehended.

Twenty-four of the leaders were immediately condemned and executed on the Floriana parade ground, some by hanging, others by being shot. Those surviving were imprisoned. The end of the mutiny was in sight.

Meanwhile, a party led by Count de Clairmont, a lieutenant of the Froberg Regiment, had succeeded in scaling the walls with 40 of his soldiers. They made two prisoners and occupied important posts. But the final act came about on Sunday, April 12, at 9.30pm. The few rebels still inside the fort, with no hope of a free pardon, blew up the powder magazine, killing three British sentries. It was thought the rebels had committed suicide, but in actual fact they had managed to haul themselves down the bastions and escape to the countryside.

As was to be expected, this dramatic event with all its attending circumstances, caused consternation and alarm all over the island. In order to allay the fears of the inhabitants, the government published without delay a pamphlet of eight pages titled Rapporto di quanto è accaduto nel Forte Ricasoli dalli 4 fino alli 11 d’Aprile 1807. In this short account it was stated that the mutiny had been headed by a group of Bulgarians and Albanians, and that, in truth, the Froberg Regiment was made up of strong and courageous soldiers, and skilful in action.

The account was most probably written by Vittorio Barzoni (1767-1843), born in Lonato, province of Brescia, who came to Malta in 1804, publishing books and newspapers from the government press during the next six years.

At the end of the narration, there is a note of thanks to the Maltese, signed by Alexander Ball, the Civil Commissioner, and General Villettes, issued from the Palace on April 13, 1807. They expressed their intense satisfaction and admiration at the good conduct observed by the Maltese, praising their firmness when faced with such an occurrence.

The two signatories wanted to show their esteem and gratitude, and considered this event as further evidence of the affection shown by the Maltese nation towards the British government and its Sovereign who could appreciate the love and loyalty of his subjects.

It is to be noted that in this publication no mention was made of the fate of those who blew up the powder magazine, but it has been written that they were captured and imprisoned a few days later. A manuscript document, extant in a private collection in Italy, brings to life how their life was ended.

An oval grisly portrait lies at the head of the document. It is a coloured picture of the Greco-Bulgarian Caro Mitro. He is described in the accompanying text as the Moorish leader of the mutineers who rebelled in Fort Ricasoli and who, along with others, used ropes to escape from the fort, after which they caused damage while roaming the countryside.

It was only on April 25 or 26 that Mitro was captured together with an intimate friend of his, Nicola d’Anastasi, a Greek Catholic. They were discovered by the Maltese soldiers of Għargħur and Naxxar at ‘Calet Marcu’, next to Baħar-iċ-Cagħaq. They were hanged at 2.30pm on the same day. That is why the artist wrote ‘corda’ around Mitro’s uncovered neck. D’Anastasi was contrite, but the fearful Mitro was unrepentant. They were buried in a trench beneath the ‘Bastioni della Salnitriera’.

It was only two hours after the execution that the document was written, in Italian, and dated April 26, 1807. Was it written by a priest who was called for spiritual assistance? The document ends with the words ‘ad memoriam’.