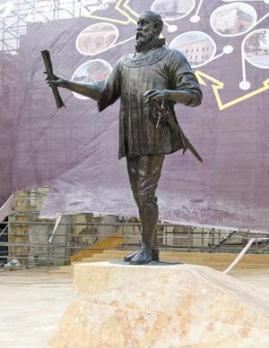 A researcher has invoked Malta’s “collective memory” to suggest that the Grand Master who founded Valletta should continue to be referred to as de La Valette and not de Valette.

For centuries, people have referred to the 49th Grand Master of the Order of Malta as Jean de La Valette and this cannot be ignored, despite archival evidence showing his name as de Valette, according to Francophile Charles Xuereb.

The veteran broadcaster is doing academic research about France in the Maltese collective mem-ory, analysing the perceptions and interpretation of the 1798 uprising and France’s place in the national memory.

Last year he was admitted to the French National Order of the Légion d’Honneur as Chevalier, nominated by then President Nicolas Sarkozy for his long and dedicated service to the dissemination of French culture.

The controversy on the correct spelling of the Grand Master’s name was brought up again in November during the unveiling of a monument in Valletta to the city’s founder.

During a speech, judge and researcher Giovanni Bonello stressed that the name was de Valette and not de La Valette. He later invited “anyone to find one single reference during the Grand Master’s lifetime when he referred to himself, or was referred to, as de La Valette or as La Valette”.

But this did not go down well with everyone and stirred nationwide debate.

On her third trip to Malta, Désireé von la Valette Saint Georges, a descendent of the man who commissioned the building of the city, insisted the Grand Master’s family had always carried the name as de La Valette and not de Valette.

Mr Xuereb quoted French memoriologist Pierre Nora saying that history researchers may speak in the name of science, knowledge, formation, practice, habit and craft, but do they also speak on behalf of memory?

“It might be wiser to consider what the nation has remembered collectively for more than four and a half centuries before we rush to change names. After all it is a detail that won’t contribute anything new to history,” Mr Xuereb said.

The new statue in Valletta was a “good step in the right direction”, he said. However the decision to name the small square that hosts the Grand Master as de Valette “seems to have been taken following research by one person into our archives about the Grand Master.

“Is this the way the authorities take decisions about prominent public spaces?

“What is at stake here is not the naming of a secondary square in Malta’s capital city, but the collective memory of the Maltese and the international community,” Mr Xuereb insisted.

He said many appreciated Dr Bonello’s enthusiasm and love for archival revelations on the Knights of Malta and no one doubted his assertion that the Grand Master was in the habit of signing de Valette during his lifetime.

There was other historical evidence too that showed it seemed correct to say that La Valette used to sign de Valette, he said. “Perhaps his family assumed a change in the name later or some members preferred other ways of using their name... But again we fall back on the collective memory.”

While historians might prefer to use de Valette to refer to him correctly, he said, the public on the other hand might prefer to keep referring to him in the popular way that the whole world came to know him and his family after his death.

The Grandmaster himself was the son of Guillot de La Valette-Cornusson and French history researchers referred to his brother, Bishop of Vabres, as François de La Valette.

Also, according to the Dictionnaire de la Noblesse (1770) by FA Aubert de la Chesnaye-Desbois, a certain Jean de La Valette was presented to the Grand Prieur de Toulouse in 1606 and admitted as Chevalier de Malte when he was 12.

Mr Xuereb said that as with several surnames all over the world, aristocratic families in France seemed to have used slightly different names in different circumstances or over time, adding or dropping a proposition or article.

Some in fact floated the idea that descendants of Malta’s La Valette experienced such a change during the 16th century, he said.