It is indeed remarkable that one of the great steps in human evolution – the development of organised religion – took place in the Maltese islands during the period 3,600-2,500 BC. It is the declared hypothesis of present-day archaeologists and social scientists that, in Europe at least, there is little conclusive evidence of organised communal religious cult. There could have been some form of deity but this was enshrined in homes or in some small local tribe but nowhere on such a giant scale as on our islands.

Over the centuries, Malta appears as an island of glamour and mystery. It must have been an exceptionally sacred place in the third millenium BC; in fact, one comes to the conclusion that it was chosen as a sacred island, devoted to the Mother Goddess, whose priests exercised a great sway over its inhabitants with ornate rituals and sacrificial offerings so beautifully expressed by Gozitan poet Ġorġ Pisani in F’Ħaġar Qim and Il-Ġgantija.

The structures gradually evolved from the small but impressive Ta’ Ħaġrat Temples in Mġarr (c. 3,800-3,600 BC), with their single-cell temple already showing familiar architectural features, down to the huge Tarxien Cemetery phase (c. 2,500-1,500 BC). The Maltese Temple Period is so unique that it suggests a state of complete isolation which decided its character, with priests in charge of a cult that could exert such power over people’s minds, and commit them to erect such marvels as the Tarxien complex and the Hypogeum.

The architecture of the Maltese neolithic temples developed in stages and as the religious rituals became more elaborate, the size and decorative motifs became more refined as in the beautifully-etched spiral motifs discovered at the Tarxien Temples (3,000-2,500 BC). In fact, this temple is a good example: it started as three small temples, but with the introduction of more rituals, they were enlarged and amalgamated to form a large structure with elaborate designs.

The power of the priest in our sacred isle is also seen in the underground labyrinth known as the Hypogeum in Ħal Saflieni (Paola), a World Heritage Site, consisting of a series of passages and chambers on three different levels, with the oracle’s cubicle in the Holy of Holies. This extraordinary culture has excited and baffled re­nowned archaeologists who link it with our fascinating entry into the Punic cult and finally in Christian religion, as evidenced in the early catacombs at Tad-Dejr, St Paul’s catacombs, those of St Agatha under the Rabat plateau, and other paleo-Christian sites scattered all over the Maltese islands.

It is not difficult to conclude that from time immemorial Malta has been acknowledged as a sacred isle. The presence of megalithic temples is not restricted to the Temple Period, because during the Punic phase (500-218 BC) there were other temples, perhaps the most famous was the Temple of Melqart/Herakles discovered at Tas-Silġ, Marsaxlokk.

This extraordinary culture has excited and baffled renowned archaeologists

It was identified by means of an inscription on a marble candelabra (also known as Cippus) with a bi-lingual inscription in Punic and Greek with a dedication to Melqart/Herakles. The combined result of these ritual and funerary archaeological remains surely construct the religious biography of the Maltese islands. 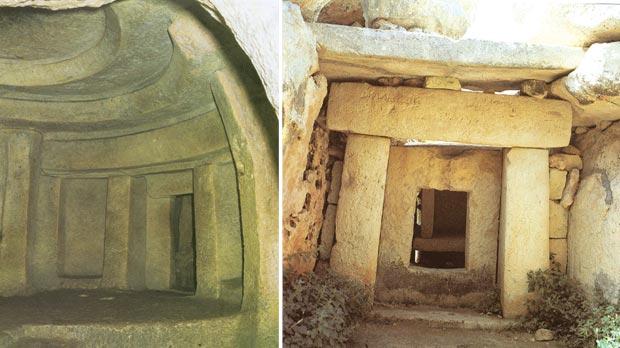 The Hypogeum: view of the Holy of Holies, an imitation of the temples above ground. Right: Mnajdra Temples: view of the middle temple with porthole slab.

During the Roman period, the great Roman orator Cicero relates how during the Punic War, an admiral of the Punic fleet landed in Malta and plundered the ancient celebrated temple of Juno at Tas-Silġ, taking a number of enormous elephant’s tusks from there. He presented them to King Massinissa; however they were quickly return­ed to the sacred temple as soon as it became known that they were stolen from this sacred site. Cicero, in a scathing attack, states that these tasks were later taken away by the Governor of Sicily Caius Verres, together with a number of ivory statuettes of victory.

Malta’s paleo-Christian heritage with its hypogea and burial rites, is considered among the most important in the early Christian world, in particular because some of the rituals constitute a mixture of religious rites performed on the same site. These consisted of Christianity, Judaism and paganism, all within the same locality, reflecting their co-existence in late-Roman society.

According to Unesco, the mixed features of the Maltese catacombs are rarely equalled anywhere else in the Mediterranean. Our islands are rich in these types of burial sites which date to the late Roman and Byzantine period. Most of them are found under the Rabat plateau, but we find other hypogea used for Christian ceremonial burials scattered widely in the countryside and occasionally also in the urban contexts. The latest Byzantine Christian burial tombs to be discovered were at Tal-Barrani on the outskirts of Żejtun in July 1993. 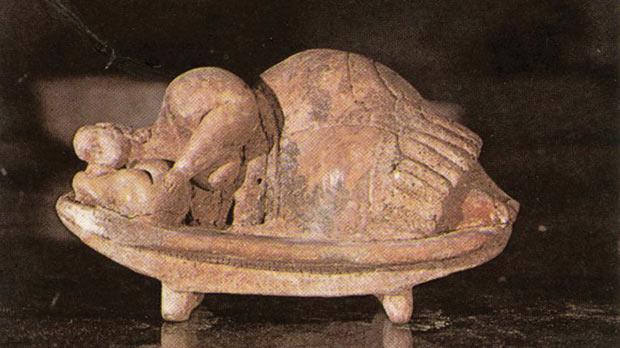 The Hypogeum, Paola (c. 3,000-2,900 BC the Sleeping Lady on a couch discovered in this underground temple.

The vast archaeological site of Tas-Silġ fell victim to the Christian Emperor Theodosius’s edict, who in the third millenium ordered the total destruction of all pagan temples. In the process, Juno’s famous temple was converted into a Christian three-aisled basilica with a baptismal font behind the apse.

This discovery resulted from the Italian Archaeological Mission of the University of Rome, which conducted extensive excavations between 1963 and 1972 on three major sites – Tas-Silġ, San Pawl Milqi and Ras il-Wardija in Gozo. The Christian basilica at Tas-Silġ is arguably the only above-ground paleo-Christian edifice in these islands that has opened a new and exciting chapter in the history of early Christianity in these islands, which had previously been represented by catacombs and hypogea. 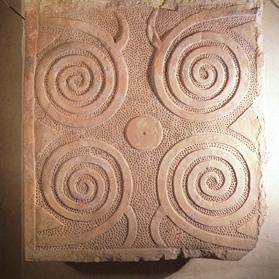 Tas-Silġ receives its name from the nearby church of Santa Maria tas-Silġ (Santa Maria ad Nives), built some time before 1654. The vast ruins display at least four distinct phases of occupation, namely prehistoric, Phoenician/Punic, Roman and Byzantine. It is commonly held that in this area the most significant monument dating from Carthaginian times was discovered between 1647 and 1655. I am referring to the two ex-voto candelabra with bi-lingual inscriptions previously mentioned.

The Tas-Silġ site is on the highest point of Delimara promontory facing Marsaxlokk Bay. According to Prof. Godfrey Wettinger, the toponym Delimara is a corruption of Dejr Limara.

The following section from the 1967 report by Prof. Cagiano di Azevedo, head of the Italian Archaeological Mission describing the excavations at Tas-Silġ, deserves to be quoted in full:

“This year’s excavations have revealed a monument that is so far unique in the whole Mediterranean area, namely the central and most sacred part of the fanum Junonis. The fanum consists of the ancient megalithic temple which was still used in Phoenician and Punic times and was later – at an as yet unascertained time in the last centuries before Christ – incorporated in an architectural structure of the Hellenic Period. The temple remained in use during the Roman times, including the Imperial Age, and was reused as a Christian temple with the addition of a baptistry, in late antique and Byzantine times, until its destruction at the time of the Arab invasion.”

Furthermore, Prof. Mario Buhagiar, an authority on the Maltese paleo-Christian hypogea and related scholarship, points out that: “The great deal of Byzantine pottery and related material found at Tas-Silġ suggests a flourishing Christian life between approximately the late fourth and the early ninth century.” 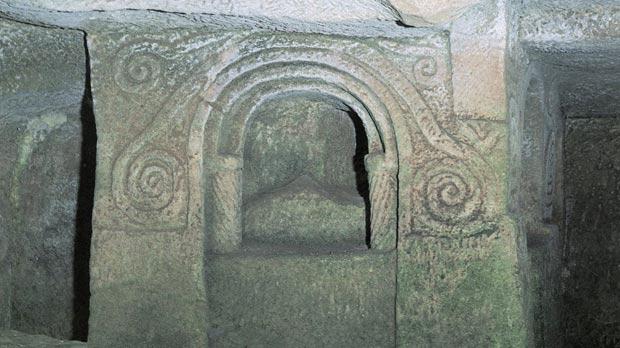 A canopied tomb at the Salina catacombs.

The importance of Tas-Silġ with regard to the history of early Christianity in Malta was highlighted by Mgr Prof. Vincent Borg in his paper ‘Christian heritage and Malta stone’. Prof. Mgr Borg refers to ecclesiastical history when Pope Gregory I (incidentally, a medieval fortress-like church known as San Girgor church is sited about 1.5km away in nearby Żejtun) advised the new Bishop of Malta, Trianus, before leaving for Malta: “To be accompanied by three or four monks from his community in Sicily lest he would find himself too lonely.” Mgr Borg concludes that this reference “throws some light on a monastic way of life that had been introduced in the island and explains the monastic ensemble at Tas-Silġ”.

There is need to stimulate and foster an increased awareness of Malta’s paleo-Christian heritage. This can be done by attending lectures on this topic that are occasionally organised by Heritage Malta and through site visits to Tas-Silġ, St Paul’s and St Agatha’s catacombs, Abbatija tad-Dejr, the Salini hypogea and other paleo-Christian sites scattered all over the Maltese islands.